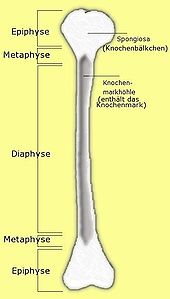 Longitudinal section through a fully grown tubular bone. During the growth, the ossified epiphyseal plate was located approximately where the transition between the epiphysis and metaphysis lies.

Magnetic resonance tomography: representation of the growth plates on a knee joint of a 10-year-old. Red for growth in length, yellow for growth in thickness

In juvenile vertebrates and humans, the long bones grow in the cartilaginous epiphyseal plate. This bone growth is called interstitial because bone cells ( osteoblasts ) migrate into the cartilage. As a result, the diaphysis becomes longer on the one hand and the epiphysis is shifted distally on the other. As soon as bone tissue completely replaces the epiphyseal plate, an individual's growth in length is complete.

There are special atlases that allow the chronological age of a child to be compared with the current skeletal age (Fig.) Due to the large number of growth plates on the hand bones, which all close at different times, there are special atlases for assessing the epiphyseal plates on the human hand skeleton , an allocation in half-year steps is possible. This means that, together with current length measurements of body size, seat size, leg length, etc., statements can be made about the expected overall growth of the child or adolescent. Due to the different gender development in girls and boys, the maturation process and thus the skeletal growth in girls is completed earlier. The first epiphyseal plates close in girls around the age of 14, the last joints in boys after the age of nineteen.

X-ray examinations of children born between 1915 and 2006 have shown that the point in time at which the growth plates close has been brought forward over the last century and thus - like puberty - occurs earlier and earlier. The reason for this is not apparent.

In contrast to adults, in whom the entire long bone is bony except for the joint ends covered with articular cartilage , the child's bone is very vulnerable, especially in the area of ​​the growth plate in children and adolescents. Under mechanical stress can damage give (z. B. here Apophysitis calcanei , Crohn Schlatter , X-leg ). With bacterial inflammation z. B. the upper respiratory tract can lead to bacterial abscesses in a growth plate. The capillary opening zone is a danger point for infection settlements. Severe forms of incorrect growth can occur if the diagnosis and surgical therapy with clearing out the abscess and specific antibiotic therapy is not carried out or not carried out early, which is the case above all in countries with an inadequate health system. A large proportion of global growth defects in extremities result from such traumatic or bacterial disorders in the epiphyseal plates.

Isolated injuries to the epiphyseal plate (e.g. epiphysiolysis ) and bone fractures near the joint that involve the epiphyseal plate, treated or untreated, can lead to defective growth. In the event of such injuries, it must be ensured during conservative or surgical treatment that the operation and the implants do not cause any further damage to the joints with possible incorrect growth. As with multiple epiphyseal dysplasia , growth disorders can also be hereditary.

Joint fractures of the ankle joint with the inclusion of an already partially closed epiphyseal plate are called transitional fractures . As it is multiplanar, your surgical treatment is a challenge. In addition to x-rays in 4 planes, diagnostics usually require computer tomography