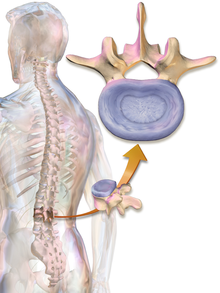 The average height of the intervertebral discs in the cervical spine is around 3 mm, in the thoracic spine around 5 mm and in the lumbar spine around 7 mm high. They are wedge-shaped, corresponding to the curvature of the human spine, they are thicker in the area of ​​the cervical and lumbar lordosis in the front and thicker in the area of ​​the chest kyphosis in the back. 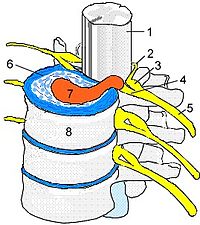 The annulus fibrosus , the fibrous ring of the intervertebral disc, consists of concentric layers of collagenous connective tissue fibers (outer zone), which gradually merge inward into fiber cartilage (inner zone). The fibers, which predominantly consist of type 1 collagen , have opposite angles of inclination. The intersecting connective tissue fibers of the outer zone attach to the marginal ridges of the vertebral bodies.

The nucleus pulposus is a cell-poor gelatinous tissue that contains 80–85% water. It contains few fibroblasts and type 2 collagen. Due to the high proportion of glycosaminoglycans ( chondroitin sulfate , keratan sulfate ), water is reversibly bound, so that the nucleus, like a pillow of water, is not compressible but can be deformed. The gelatinous nucleus is located at the position of the original segment of the notochord , but the tissue does not derive directly from it. According to another view, the nucleus gelatinous represents a remnant of the notochord.

Under constant load, the gelatinous nuclei lose fluid reversibly and thus lose height. As a result, a person can lose up to 1 to 2 cm in body height, including the arch of the foot even up to 3 cm. In the relieved state, the gelatinous nuclei absorb fluid again. This absorption and decrease of water is also the only way by which the intervertebral discs are supplied with nutrients, since after the age of 20 they no longer have any blood vessels when they have finished growing . The change in pressure between loading and unloading is a basic requirement for the metabolism of the intervertebral discs.

If there is a structural disorder of the cover plates during growth, material of the intervertebral disc can penetrate into the cancellous bone of the vertebral body (Schmorl nodules in Scheuermann's disease ). From the age of 30, degenerative processes lead to a change in the composition of the matrix and thus to reduced water retention. This results in cracks and crevices which, when subjected to pressure, can lead to bulging or even to the passage of material of the gelatinous nucleus through the annulus fibrosus. This is known as disc protrusion or herniated disc . The wear and tear of the intervertebral disc leads to reactive changes in the bone tissue of the adjacent vertebrae ( osteochondrosis intervertebralis , spondylosis deformans ).

The surgical removal of a herniated disc is known as nucleotomy , the removal of the entire disc with osseous stiffening and fusion of the adjacent vertebral bodies is called spondylodesis . In addition, the cervical and lumbar spine can be replaced by an intervertebral disc prosthesis .