Backbone is a redirect to this article. Further meanings are listed under Backbone (disambiguation) .

The spine , anatomically called the vertebral column , is in its entirety the central structural element of the vertebrates . It forms the bony center of the body and wrapped it in the spinal canal lying spinal cord . It is connected to the skull via the first head joint and to the pelvis via the sacroiliac joint .

In humans, the spine consists of 24 free vertebrae , which are movably connected via 23 intervertebral discs , and 8 to 10 vertebrae, which are fused together to form the sacrum and coccyx . Since it has to carry almost the entire body weight and distribute it on the legs, the spine is thicker at the bottom ( caudal ) than at the top (cranial) . Their multiple bends (double S shape) serve to dampen impacts.

The backbone ( ancient Greek ῥάχις rhachis ) refers to the totality of the palpable tips of the spinous processes of the vertebral bones running centrally along the back ; in a broader sense, however, the word is also used as a synonym for spine. The relation to the spine is described with the adjectives vertebral or spinal .

If you look at a person's spine from the side, it is noticeable that it is curved in the sagittal plane . The cervical spine curves forwards ( ventrally ) , the thoracic spine arches backwards (dorsal) , the lumbar spine forwards again, and the sacrum and coccyx backwards as a unit. The kyphosis in the chest area enables the lungs to develop properly, the lordoses in the cervical and lumbar spine compensate for the kyphosis and counteract axial forces and an unfavorable shift in the center of gravity. Overall, this results in a double S-shaped curvature. This shape of the human spine absorbs shocks when walking upright, similar to a spring bar. This reduces the vibrations that occur when walking and are lowest in the head area, including the brain.

When viewed from behind or in front, the spine forms an approximately straight line. If you have a sideways curvature, you have scoliosis .

MRI of the spine

From the top (cranial) to the bottom (caudal) the spine is divided into five individual sections (spinal column segments), each of which is composed of individual vertebrae ( Latin: vertebrae ). In humans these are the cervical spine (Pars cervicalis) with seven vertebrae, the thoracic spine (Pars thoracica) with twelve vertebrae, the lumbar spine (Pars lumbalis) with five vertebrae, the sacrum (Os sacrum) with five synostosis fused vertebrae and the tailbone (Os coccygis) with four to five fused vertebral rudiments (individual and depending on age). The human spine therefore consists of a total of 33 or 34 vertebrae. Since the five vertebrae that make up the sacrum, as well as the vertebral rudiments of the coccyx, are fused together (fused), it is often said that the spine is made up of 24 free (presacral) vertebrae (cervical, thoracic and lumbar spine) as well as the Sacrum and tailbone is made up.

The basic structure is typical for all mammals, but the number of vertebrae is different for each section depending on the species. Tail-bearing vertebrates have a different number of caudal vertebrae .

Structure of the vertebrae

Even if the individual vertebrae in the various spinal column sections differ somewhat in their external shape, the general structure is the same in all sections.

A transverse process arises on each side of the vertebral arch and has an articular surface in the thoracic area to which the ribs attach. The spinous process is on the back . These bony protrusions serve as attachment points for ligaments and muscles . In order to establish stable contact between each individual vertebra and its neighboring vertebrae, they are connected to one another via the small vertebral joints. These vertebral joints also have their origin in the vertebral arches.

The vertebral bodies have another important task beyond their purely stabilizing effect. Like many other larger bones, they form the cells of the blood in the bone marrow inside them .

In addition to the intervertebral discs, there are also real joints between the individual vertebrae, the vertebral arch joints . These are flat joints or facet joints that lie on the two lower (rear in animals) and the two upper (front) articular processes of successive vertebrae. The vertebral arch joints determine the direction of movement, while intervertebral discs and spinal ligaments limit the range of motion.

The mobility of the spine in the 3 movable sections is very different. In general, the mobility in the cervical spine is greatest in all directions, the thoracic spine is the most immobile because of its integration into the chest . Due to the almost vertical joint surfaces of the articular processes in the lumbar region, there is almost no rotation here; instead, strong ventral flexion (forward bending) and dorsiflexion (backward stretching) are possible. 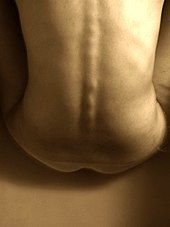 The smallest functional unit of the spine is also known as the (Junghanns) movement segment or Functional Spinal Unit (FSU).

A movement segment consists of two adjacent vertebral bodies with their vertebral arch joints and the intervertebral disc between them, as well as the associated ligaments, muscles, vessels and nerves (spinal cord and nerve roots).

Ligaments extend the entire length of the spine and stabilize it:

These six ligaments or ligament systems are of great importance for the stability of the spine. They are supported by the numerous back muscles. Ligaments give the spine support and flexibility. The stabilizing and elastic structures of the spine allow numerous movements.

Fractures of the spine can u. a. lead to kyphosis . If the spinal cord is damaged in the process, it leads to paraplegia .

The most common diseases are: degenerative changes in the functional group consisting of the intervertebral disc (→ herniated disc ) and the two adjacent vertebrae ( osteochondrosis intervertebralis ) , instabilities up to sliding vertebrae (spondylolisthesis), inflammatory diseases belonging to the rheumatic group (such as ankylosing spondylitis ) and deformations such as scoliosis . The most common growth disorder of the spine is Scheuermann's disease .

Chordomas are growths on the spine. Tuberculosis and other infectious diseases can also manifest on the spine.

The cervicobrachial syndrome is a painful condition that starts from the cervical spine and radiates into the arm.

A common malformation that occurs in around 10 to 20% of the population is the so-called spina bifida occulta , which occurs most frequently on the sacrum and the lumbar spine. A vertebral arch is not completely closed, but this usually has no consequences for the person concerned and therefore goes unnoticed. Spina bifida aperta , which also has a malformation of the spinal cord, is more serious, but also less common . Malformations can also affect the vertebral bodies: block vertebrae are two vertebrae that have grown together; in the case of half-vertebrae , the upper and lower halves of a vertebral body are not fused together. Block vertebrae restrict the mobility of the spine, while half vertebrae lead to scoliosis .

Skeletal dysplasias that only affect the spine, known as brachyolmia , occur very rarely .