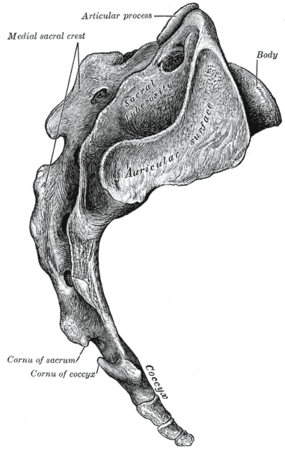 The tailbone ( lat . Medical and coccyx or coccyx ) of the human is the caudal ( "toward the tail directed") and lower portion of the spinal column and following the sacrum (sacrum). It serves as a starting point for various ligaments and muscles of the pelvis , especially the pelvic floor and the hip joints . Typically a fall on the buttocks or a strong kick can dislocate or break the tailbone . Both injuries are very painful.

The tailbone usually consists of four, varying from 2 to 8 coccyx vertebrae , which in most people are fused into a single bone through synostosis . The typical features of vertebrae are also largely regressed. The coccyx is a vestige of the caudal vertebrae of vertebrates considered that in the course of human development have regressed.

The dislocation ( dislocation ) of the coccyx can occur after a fall, kick, childbirth or, rarely, through prolonged incorrect stress such as cycling with the wrong saddle. The triggering event can be a long time ago, sometimes in childhood, and the symptoms appear years later due to compensation mechanisms. Those affected often have a long path of suffering before they are correctly diagnosed. Treatment is carried out by inserting the index finger into the rectum . The therapist grabs the tailbone with the index finger from the inside and the thumb from the outside and pulls it away from the sacrum dorsally (backwards) while pulling the sacrum slightly caudally (towards the feet).

Tailbone fractures (tailbone fractures, usually transverse fractures) also result from trauma such as kicks, falls on the buttocks or in difficult births. Symptoms of a fractured tailbone, in addition to severe pain, may include a visible hematoma or even rectal bleeding, especially when sitting . On examination, there is pressure pain in the gluteal fold . In contrast to the mere contusion of the coccyx and just as with a rare coccyx dislocation, a rectal examination reveals painful mobility and crepitation of the coccyx. The diagnosis can be confirmed by a lateral x-ray of the pelvis. Treatment is performed with analgesics and immobilization. A ring pillow can also be used for relief . Laxatives to help facilitate bowel movements may also be indicated. Surgical care may be required if the painful instability ( coccygodynia ) or rectal injury continues. In this extremely rare case, the distal bone fragment is surgically removed .

The tailbone teratoma is a tumor that can appear in embryos and young children.

The pilonidal sinus is a chronic inflammatory disease of the gluteal folds in the coccyx region. However, the disease is not causally related to the coccyx, so the German name “coccyx fistula” should be avoided.