This article deals with the term rudiment in biology; for the basic exercises on the drums see rudiment (drums)

As a rudiment ( lat. Rudimentum "beginning", "first attempt", "sample") is in the biology into the tribal development ( phylogeny ) partially or completely inoperable become back-educated, but still present feature ( organ , organ part, organ structure or behavior ) designated. Rudiments, in contrast to atavisms , which only occur in individual individuals, occur in many or all individuals of a species. In principle, rudiments can occur in all organisms and are considered classic evidence of evolution . The process of regression is rudimentation . It assumed the feature was in a functional state. Some rudiments are also associated with a change in function, as described using the appendix / appendix as an example . Rudimentation is caused by the fact that mutations can accumulate at points in the DNA that are not subjected to positive selection pressure without negatively affecting the fitness of the organism. In the long run, this can lead to the stunting of the corresponding trait in a population . The corresponding phenomenon is called regressive evolution.

Rudimentary organs in humans and animals

The back formed organs lose the creatures related to the lifestyle change their original functions in the course of evolution, but they may still have tasks (for example, lymphatic function in the human appendix of the cecum). Rudiments can sometimes also cause health problems. In humans, these are the wisdom teeth (today: misalignment, inflammation) or appendages (today: " appendicitis ").

An example of partial loss of function is the pineal gland in mammals, including humans . In earlier stages of development it was meaningful as a light-sensitive vertex eye (also: parietal organ, "third eye") directly through the skin, as is the case with some amphibians, birds and reptiles today. In mammals it is important for the release of melatonin and the day-night cycle. 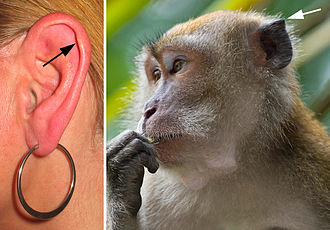 Left: the point pointed to by the arrow is a Darwin ear hump. Right: A homologous point in a crab monkey .

Skeleton of a baleen whale with rudimentary rear extremities 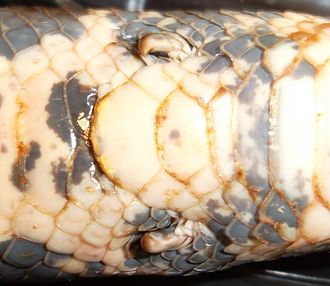 An example here is the rudimentation of the stamens in the pharynx (Scrophulariacea). In these, the number of stamens decreases from originally five in Verbascum to four in Digitalis to two in Veronica officinalis within a progression series , but the functionless systems of the remaining stamens are still developed.

Many of the reflexes of human infants represent rudimentary behavior that was previously essential to survival in the evolution of the human race. This applies, for example, to the grasping reflex . In the case of baby monkeys, it enables the newborn to cling to its mother's fur while she moves from branch to branch or moves on all fours on the ground. In human babies, the grasping reflex is useless for holding onto the largely hairless body of its mother, who also no longer moves on four, but on two legs and carries the baby in her arms anyway. The human grasping reflex is already developed from the 32nd week of pregnancy, its function in the womb appears even more absurd. The time at which the reflex occurs, however, corresponds to the gestation period of the related species (for example bonobos from 220 to 250 days), that is, it is developed to this day at the point of development from which it was vital for the ancestors.