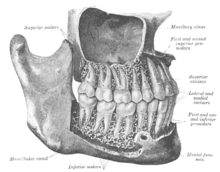 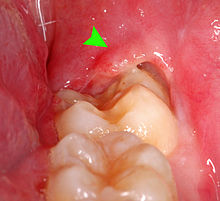 Wisdom teeth with crooked roots. Sometimes the number of roots is also abnormal.

The wisdom tooth ( synonym of third molar , Latin dens sapiens, dens serotinus 'coming late' ) is the eighth tooth in the human dentition when counted from the middle . Normally a person has four wisdom teeth, one in each dental quadrant .

The change of teeth initially ends with the eruption of the second molar at the age of 12. Wisdom teeth develop later. In some people, mineralization of the wisdom tooth germ is only detectable in the X-ray at the age of 14. They usually only break through in adulthood, sometimes not at all. The name “wisdom tooth” in German is derived from this late breakthrough . The name originally comes from the Persian doctor Avicenna (980-1037) from the Qānūn fī ṭ-Ṭibb (القانون في الطب'Canon of Medicine'), which were translated into Latin as dentes intellectus in the Toledo School of Translators. In Greek they were called Sophronisteres by Kleanthes . In other languages ​​the name is also related to wisdom or understanding, e.g. B. in Japanese ( 知 恵 歯chieba ). However, there are also other linguistic derivations, such as “crouching tooth” in Thai , “youngest tooth” in Indonesian or “unknown to parents” ( 親 知 ら ずoyashirazu ) in Japanese , based on the assumption that the teeth do not appear until the children are out have already moved out of the home. They are called Arabic ضرس العقل / ḍirs al-ʿaql  / 'Tooth of the Spirit', in French dent de sagesse , in Italian dente del giudizio .

Wisdom teeth deviate from their characteristic anatomical shape more often than other teeth. Wisdom teeth appear with three or five cusps. The number of roots is also different. They can grow together or be bent like a hook, so that extraction of the teeth, if necessary , is difficult. In rare cases, excess wisdom teeth, so-called distomolars, also known as nines, grow behind the wisdom teeth.

The considerable differences in the shape and time of the eruption of the wisdom teeth, as well as the occasional complete absence of the tooth systems, is possibly the result of an evolutionary development. It is now widely recognized that the original placenta animals had three incisors , one canine , four premolars and three molars in each half of the jaw . Their tooth formula is therefore 3 · 1 · 4 · 3, their number of teeth was 44. All of the Old World monkeys living today , including chimpanzees and humans, on the other hand, have the tooth formula 2 · 1 · 2 · 3, which means 32 teeth. In modern humans, wisdom teeth can therefore be viewed as a rudiment . The reduction in the number of teeth, which is still ongoing in humans, was - as the fossil Ardi shows - associated with a reduction in the size of the snout and canine teeth several million years ago .

Spatial analysis of the wisdom tooth according to
Pell and Gregory 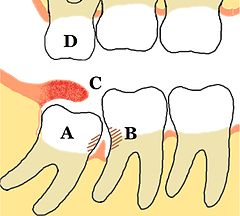 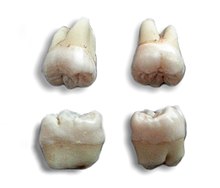 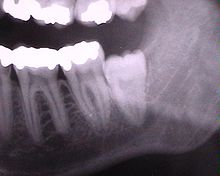 The upper wisdom teeth are shifted in the distal direction. The lower left wisdom tooth (in the picture: right) is shifted horizontally.

Classification according to Pell and Gregory

The imbalance between jaw size and number of teeth leads to the jaw angle, the transition from horizontal to ascending branch of the mandible to the fact that they are frequently not sufficient space more and completely retiniert remain or only partially break through (partial retention). Fully retained teeth usually remain symptom-free, while partially retained teeth often lead to inflammation (see: Dentitio difficilis ), which can develop into abscesses . The cause of such an inflammation is the formation of a hood-shaped gum pocket , which is difficult or impossible to clean. Bacteria can quickly multiply in this pocket with the help of decomposing food particles. As a result, the affected teeth must be removed frequently. Caries can also be favored if wisdom teeth are in contact with a neighboring tooth in such a way that it is difficult to brush there.

In extremely rare cases, the inflammation can turn into a phlegmon , which can be life-threatening.

If the wisdom teeth break through only in one jaw, they lack the antagonist ("opponent"). As a result, they elongate over the occlusal plane until they finally meet the opposing jaw. Wisdom teeth can become "sliding obstacles" that can lead to tooth damage, nocturnal teeth grinding ( bruxism ) and temporomandibular joint problems.

“Retiniert” ( Latin retinere re , back, tenere , hold) is the term used to describe a wisdom tooth that has not erupted in accordance with its age. Whether or not a wisdom tooth is retained depends on the age, gender and level of development of the patient. The assessment on the basis of an X-ray is not always clear and requires a follow-up.

The following X-ray images are excerpts from orthopantomograms (OPG):

A tooth is removed by loosening the tooth in its tooth socket . For this purpose, the tooth is moved back and forth slowly and with measured force by means of a lever or pliers, whereby the alveolar bone is stretched and the alveolus is expanded. In the case of single-rooted teeth, a rotary movement can also be carried out, whereby the Sharpey fibers , by which the tooth is suspended in the alveolus, tear. 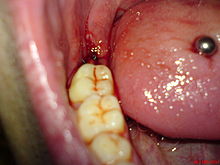 Many wisdom teeth are regularly in the row of teeth. If necessary, they can be extracted like other teeth . In the lower jaw, in the region of the mandibular angle, the bone is compact and buccally thicker, which means that the alveolus cannot be expanded so easily. In the upper jaw, the bone surrounding the wisdom tooth is cancellous . This makes extraction easier.

The osteotomy (surgical removal) of a wisdom tooth is usually carried out under local anesthesia by a surgically experienced dentist , an oral surgeon or an oral surgeon . In the case of very anxious patients, if they wish, analgesic sedation can be carried out in appropriately equipped doctor's offices , which calms the patient down and reduces his or her awareness.

Surgical removal takes place through an incision on the alveolar ridge, if necessary with a so-called relief incision towards the buccal. After the bone or the tooth has been completely or partially exposed by folding away the gums , the bone covering the tooth is, if necessary, milled away using a bone cutter (Lindemann cutter ) while cooling with an isotonic saline solution . The opening must be large enough for the tooth to fit through.

If the tooth is very firmly anchored in the jaw, the tooth is displaced in the jaw, or the extraction opening is too small, it may be necessary to separate the tooth from the jaw before it is removed. If the wisdom tooth is surgically removed as a tooth germ before it erupts, one speaks of a germectomy . The resulting wound is closed with surgical sutures . 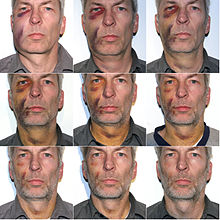 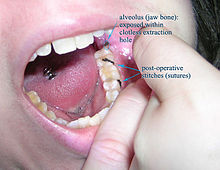 View of the upper jaw in the cranial direction

The following complications are less common:

Behavior after the operation

As a precaution, a pain medication should be prescribed. The pain reliever should not contain acetylsalicylic acid (such as aspirin), as this has a negative effect on blood clotting. Patients with anticoagulant treatment ( Phenprocoumon , Marcumar) can temporarily be switched to low molecular weight heparin preparations , but the current S3 guideline "Dental surgery under oral anticoagulation / platelet aggregation inhibition" sees no advantage here and votes in favor of leaving the original anticoagulant medication. The wound usually closes within the first few weeks after treatment. The treating doctor may prescribe an antibiotic for particularly complicated procedures or if you have had a previous infection .

In the first time after the operation, correct behavior is important for good wound healing and the reduction of the unavoidable sequelae of the operation: