This article covers the symptom of the disease. See also: Oedeme , Ödemiş , place names, or Odem .

The edema (from ancient Greek οἴδημα oídēma , German 'swelling' ) or the "dropsy" is a swelling of body tissue due to an accumulation of fluid from the vascular system .

If the balance between filtration on the one hand and absorption and lymph drainage on the other is shifted in favor of filtration, then more fluid remains in the tissue. The result is an accumulation of water in the extravascular space between the cells , i.e. an edema. 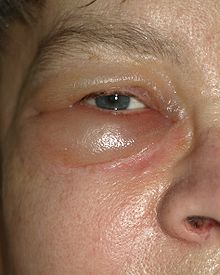 Edema is usually the result of an underlying disease, i.e. a symptom in the narrower sense , e.g. B. in cardiac or renal insufficiency or liver cirrhosis . Venous outflow disorders can lead to localized edema, a leg vein thrombosis e.g. B. can lead to swelling of the affected leg. If the fluid in the tissue is not drained sufficiently via the lymphatic system, this is called lymphedema . Edema also occurs when the concentration of blood proteins ( albumins ) decreases ( hypoalbuminemia ). This happens z. B. in hunger edema (insufficient protein intake) and in nephrotic syndrome , which is characterized by high protein losses via the kidneys . The escaping liquid is low in protein and is called transudate .

Inflammatory or allergic processes can lead to increased permeability of the capillaries . The liquid that escapes into the tissue is rich in protein and is called exudate .

Medicines (e.g. cortisone , antidepressants or calcium antagonists ) can also contribute to the development of edema. Edema can also be caused by hormones.

Another cause is prolonged exposure to only sitting or standing (orthostatic edema), especially if this is associated with reduced movement (inactivity edema) and the tissue water can no longer be removed by the muscle pump . This is a common occurrence, especially in old age: e. B. one-sided in the paralyzed leg after a stroke, but also often in wheelchair users due to the lack of regular movement of the legs.

In rare cases, an infection with the parvovirus B19 can cause edema.

Two basic steps are required for edema to develop:

The loss of fluid into the tissue leads to a reduced filling of the arterial vascular system, which however only contains about 15% of the total blood volume . The total blood volume can therefore be increased in edema if only the venous blood volume is affected. Reduced cardiac output, such as B. in heart failure, or an expansion of the blood vessels (vasodilation) , such. B. in liver cirrhosis or during pregnancy , can lead to a reduced filling of the arterial vascular system. This is registered by arterial stretch receptors in kidney corpuscles , aortic arch and carotid artery (common carotid artery) . The result is an activation of the renin-angiotensin-aldosterone system in the kidneys, a stimulation of the sympathetic nervous system and the release of vasopressin in the hypothalamus . Ultimately, this leads to increased reabsorption of water and sodium in the kidney tubules and thus to renal edema .

In the case of heart failure, the venous system becomes overcrowded, which is registered by stretch receptors in the left atrium , which leads to the release of atrial natriuretic peptide and thus actually to increased sodium and water excretion. The activation of the arterial stretch receptors predominates, so that in cardiac edema, sodium and water are stored in the end.

The localization of the water retention provides further clues: If there is a shortage of breath, pulmonary edema may be present if the left ventricle fails. Water retention in the abdomen ( ascites ) indicates liver disease. Leg swelling can be caused by right ventricle failure, chronic kidney failure, venous disease, or lymph drainage disorders.

The timing is also important: women can experience periodic water retention during the menstrual cycle . However, these should not be treated with diuretics , as the treatment is more likely to worsen symptoms. 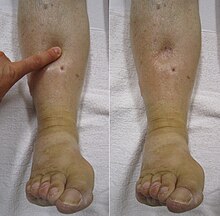 In pulmonary edema, humid rattling noises can be heard when listening with the stethoscope (auscultation) . A lung x-ray is required for a reliable diagnosis, as other lung diseases such as For example, pulmonary embolism can cause similar symptoms. Swelling of the body can indicate water retention in the body cavity ( ascites ) in cirrhosis of the liver, nephrotic syndrome or right heart failure. A muffled tapping sound can be heard when tapping ; tapping the abdominal wall may trigger a wave of fluid. The diagnosis can be confirmed by an ultrasound examination. Water retention in the abdominal wall and flanks ( anasarca ) can occur in severe heart failure or advanced kidney failure. Impressive swelling of the legs, as already described by Alexander von Tralleis (525–605) as a symptom of edema, indicate venous drainage disorders, heart failure or kidney disease, a one-sided swelling of the leg suggests a venous disease. In contrast, swelling of the legs that cannot be impressed is found in lymphatic drainage disorders and in myxedema due to an underactive thyroid . Swelling of the eyelids can indicate protein loss from the kidneys.

An increase in serum creatinine indicates kidney disease. If the protein excretion in the urine of adults is more than 2.5 g per day, it is most likely a nephrotic syndrome.

Treated depending on the cause. Cardiac , renal and hepatic edema are flushed out with diuretics . Oral administration is usually sufficient; intravenous administration is preferred only in the event of resorption problems or in emergencies ( pulmonary edema ). The weight reduction should not be more than 1–1.5 kg per day. With a higher edema washout, the risk of hypovolemia and thrombosis increases significantly. If there is no elimination due to kidney failure, the fluid balance must be controlled by dialysis . Lymphedema may be a. Treated physiotherapy with lymph drainage or vacuum therapy , edema due to protein deficiency through substitution. Allergic processes are treated symptomatically with antihistamines and cortisone.