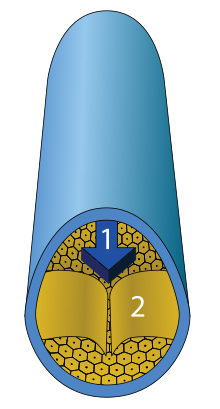 Cross-section of a vein with vein wall, flow direction and venous valve

The veins of the systemic circulation carry oxygen -poor blood, those of the pulmonary circulation of oxygen-rich blood. Oxygen-deficient blood is darker than oxygen-rich blood. The bluish appearance of the cutaneous veins is not solely related to the oxygen content of the venous blood. Skin veins appear blue mainly because the long-wave red light penetrates the tissue more deeply than the blue and is thus absorbed by the dark blood of the veins . The short-wave blue light, on the other hand, is reflected ; thus the veins appear blue in a tissue depth of 0.5 to 2 millimeters ( see also blue blood ). Since arteries are much thinner than their accompanying veins with thicker walls, they are not visible through the skin.

The blood pressure in veins is significantly lower than in the arteries ; along with the capillaries and venules , they belong to the low-pressure system of the blood circulation . The skeletal muscles act as a natural pump for blood flow in the veins . With every tension, the muscles press the blood against gravity from below towards the heart. Dozens of venous valves act like check valves to ensure that the blood does not fall back down when the muscle relaxes.

Like all blood vessels, veins show a typical three-layer wall in tunica interna (intima), tunica media (media) and tunica externa ( tunica adventitia ) . The wall of the veins is usually thinner than that of the corresponding arteries , especially the tunica media. Here, the smooth muscle cells are pushed apart into strands by collagenous connective tissue , which makes the media appear more loosely than in arteries. The media shows an indicated two-layer with an inner spiral and an outer flatter winding. Some large veins, such as the inferior vena cava , only have longitudinal muscles. Larger leg veins such as the great saphenous vein are subject to high hydrostatic pressure , which is why they have a strong wall similar to arteries.

Effect of the venous valves

In contrast to arteries, many of the small and medium-sized veins are equipped with venous valves so that the blood does not flow back. There are no venous valves in the veins of the head, intestines, vertebral canal and large veins near the heart. In the case of the arteries, the heart's pumping pressure is sufficient to prevent backflow.

Venous diseases are the subject of phlebology . Various methods are available to examine the veins. 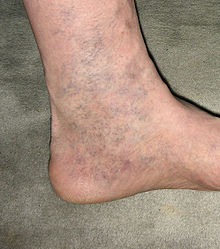 Spider veins are dilated veins in the top layer of the skin that occur due to predisposition or as a result of chronic venous congestion. They are bright red when they are very fine and blue-red when they get larger. Since the veins are dilated and tortuous, spider veins meet two of three criteria for varicose vein formation (dilated, tortuous, without valve function).

Spider veins can be the only change in the veins in the affected person and are then primarily of a cosmetic nature. They can already appear in childhood and almost always increase in the course of life in affected people. Often there are varicose veins at the same time, but this is not mandatory. The simultaneous existence of chronic venous insufficiency is also common, but not mandatory. Special forms of the spider veins are z. B. the enlarged veins on the nose and face (couperose) and enlarged veins in the skin on the chest and upper body in chronic liver congestion.

Varicose veins are dilated, tortuous veins whose valve flaps are no longer functional. Superficial varicose veins are easily visible or palpable and snake in the subcutaneous fatty tissue (mostly) along the leg. Varices of the deep venous system can only be seen on ultrasound or phlebography . The expansion of the veins leads to an incomplete closure of the venous valves, which is referred to as valve insufficiency. The normal blood transport in the veins, directed towards the heart, requires the interaction of muscles and functioning valves. Since this is no longer possible in varicose veins, the hydrostatic pressure on the vessels in the lower part of the body increases continuously depending on the position. The "transmural" pressure, i.e. the difference between the pressure in the venous system and the surrounding tissue, leads to increased water and the dissolved components seeping through the vein wall and accumulating in the tissue, mostly of the leg ( edema ).

Phlebitis (inflammation of the veins)

Phlebitis is inflammation of the veins. The vessel and its surroundings are painful, red, swollen and overheated. With superficial veins, the diagnosis is easy to make. In the case of deep phlebitis, the diagnosis can hardly be made even with ultrasound. It is still unclear what the cause of phlebitis is, whether it is invading germs, an autoimmune inflammation or rather a mechanical inflammatory irritation.

Thrombosis is the blockage of a vein by a blood clot that forms in the veins and adheres to the vein walls. These blood clots become dangerous when they detach and are washed into the lungs . There they then lead to a pulmonary embolism through an occlusion of a pulmonary artery . The threat becomes understandable when you consider that such a clot can weigh up to 5 g and, during the passage through the heart, breaks into many individual fragments, which then reach the lungs like a shotgun.

An accumulation of water due to venous diseases, the so-called venous edema , is usually found in the legs. Edema is a localized or widespread pathological accumulation of aqueous (serous) fluid in the tissue crevices. Typically it is not there when you get up, but it becomes more and more noticeable as the day progresses, especially if the person concerned stands a lot or sits for a long time.

After years of venous congestion, an “open leg” or “lower leg ulcer ”, the venous leg ulcer, is a special form of a leg ulcer. These ulcers are usually above the medial malleolus. They are difficult to treat and slow to heal.