Absorption ( latin absorptio , absorption ' ) referred to in the physics generally receiving a wave ( electromagnetic waves , sound waves ), a single particle or a particle stream ( particle beams ) in a body or substance. In some fields of work, "absorption" is used with slightly different meanings depending on the effect being considered, for example for X-rays and gamma rays and for free neutrons.

Absorption reduces the transmission of a wave or radiation through a substance or body. Other weakening effects such as scattering or reflection are summarized in optics with absorption under the term extinction , also known as absorbance .

When one substance is absorbed into another (more precisely: into a phase of the absorbing substance), a distinction is made between " adsorption " and "absorption"; the common generic term for this is sorption .

Absorption of waves and particle beams 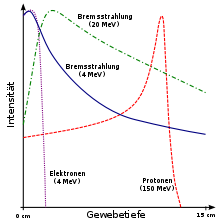 When waves are absorbed in an absorbent, homogeneous material, the probability of absorption per unit of distance is the same at low energies at every penetration depth. Then an exponential law applies, the Bouguer-Lambert law - often called Lambert's law for short (not to be confused with Lambert's cosine law ). If I 0 is the original current, the current I ( d ) still present after passing through the layer thickness d is :

(Derivation of the law: see absorption law ). Here µ is the absorption coefficient that depends on the properties of the absorbing material and often also on the energy (quantum energy, particle type and speed) of the radiation . Its reciprocal value is the depth of penetration . From it the thickness of the half- value layer can be calculated.

However, side effects often occur that lead to completely different laws, as can be seen in the adjacent picture. There are different reasons for this:

The earth's relatively thick layer of air, together with its magnetic field, acts as a very effective absorber or particle deflector towards the earth's magnetic poles for high-energy particles from the sun or from space. Therefore, depending on the type and energy of the particles, the radiation activity in the Van Allen Belt increases sharply, and the earth's surface is very well protected. In the vicinity of the magnetic poles, these particles generate polar lights (see also: air showers ).

The absorption of sound takes place by converting the power of the sound (airborne sound, structure-borne sound , also earthquake waves) into thermal energy in a damping medium or at boundary layers - e.g. B. between air , in which the sound propagates, and a solid surface - instead. Among other things, it is dependent on frequency and temperature. Sound absorption in air is caused by various thermodynamic processes; it is considerably higher in gases than in solids.

When electromagnetic radiation can be absorbed in a material, the strength of the absorption material is described by a parameter, the degree of absorption , which is usually of a plurality of parameters (temperature, wavelength) is dependent. 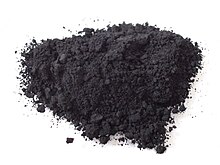 The light absorption on surfaces or when passing through matter depends on the material and the frequency of the light. The attenuation of the intensity along the path is proportional to the absorption coefficient of the irradiated material and its thickness. This results in the Lambert-Beer law .

Depending on the possible band structure of the molecules, different frequency ranges of the light can be absorbed differently, i. In other words, depending on the color, the strength of the absorption varies (see resonance absorption , Fraunhofer lines ). Adjacent frequency components are either reflected or transmitted depending on the material and the angle of incidence of the light . If, for example, a surface that appears yellow is irradiated with white light, the green and red light is reflected / transmitted and blue light is absorbed (see color synthesis ). When light is absorbed, the energy absorbed is usually converted into thermal energy . However, other mechanisms are also possible, such as the delayed release of light in the form of fluorescence , or the conversion into electrical energy through the photovoltaic effect .

As already mentioned, the absorption is (partly strongly) dependent on frequency. The cause lies in the band structure of the material, in which photons of certain energies excite atoms or molecules that have quantum transitions with precisely this energy difference in the electron shell or in their molecular vibrations (mostly with infrared light).

The passage of light through a plate, including absorption, can be derived directly from the complex refractive index using the Kramers-Kronig relationships . In this way, the electromagnetic interaction is directly related to a material property.

The total absorption coefficient μ of aluminum ( 13 Al) for gamma radiation, as a function of the gamma energy, and the contributions of the three individual processes. The Compton effect predominates in the entire area shown. 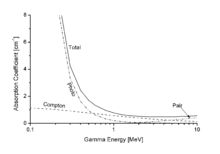 The total absorption coefficient μ of lead ( 82 Pb) for gamma radiation, as a function of the gamma energy, and the contributions of the three individual processes. The photo effect predominates with small energies; pair formation begins to predominate at 5 MeV.

Even when X-rays and gamma rays pass through matter, the probability of absorption is proportional to the thickness d of the penetrated material, as is the probability of scattering. This results in an exponential decrease in intensity with increasing thickness:

Often the absorption counts (only) those processes in which a photon gives off some or all of its energy. In the energy range of gamma radiation these are:

The electrons released from all three processes can, in turn, have an ionizing effect if they have enough energy.

Attenuation of the incident beam

However, “absorption” is sometimes also any process that removes a photon from the incident beam, with or without energy conversion. Then the Rayleigh scattering , which only changes the direction of flight of the photon, must also be taken into account for gamma and X-rays . The total effective cross-section is then

The so defined absorption coefficient, the linear attenuation coefficient, is to be used in the calculation of the exponential decrease described above. Even then, this only applies with certain idealizations, e.g. B. for a thin, linear beam. It does not apply to radiation through a thick, solid wall, because there is e.g. B. also comes to scatter into the beam.

The components of the air absorb at different wavelengths

In remote sensing , the term absorption refers to the uptake of electromagnetic radiation energy by the atmosphere or the earth's surface. In this way, energy is temporarily stored and emitted again in any direction in accordance with Planck's law of radiation . The earth's surface warmed up by the sun re-emits radiation in the mid-infrared wavelength range (around 8 to 14 µm). This radiation is absorbed by clouds or greenhouse gases and is delayed and re-emitted into space or back to earth ( greenhouse effect ). Therefore it gets colder on clear nights than on cloudy nights.

LIDAR is able to provide a layer profile of the concentration of trace gases. Special wavelengths are used here, which stimulate the molecules of the trace gases selectively and are thus absorbed and re-emitted. A profile of the wind speed can also be obtained ( Doppler shift of backscattered radiation).

Color or wavelength-dependent absorption of the earth's surface helps to differentiate between different coverages. The visible and infrared spectral ranges are used to determine types of vegetation and temperatures.

With satellite-based radar one can obtain surface profiles, but also determine wave frequency and height.

Radio waves for message transmission or with radar are absorbed, reflected and scattered in the atmosphere by free charge carriers (ionization) as well as rain and snow or hail.

Medium waves propagate poorly during the day (ionization of the lower atmosphere by solar radiation), but they do so well at night. Because absorption in the plasma is polarization-dependent , left-hand circular radio waves of large wavelengths (medium and short wave ) are almost completely absorbed in the northern hemisphere . Only right-hand circular waves are reflected from the bottom of the ionosphere if they hit at a sufficiently flat angle; In this way, short waves travel around the entire earth.

While the absorption of microwaves in precipitation often causes major problems in the transmission of messages ( directional radio , up- and down-links of satellite communication ), precipitation radar (ground-based) or weather radar on board ships and aircraft can detect precipitation areas and even determine the size of the drops or hailstones and the wind speed. Here is the Rayleigh scattering , the wavelength, the more scattering particles with dimensions of the lower substantially below the wavelength - prevail. The wind speed is determined using the Doppler shift of the backscattered waves.

During solar storms , radio traffic can come to a standstill if the atmosphere is ionized down to the lower layers and absorbs radio waves.

The term absorption is not used uniformly in connection with neutrons either. From the point of view of nuclear physics, absorption can be defined as any absorption of a free neutron into an atomic nucleus , regardless of how the nucleus behaves afterwards. A uranium nucleus can z. B. split after absorption . This releases 2 to 3 neutrons; the absorption has then led to an increase in neutrons.

In reactor physics and the physics of fusion reactors - blankets, on the other hand, it is often a matter of calculating a “neutron balance”. Here under absorption (only) those processes are summarized that reduce the total number of free neutrons in the volume under consideration, such as B. (n, γ), (n, p) or (n, α) reactions . Processes like nuclear fission or (n, 2n) reactions, on the other hand, are part of production because they increase the number of neutrons.

Neutron absorbers , which reduce the number of neutrons, are used, for example, to regulate and switch off the nuclear fission chain reaction in the reactor core of a nuclear power plant.