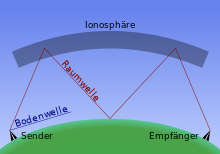 As medium waves (MW or MF for engl. Medium Frequency or on receivers often with AM designated for "amplitude modulation") refers to electromagnetic waves in the range of 300 kHz (1000 m wavelength ) to 3000 kHz m with a wavelength of 100.

Because of its good reflective properties in the ionosphere , medium waves are particularly suitable for long-distance transmission and are used by radio , radio amateurs ( 160-meter and 630-meter bands ) and marine radio . The medium wave radio used for historical reasons, usually the amplitude modulation because AM with the simplest of means ( Crystal receiver can demodulate), which was crucial in the early years of broadcasting.

A medium wave transmitter can emit both a ground wave and a sky wave (depending on the antenna shape). The bump spreads along the earth's surface and, depending on the frequency used , has a range of up to 300 km around the transmission mast . Nowadays, self-radiating transmission masts and T-antennas are mostly used as transmission antennas , but also cross dipoles with vertical radiation. Grounded towers, vertical traps suspended from masts or long wire antennas are used less frequently.

The sky wave plays a special role in remote reception. This is emitted into the earth's atmosphere and is reflected back to the earth's surface by the ionosphere. During the daytime hours, the ionosphere attenuates the medium wave signals because it contains a large number of unbound electrons. In the night, when the damping by the D-Region becomes weaker, the range increases to over a thousand kilometers. Therefore, a greater number of medium wave stations can be received at night than during the day. In Europe, medium wave transmitters from the American continent and the Far East can even be received during the night.

If space and ground waves are received together, there will be disturbances due to interference , near fading .

The medium wave range usually used for radio broadcasts is between 525 kHz and 1705 kHz (corresponding to approx. 570 ... 175 m wavelength), that is, its total extent over all bands allocated worldwide according to the Geneva Wave Plan (1975) , RJ81 and RJ88 ( ITU - Agreements) that are slightly different from each other. The lowest frequency ever used in Europe was that of the BR at 520 kHz (approx. 576.5 m) (here due to one of many special assignments that were only given for very low power transmitters). The highest frequency in Europe was used until July 1, 2012 by Vatican Radio on 1611 kHz (186 m).

Use of medium wave in Europe

On April 1, 1923, the telephone factory Czeija & Nissl started a test transmission program in Vienna 20, with a 100 W transmitter from Oskar Koton ; from July 1st in Vienna 9 under the brand Radio Hekaphon - Welle 600 (meter wavelength; 500 kHz) from a transmitter licensed for wireless telegraphy from 1914 at the Technological Trade Museum .

On February 19, 1924, a group led by Oskar Czeija received the state license, which resulted in RAVAG ; Radio Wien's first broadcasts were made in the second half of the year by a station taken over by Koton. There was also continuity among the performers. In 1938, RAVAG loses its independence, in the last days of the war a resistance transmitter goes into operation, the four occupiers each run their own programs, the Americans build the Kronstorf transmitter mast (dismantled in 2010), the tallest structure ever erected in Austria, to move as far as possible into the Soviet zone to be received. The ORF is founded in 1958.

Later, pirate stations could also be heard on medium wave in German-speaking countries. In the 1990s, however, pirate and private broadcasters start operating on VHF .

Broadcasting in Germany began on October 29, 1923 with a medium-wave transmitter on the Vox house (750 kHz).

By switching off many powerful radio stations in the medium wave range, fewer radio stations from Europe could be received in 2010 than in the mid-1980s. In Germany, almost all public medium wave transmitters were switched off between 2012 and the beginning of 2015. The money saved as a result must be used to expand DAB + .

The EU project "R-Mode Baltic" has been running since October 2017. His goal is to develop a "ranging mode system" for ground-based, maritime navigation as a failure option. It should be available if any or all of the global satellite navigation systems are disarmed, disrupted or unavailable. "R-Mode Baltic" is to be tested for the Baltic Sea on the medium wave frequency band.

Analog video recorders, which work according to the color-under method , store the color signal of the video image in the frequency range of the medium wave at 600–1000 kHz. Almost all analogue home video recorders such. B. VHS and Video8 .