Radio Vatican ( Italian Radio Vaticana , RV) was the international broadcaster of the Holy See , which had the task of reporting on the activities of the Vatican , the Roman Catholic Church and other churches in general, as well as conveying Catholic teaching. The station's independence ended at the beginning of 2017, when Vatican Radio was incorporated into the Dicastery for Communication of the Holy See. On December 17, 2017, as part of the restructuring of the entire media offering of the Vatican, all services of Vatican Radio were integrated into Vatican News , the multimedia internet portal of the Vatican State. Since September 29, 2019, the audio contributions from Vatican News have been published again under the “Vatican Radio” brand.

After the Lateran Pacts were signed , preparations began to set up a church radio program. Vatican Radio was founded in 1931 under Pope Pius XI. The leadership of the station was given to the Jesuit order . The main broadcasting center was established on the Vatican Hill . On February 12, 1931 at 4:30 p.m. with the Pope Pius XI. spoken message "Qui arcano Dei consilio" (Latin: "Which, by God's unfathomable counsel ...") broadcast the first broadcast; until 1939 further programs were in a test stage. In 1939, the Apostolic Penitentiary stated that the indulgences of the apostolic blessing Urbi et orbi also extended to the (live) broadcast on the radio. Since 1957 there has been a transmission system with high-performance radio transmitters for short and medium wave in an extra- territorial area near Santa Maria di Galeria , north of Rome .

In 2011 Vatican Radio ended broadcasting over the strong medium wave frequency of 1530 kHz ; in December 2016 the remaining local medium wave frequencies in Rome were abandoned. On December 17, 2017, exactly after 86 years, ten months and four days of its existence, Vatican Radio went into the multimedia-oriented Internet platform Vatican News . The background to the restructuring is the curia reform initiated by Pope Francis , in the implementation of which the entire Vatican media were repositioned. With the changeover, the Vatican also wants to save personnel and costs. According to the head of the German-speaking department of Vatican News, the broadcast formats and content of Vatican Radio will continue to exist, and Hagenkord described the leap into the digital social media age as an opportunity for the Vatican's media work. 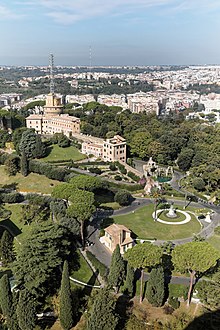 Vatican Radio, with transmitter mast, in the Vatican Gardens (2017)

For a long time, the programs were broadcast around the world mainly via medium and shortwave stations , with the program content being weighted according to the following criteria:

Vatican Radio consisted of around 40 language editorial offices and broadcast in 45 languages, including German . The language departments had around 20 minutes of broadcasting time per day, and some of the programs were then broadcast several times a day.

Daily news magazines were also produced in English, French, Italian and German, and church services and prayer programs (mostly in Latin) were broadcast.

Logo of the German-speaking editorial team

The German-language service traditionally broadcast a magazine on several shortwave frequencies in the evening at 8:20 p.m., which is repeated the next day at 12:10 a.m. and 6:20 a.m. The 15-minute news magazine “Treffpunkt Weltkirche” was broadcast at 4 pm.

Until November 2010, the German-language program was also broadcast via the medium wave frequency 1530 kHz.

Most recently, only the terrestrial VHF frequency 93.3 MHz was used in Rome. In addition, several satellites and the live stream were used for the linear radio program. The programs were also available as podcasts and audio-on-demand . Shortwave operation ended on July 1, 2012. Since then, the company has relied on re-broadcasting the service through various partner stations in Germany, Austria, German-speaking Switzerland and South Tyrol. With the establishment of Vatican News, the German editorial team was integrated into the new large editorial team.

Once a week the editors offer Latin news on their homepage .

The editorial team has been headed by Stefan von Kempis since 2019 . His predecessors were Father Eberhard von Gemmingen from 1982 to 2009 and Father Bernd Hagenkord from 2009 to 2019 .

Until the end of 2016, Vatican Radio was headed by a Director General who was bound by instructions to the State Secretariat of the Vatican. The program director, the technical director and the administrative director were subordinate to the general director. Since Vatican Radio was subordinate to the Jesuit order when it was founded, the most important director posts - with the exception of the administrative director - are occupied by clergymen of this order. Meanwhile, the Basilian Order is mainly responsible for the programming of Vatican Radio.

The General Director was traditionally appointed by the Pope, the Program and Technical Director by the Cardinal Secretary of State (each at the suggestion of the Jesuit Order).

At the end of December 31, 2016, the station lost its organizational independence and was incorporated into the Vatican's communications secretariat, which was founded in 2015 . The restructuring had been discussed controversially.

The Vatican Radio broadcasts can be received free of charge and are distributed without commercial breaks. The annual expenditure of 20 to 30 million euros is covered by the budget of the Holy See .

Vatican Radio is broadcast in the following ways:

Since 2005, Radio Vatikan has published the book series " Edition Radio Vatikan " together with the Leipzig St. Benno-Verlag . For the first time a book in this series was presented at the XX. World Youth Day presented in Cologne.

Wikinews: The Voice of the Vatican has been broadcasting for 75 years  - Message