The title of this article is ambiguous. Further meanings are listed under World (disambiguation) .

World denotes everything that is. So the term does not include individual phenomena, but a totality . This allness of the many in one, one world, can be understood as the totality of related objects and as a whole of the shared relationships.

The big whole wide world: a look into the universe ( Hubble Deep Field 1995) 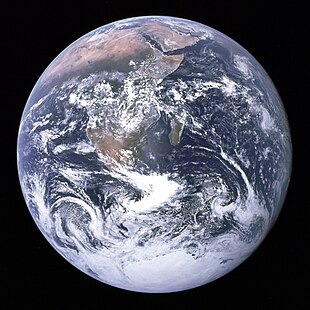 The assessment of what exactly belongs to this term depends on subjective and cultural ideas. Therefore, depending on the individual scope of knowledge and especially the respective cultural area, there are different views on what exactly is meant by the world . Many different uses of the term have emerged over time.

For example, in contrast to the comparatively precisely definable term earth in the sense of the spatially clearly defined planet, the term world is usually broader and, in its broadest interpretation, encompasses the entirety of the physical universe or the universe as well as everything that is within this universe perceive or accept as existing . For the ancient Greeks, on the other hand, the world was a cosmos , that is, in contrast to chaos, a well-ordered harmonious whole. The term world must therefore always be treated in the context of cultural, religious, scientific and philosophical views for a precise definition.

World map of the Nuremberg Chronicle (1493) - "The werlt is called a umbkrais because it is simbel rotund scheybelt or spherical."

Historically - especially before the astronomical and geographical discoveries of modern times - the term was mostly understood as the known part of the earth's surface , the sky , nature and sometimes the gods . This understanding changed in the modern age , in the course of which a stronger distinction was made between the earth as a single planet and the world as a whole universe. On the other hand, even today, when one speaks of world history , one primarily means the history of human society, although in the formulation of world history, for example in the formulation of the world spirit in Hegel , a universal dimension of the philosophical absolute resonates.

Welt ( Old High German weralt , Middle High German werlt ) is originally a purely singular word that has only been used across languages ​​in the plural worlds since the end of the 16th century . The singular was held for the universe , whereas the plural formation is possible for the globe .

The concept of the world in various disciplines 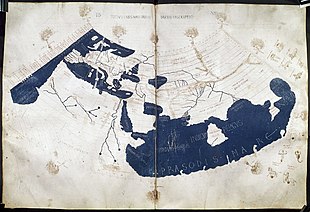 Representation of the world of geography of Ptolemy (* approx. 100)

Representation of the world of the histories of Herodotus (* approx. 484 BC)

According to today's perspective, the term “world” is usually congruent with the known universe and all of its components in relation to the scientific horizon. But the term world can also be used synonymously with earth in some contexts , for example in the case of a world map as a map of the entire earth's surface. The term worldwide usually only refers to the earth , not to the universe.

In politics , world is sometimes used to define geographical, economic and cultural boundaries. One speaks, for example, of the old world , the new world , of a world empire , a first , second , third and fourth world or also of a western and an Islamic world , but also of the entire earth, e.g. B. when talking about world politics .

There are many expressions in parlance which contain the word world in relation to human attitudes towards the totality of that which surrounds them. In most cases, a concept of the world that relates to human relationships in this way also includes the idea of ​​certain rules according to which the world functions and certain beliefs that are the foundations of world behavior and world interpretation .

The world as a social category includes, for example, concepts such as worldview and worldview , that is, the view of people on the things around them and their interpretation of them. Attributes such as cosmopolitan , worldly or unworldly relate to the world as a synonym for society and culture in which a person is considered to be more worldly, the more he is in the world, d. H. knows how to find his way in other cultures too .

The world of work or the world of politics are standing terms for the entirety of parts of society. If an individual's thoughts and actions deviate too strongly from socially recognized norms, one speaks of the fact that he or she is 'unworldly' or lives in a private world , a fantasy world or an illusory world . The life of hermits , mystics or ascetics , for example, is considered to be 'turned away from the world' .

In Christianity , the world designates the totality of human beings and natural as well as supernatural powers that oppose the will of God . In John 16.11  EU , Jesus describes Satan as the “ruler of this world”. This understanding therefore leads to a break with the world in the sense that God's will becomes decisive in all things, on the other hand to an intrinsic value of the world as a creation made by God but which has become sinful . Often the formulation worldly is used in theology , i.e. H. in the sense of the temporally earthly, secular , material , profane in contrast to the divine, sacred and eternal . As the savior of the world from sin, death and hell , Jesus Christ is the goal of the destiny of every person and of all history according to biblical teaching . All sins, especially the disobedience to God's instruction, lies, greed, idolatry , occultism of every form, misguided sexuality , belong in Christianity to the realm of the worldly, which the believer by turning to Jesus Christ, the receiving to overcome bliss given by merciless divine grace . In Christian eschatology, the apocalypse is the end of the world brought about by God during the Last Judgment and the beginning of the completed kingdom of God.

For Kant , the concept of the world has only a regulative meaning, since no intuition corresponds to it. We only ever have views of individual objects. But the world can never be given to us as a single thing, nor as a whole . Nevertheless, the term has a certain value as a guide , the idea of ​​the world remains a regulative idea of pure reason .

Friedrich Nietzsche polemicized against the claim to want to grasp the totality of the world and described it in 1874 in The benefits and disadvantages of history for life as the “ hyperbole of all hyperbolas”. Instead of the world, it is better to talk about people. In his posthumous papers there is the remark that there is only “one world and this is false, cruel, contradictory, seductive, meaningless ... Such a world is the real world. We need lies in order to win over this reality, this 'truth', that is, to live ”.

For phenomenology , the world is a horizon phenomenon . That is, it is by Karl Jaspers to human existence only in the form of extreme situations experienced and can not be described as the sum of all currently existent . Rather, the world is only the condition for us to be able to encounter individual things in it. It thus precedes any relation to the inner world. Martin Heidegger also tried to overcome the subject-object split through the concept of being-in-the-world. While modern subjectivism with Descartes brought about a breakup between subject and object and thus the epistemological question of how the worldless subject can gain access to the outside world , for Heidegger man has always been given a world. Thinking behind the phenomenon of the world cannot go back because the world is a meaningful totality. However, meaning is an emergence phenomenon that cannot be reconstructed by piecing together initially meaningless (i.e. unrelated) objects.

In order to differentiate the characters and events in series or films from the real world , the terms series universe or film universe are often used. They refer to the fact that the world as it is shown in the film or the series is not real, but can nevertheless be seen as a complete world in a sociological sense.