This article explains the German dictionary of the Brothers Grimm.

Title page of the first volume of the German dictionary 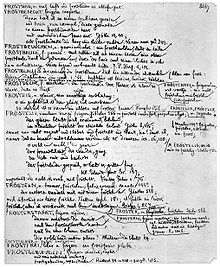 The German Dictionary ( DWB ) is the largest and most comprehensive dictionary of the German language since the 16th century with word meanings and references. It is also called Der Grimm because it was the brothers Jacob and Wilhelm Grimm who started the DWB, which appeared in 1854, in 1838. It was not ended until 1961, after 123 years. A total of 17 volumes were created. However, the revision started at the same time as the work was completed. The additional source volume appeared in 1971.

The publication of the German Dictionary (DWB) was an ambitious linguistic project of the philologist brother couple Jacob (1785–1863) and Wilhelm Grimm (1786–1859). As a reference dictionary, it should explain the origin and usage of every German word in great detail.

With the help of the DWB, all members of the German linguistic community should be able to make sure of their language, which was also a national concern at a time when there were still many small German states and no politically unified Germany. The older, as it was then present, German word usage should be documented at all stylistic levels.

“The dictionary is not a code of morals, but a scientific company that does justice to all purposes. even in the bible there is no shortage of words that are frowned upon by high society. whoever takes an annoyance at the naked figureheads or at the nothing omitted wax preparations of the anatomy, also in this salutation pass the disagreeable words and look at the vast majority of the others. "

The brothers had underestimated the daunting task that lay ahead; the work was originally estimated at six to seven volumes and up to 10 years of work. They started work in 1838. More than 80 employees procured over 600,000 documents. The first volume appeared in 1854, but they could only edit a small part during their lifetime: Wilhelm Grimm, who wrote the contributions to the letter D, died in 1859; Jacob, who was able to complete the letters A, B, C and E, died on September 20, 1863 while editing the article "Fruit".

At the end of 2005, personal copies - a total of nine volumes - of the DWB (including seven volumes of Jacob Grimm's personal copies) with marginalia in the so-called Berlinka , an earlier part of the Prussian State Library , which is now in the Biblioteka Jagiellońska (the library of the Kraków Jagiellonian University ) is located. The material noted in these volumes (based on the first delivery booklet of the ¹DWB with 2805 entries from A to Allverein ) includes 330 references and key words, of which about 130 prove to be important and are already part of the revision (²DWB, see below).

Subsequent generations of linguists continued the work. At the beginning of the 20th century, the Prussian Academy of Sciences took over the further development of the dictionary. A central collection point was set up in Göttingen to systematize the evidence. In 1930 a permanent job was created at the Berlin Academy . On January 10, 1961, the German studies professor Bernhard Beckmann in East Berlin gave the imprimatur for the final volume, as he telegraphed his West German colleague Theodor Kochs in Göttingen. 123 years after the start of work, the 380th delivery of the 32nd and last volume of this dictionary was published in January 1961 (total volume: 67,744 text columns, approx. 320,000 keywords, total weight 84 kg). The original edition is only a few hundred copies. The 33rd volume is a source volume published in 1971.

A reprint of the bound edition has been published by the Brothers Grimm's "Haus-Verlag", S. Hirzel Verlag . The first edition of the complete works was also published there between May 1, 1852 and 1971. It consists of 33 volumes with 34,824 pages.

In 1957 it was decided to revise this enormous dictionary in order to bring the oldest part, the letters A – F, up to date. A German-German cooperation was planned: In East Berlin the letters A – C, in Göttingen D – F were to be reworked. The first delivery appeared in 1965. In 2006, work on D – F was completed in Göttingen. The Berlin share is more extensive than that in Göttingen. In addition, the progress of the work in the GDR was massively hindered for political reasons, because the DWB was viewed as a project of a “bourgeois” lexicography; in the course of the 1960s, most of the employees were removed and brought in for other tasks. The remaining Berlin route was redistributed between the two workplaces in 2006. The revision was completed in 2016. After 178 years of continuous processing, work on the German dictionary by Jacob Grimm and Wilhelm Grimm ends . The new edition was also published by S. Hirzel Verlag.

The Berlin-Brandenburg Academy of Sciences excludes the later revision of the letters G to Z. The Berlin office completed its work in 2012. According to the Academy's director of science, Wolf-Hagen Krauth, the reason for the decision to discontinue the work is a lack of willingness to finance.

The competence center for electronic cataloging and publication processes in the humanities at the University of Trier , under the direction of Germanist Kurt Gärtner and funded by the DFG , digitized the entire 300 million printed characters using the double entry method: In China, the entire body of text was manually twice entered in order to reduce errors through redundancy; scanning was due to the font size of a 7-  point not or 6 point for the quotes possible. A CD-ROM version of this digitization for the Windows , OS X and Linux operating systems was published in July 2004 by Verlag Zweiausendeins . Spelling errors in the original have been corrected in this version. The University of Trier provides an online version.

What is striking about the German dictionary is that the lower case, which is unusual in the written German language, is used consistently not only in nouns but also in the beginnings of sentences. Only the beginning of a paragraph and proper names are capitalized. Jacob Grimm himself spoke out against capitalization, which was customary in the German language at the time, but had not yet been fully established (in Grimm's assessment).