The Jagiellonian University in Krakow (also Jagellonen University ; Polish Uniwersytet Jagielloński (UJ) , Latin Universitas Jagellonica Cracoviensis ) was founded in 1364 by the Polish King Casimir the Great as a Studium Generale . In 1817 it was renamed to its current name. It is the oldest Polish and after the Charles University 's second oldest university in central Europe . Her most famous students include the astronomer Nicolaus Copernicus and Pope John Paul II.

In 2018, Times Higher Education placed the university in the 601-800 group worldwide.

After the approval of Pope Urban V , the University of King Casimir the Great was first established in 1364 as the second university in Central Europe after Charles University in Prague, through the introduction of the Studium Generale . After the king's death, the development stagnated; it was not accelerated again until around 1400, also through the construction of the later Collegium Maius . The university took on a secular character, which was unusual for that time, with the faculties of philosophy, theology, law and medicine.

Establishment of science in the 15th century, Reformation 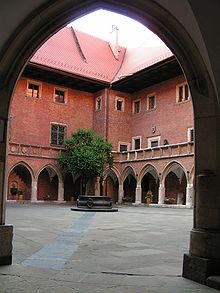 As early as 1409, university professor Johann Ysner had set up a home for poor students. He also bought a house from Johann Statschreiber , which stood next to Andreas Brenner's house.

With the restart of the university, sciences were established under the direction of professors from Bohemia and Germany. There were Johann von Schelling of Glogau , Thomas Murner , Rudolf Agricola (poet) , Konrad Celtes , Benedict Hesse , Johann von Sommerfeld , Georg Schmed , Laurenz Rabe (Corvinus), Bartholomew Stein , Bernhard Feyge , Michael Sternberg , Georg incense , Valentin Eck , Sebastian Steinhofer and many others in the 15th and first half of the 16th century. Students from other European countries, such as Leonard Cox , also came to study at the famous university. One of the most famous students was the future astronomer Nicolaus Copernicus , who studied mathematics and astronomy here without a degree in the mid-1490s. Professors Albert Blar from Masovia and Stanislaus Selig , from Krakow taught these subjects. Johann Bär also came from Cracow. At the same time as the German professors in the Carpathian countries came the traveling book printers, some of whom were firmly established in Cracow and, like Kaspar Straube , later Johann Haller , Schweipolt Fiol and Hieronymus Vietor , began printing in Poland. During the Reformation , many left Krakow due to strict anti-Reformation decrees ( Counter-Reformation ). The university lost its popularity and the record number of 3215 students before 1510 could only be reached again centuries later.

At the end of the 18th century, when the university had lost its reputation with the collapse of the state, Hugo Kołłątaj (1750–1812), priest and rector of the university, helped this institution to gain new academic significance and recognition through extensive reforms. He replaced Latin as the language of instruction with Polish. The university established modern clinics and laboratories and a modern astronomical observatory was established. A large botanical garden was laid out during the same period .

At the end of the 18th century, the Polish kingdom disintegrated and Austrian troops moved in. In 1817, the by having Congress of Vienna proclaimed free city of Krakow , the Krakow University of Jagiellonian University ( Jagiellonian renamed), according to from Lithuania originating Jagiellonian .

As a result of the Cracow uprising of 1846 Cracow became a complete part of the Habsburg Monarchy . From the "Germanization" started by Austria in 1853 to the re-admission of the Polish language at the university in 1861, the teaching language German was mandatory. Considerations to close the university because of the political actions were ended by an imperial decree. Investments were made in new buildings (Collegium Novum, 1887) and research and teaching was carried out in German and Polish until 1918.

In the Kingdom of Galicia and Lodomeria (1861-1918) the rector of the university had a virile vote in the Galician state parliament . The first was Joseph Dietl .

The Jagiellonian Library located in the Collegium Maius was comprehensively inventoried in the 19th century.

The German-speaking tradition of the university ended with the establishment of the Second Polish Republic . In the medicine had Joseph Dietl already in the 1850s Polish language introduced.

Helena Willman-Grabowska (since 1928) and Jadwiga Wołoszyńska (since 1932) were the first and only female professors in the history of the university until 1945.

After the attack on Poland , the Gestapo began arresting Polish professors and many university employees in November 1939, who were deported to concentration camps in order to wipe out the Polish elites. A number of 183 abducted people as part of the Krakow special is given in the literature. The university's holdings were confiscated and teaching was prohibited. Regardless of this, training continued underground with around 800 listeners. From 1940 the library was housed in a building newly constructed in 1931 on Mickiewicz-Allee.

Evidence of this long history of the university can be seen in the museum of the Collegium Maius , the oldest preserved building of the Kraków Jagiellonian University. The Gothic arcaded courtyard, the steep roofs and the small details (like the faces of the rain gutters) are fine examples of 14th century architecture. The south-western part of the old town is strongly influenced by the university. The college and administration building are close together. The Collegium Novum, which today serves as the main building of the university, is an important neo-Gothic building.

The Jagiellonian University in Kraków is the second largest in Poland with around 40,000 students. Since the 2005/2006 academic year, the new auditorium has been used to the maximum for both lectures and international congresses. The ultra-modern prestige building was partly financed with support from the European Union.

The 600 year old campus (also called the 3rd campus) was supposed to be completed by 2010 . It is located four kilometers south of the city center. The proximity to the Kraków Technology Park was deliberately chosen in order to establish an infrastructure for research in the field of future technologies. Some institutes have been located on the new campus since 2004.

In addition to the numerous new buildings, the Jagiellonian University is increasingly offering bachelor's and master's degrees in English to attract more foreign students. In contrast to the Polish-language courses, these are usually chargeable.

Jagiellonian University is a member of the Coimbra Group , founded in 1985 , a network of leading European universities with a long tradition.

Since 1996 the university has published the monthly magazine Alma Mater , which provides information in Polish on the history and current developments of the university.

Since October 4, 2010, the university has been a shareholder in FAIR GmbH, Facility for Antiproton and Ion Research, an international accelerator facility for research with antiprotons and ions that is being built in Darmstadt .

The Summer Academy of the School of Polish Language and Culture (Polish Szkoła Języka i Kultury Polskiej ) is an independent unit in the center of Polish language and culture in the world, at the Faculty of Polish Studies of the Jagiellonian University.

The academy, founded in 1969, organizes 3-, 4- and 6-week courses in the Polish language and culture every year. In the summer of 2005, almost 600 people took part, two thirds of the participants came from the USA , many of them with a Polish family background. The second largest group was made up of Germans with 86.

In addition to an intensive introduction to the Polish language, the summer academy is characterized by a comprehensive cultural offer. This includes visits to museums and theaters as well as excursions to the Kraków area, the Wieliczka salt mine and the former Auschwitz concentration camp .

In 2000 the Summer Academy received an award from the Polish Foreign Office for its contribution to promoting Polish culture abroad.

Part of the 3rd campus of the UJ 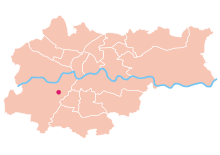 3. Campus of the UJ within Krakow

Today the university is divided into 15 faculties:

Statue of Nicolaus Copernicus in front of the Jagiellonian University