The university opened on October 9, 1978. Its prehistory can be traced back to 1622, when a college for the training of secular and religious clergy was attached to the grammar school founded by Prince Leopold V in 1612 . 1833 was a state lyceum established that in a 1923 philosophical-theological college was converted. With effect from August 1, 1978, the law to incorporate the philosophical-theological college in Passau as the Catholic-theological faculty in the University of Passau came into force. University operations began in the 1978/79 winter semester. 152 years after the University of Landshut was relocated to Munich, there was again a university in Lower Bavaria.

Structure of the university

The university is divided into four faculties :

Faculty of Computer Science and Mathematics

The university in Passau is one of the smaller German universities; on March 28, 2018, 12,117 students were enrolled.

In the 2018 summer semester, the students and professorships were divided as follows:

Profile elements of the University of Passau are internationality, interdisciplinarity and practical orientation. This is shown above all by the international focus in many courses of study, the subject-specific foreign language training in law and economics, the cultural studies focus as well as the major fields of study at the intersection of computer science, economics and law (Internet Computing), from which the Institute for IT Security and Security Law emerges originated.

At the law faculty, the study of law can be studied for state examination. The university's own repertoire enjoys a very good reputation. For foreign lawyers, there is the Master's in German Law for Foreign Students ( LL.M. ). In addition, a master’s degree in European law (LL.M.) can be completed.

The Faculty of Business and Economics offers two bachelor's degree programs leading to a B.Sc. offered, Business Administration and Economics (BWL / VWL) and Information Systems (Business Computing) . Since 2008, it has been possible to complete the master’s courses in Business Administration ( M.Sc. ) and International Economics and Business ( MA ). In the winter of 2012, the postgraduate degrees were expanded to include the master's degree in business informatics (M.Sc.).

The Faculty of Computer Science and Mathematics offers the degree courses Computer Science , Internet Computing , Mathematics and Mobile and Embedded Systems (MES) as Bachelor of Science . There is also the master’s degree in computer science, which leads to the academic degree Master of Science . The faculty regularly achieved outstanding results in university rankings - most recently in the 2009 CHE ranking.

The Philosophical Faculty offers teaching positions at primary, secondary and secondary schools as well as grammar schools and several Bachelor of Arts courses. The International Cultural and Business Studies and European Studies courses are mainly oriented towards a specific cultural area with social sciences and economics in various forms. Since the summer semester 2010, the University of Passau has been offering an eight-semester Bachelor's degree in European Studies Major, which includes a one-year study abroad. This course is funded by the DAAD as part of the Bachelor Plus program. Furthermore, can the media and communication studies , language and text sciences, political science and historical cultural sciences are studied. The University of Passau is a member of the MedienCampus Bayern , the umbrella organization for media education and training in Bavaria. The Philosophical Faculty also offers the model course for acquiring educational requirements for teaching at secondary schools, which concludes with a Bachelor of Education . Several Master of Arts courses can be completed: European Studies, International Cultural and Business Studies (various double degrees possible), History , Governance and Public Policy, Media and Communication, Geography : Culture , Environment and Tourism , North and Latin American Studies (MANoLAS), Text and Cultural Semiotics, Caritas Science and Russian and East Central European Studies . The master’s degree in Southeast Asian Studies is offered entirely in English. The model course of studies in school education and upbringing processes concludes with the academic degree Master of Education . 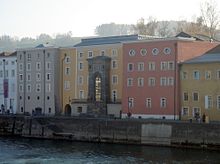 Bräugasse student residence with a view of the Danube

In the course of the reconstruction of the Bavarian university landscape, this university has also been rededicated. In addition, the Free State of Bavaria and the Vatican have agreed to declare the Catholic Theological Faculty to be "dormant" for 15 years. The religious teacher training should, however, continue to be carried out at the current level. Several chairs, especially in the Faculty of Philosophy, are to serve a different subject in the future, including the Chair of Archeology in the Roman Provinces and the Chair of Philosophy. As a replacement for the latter, the chair for philosophy will be transferred from the Catholic Theological Faculty to the Philosophical Faculty. A professorship for secondary school pedagogy and didactics , which is unique in Germany , has already been filled. There was also a chair for communication science, two junior professorships (European politics and English studies ) and a chair for intercultural communication. 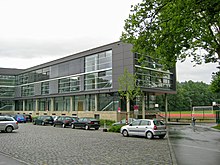 The university is located in the form of a closed campus on the Inn , with several other buildings (e.g. that of the former theological faculty) in the city center. In 2009 the Passau campus received the award “Germany's most beautiful campus” from UNICUM magazine. At the beginning, the university was only located in the south and west wings of the former Augustinian canons of St. Nikola . The monastery was built in 1070 under Bishop Altmann von Passau and also houses the mother house of the Teutonic Sisters and a kindergarten .

The campus buildings were built gradually after the university was founded. On April 6, 2006, the IT Center and International House was opened, which was financed with funds from the high-tech offensive of the Free State of Bavaria. a. houses the computer science research campus. It houses the university institutes IFIS (Institute for Information Systems and Software Technology), FORWISS (Institute for Software Systems in Technical Applications in Computer Science) and ISL (Institute for IT Security and Security Law). The most recent opening of the new center for media and communication took place on May 14, 2014, which, among other things, accommodates the state-of-the-art communication technology for studying communication sciences. 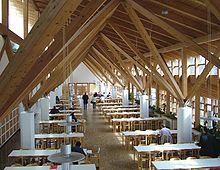 The Studentenwerk Niederbayern / Oberpfalz operates four dormitories outside the campus (Bräugasse, Donau-Schwaben-Straße, Leonhard-Paminger-Straße and Maierhofstraße) as well as a canteen and four cafeterias on campus.

The university library with its branch libraries of the legal, economic, philosophical and theological faculties as well as the faculties of computer science and mathematics has a stock of approx. 2 million volumes. In addition, the university has a sports center, u. a. with a 400 m plastic running track, a beach volleyball court, a golf practice area, a climbing rock, a cardio and fitness studio as well as a rowing and canoeing facility.

On November 17, 2009, as part of the nationwide student protests, as in other cities, the Audimax was occupied by students.

After a vote among all students in July 2012, a semester ticket was introduced in Passau for the 2013 summer semester . This includes all city ​​bus routes in Passau and costs 20 euros per semester. For the 2020 summer semester, the amount will increase to € 22.50.

37% of the students (as of October 15, 2008) went to a partner university for at least one semester; thus the university took first place in Germany. In the years that followed, this number continued to rise as international relations expanded. Many international students also come to Passau. In October 2015, 985 students had a foreign passport.

A list of well-known graduates with their own Wikipedia entry can be found in the category: Graduate of the University of Passau .

Rectors and Presidents of the University of Passau