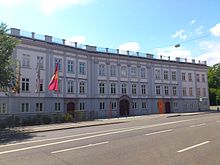 Campus am Roten Tor: K-Bau (seat of the university management) 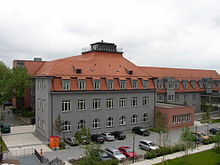 Campus am Brunnenlech: A building (view from the H building)

Temporal overview of the previous institutions

The beginnings of the university can be traced back to the year 1670. At that time, Joachim von Sandrart founded a private art academy in Augsburg . After the academy in Nuremberg founded by Jacob von Sandrart in 1662, this is one of the oldest art academies in German-speaking countries. In 1684, the academy was recognized by the Protestant part of the Augsburg city council, which had equal representation. From this point on, people spoke of the "Protestant Academy". In 1710 the "Imperial City Art Academy" was founded, making the facility accessible to all citizens. The Reichsstädtische Kunstakademie was headed from the beginning by two equal directors. The Catholic directors included artists such as Johann Rieger (1710 to 1730), Johann Georg Bergmüller (1730 to 1762), Matthäus Günther (1762 to 1784) and Johann Josef Anton Huber (from 1784). Protestant directors were, for example, Georg Philipp Rugendas (1710 to 1742), Gottfried Eichler the Elder (1742 to 1759), Johann Elias Ridinger (1759 to 1767), Johannes Esaias Nilson (1769 to 1786) and Johann Elias Haid (1786 to 1808).

Two years later, in 1712, the city council assigned her a “permanent local” in the upper floor of the so-called “ Stadtmetzg ”, a building by Elias Holl . In 1779, the entire range of courses was reformed and a “private society for encouraging the arts” (a kind of sponsorship association ) was founded under city caretaker Paul von Stetten .

After Augsburg lost its status as a free imperial city in 1808, the existence of the imperial city art academy also ended. The facility served as a feeder for the Munich Academy until 1814, and from 1814 was called the “Royal Art School”. This went on to the higher art school founded in 1820. In 1835 it was incorporated into the "Royal Polytechnic School" founded on November 11, 1833. This was initially in the Fugger houses and from 1834 in the former Katharinenkloster . The most famous student was the later "painter prince" Franz von Lenbach . The year 1864 brought the dissolution of this school after 29 years, only one mechanical engineering school remained. From 1870 to 1907 it was called the “Royal Industrial School”, which was also attended by Rudolf Diesel , the later engineer and inventor. There were interim solutions in the technical faculties until 1924.

Art classes were reorganized in 1877 under the name “Städtische Höhere Kunstschule”. In 1905 the art school relocated to the newly built rooms on the top floor of the Hall School on Maximilianstrasse . It remained there, apart from relocations due to the war and destruction, changed several times until 1984. In 1921 this institution was affiliated to the technical college of the city of Augsburg, but retained its own life until it was destroyed in an air raid in 1944.

The building trade school was launched in 1893.

In 1905, at the suggestion of the "Augsburger Gewerbehalle" (an association of Augsburg traders), the "Augsburger Handwerkerschule" was founded. The former state stud on Baumgartnerstrasse was converted for this purpose. A year later, the Augsburg Web School was attached to this school. Due to a lack of space, extensive renovations and new buildings were necessary in 1910. Just two years later, a spinning department was added and a technical college for mechanical engineering and electrical engineering was established as a successor to the industrial school that was dissolved by royal decree in 1907 (inventory and premises were then used by the newly built royal district high school , today's Holbein-Gymnasium ). Later, in September of the same year, all technical schools and specialist courses on Baumgartnerstrasse were combined to form a single facility under the name of “Commercial Technical Schools of the City of Augsburg”. Under this name, the so-called “A-Bau” was moved into in 1913 and the so-called “F-Bau” a year later.

From 1924 to 1932, the “ Higher Technical College of the City of Augsburg” with the mechanical engineering and electrical engineering departments was affiliated to the commercial college . There was also a municipal construction school with a five-semester training period. Both schools were merged in 1932 under the name Höhere Technische Lehranstalt, to which the technical colleges including the municipal higher art school were still attached.

After the Second World War , teaching was resumed in January 1946. The technical and artistic facilities were henceforth independent again and reopened under the names of the “Bau- und Ingenieurschule” and “Kunstschule” of the city of Augsburg. In 1951 the building and engineering school was renamed again to "Rudolf Diesel Building and Engineering School of the City of Augsburg, Academy for Applied Technology". The duration of the course was increased from 5 to 6 semesters in 1953 and at the same time the electrical engineering course was set up with the fields of power engineering and communications engineering .

On October 1, 1958, the "Building and Engineering School" was given the name "Rudolf Diesel Polytechnic of the City of Augsburg, Academy for Applied Technology" after a corresponding expansion.

In the 1950s and 1960s, the A-building was supplemented by the B-wing and the large physics room with nuclear physics laboratory, the C-building was completed and the mechanical engineering laboratory (D-building) was designed.

In July 1965, after around 60 years of existence, the technical colleges were dissolved without replacement.

Campus at the Red Gate: K and W buildings

The “art school” was named “Werkkunstschule der Stadt Augsburg, Higher Technical School for Applied Graphics and Painting” in 1961. It comprised a one-semester preliminary course based on the model of the Dessau Bauhaus and was divided into the four specialist classes of commercial graphics, sample design, shop window and exhibition design and applied painting.

Both municipal institutions were united on August 1, 1971 to form the Augsburg State University of Applied Sciences. The teaching areas of the previous schools were continued in the fields of technology and design.

Since then, the university has grown and expanded continuously: at the beginning of the 1974/75 winter semester, a new branch of training was opened with business training. Today's Faculty of Economics (at that time the business administration department) was founded in 1979 as a spin-off of the general sciences department. Another subject was added in the 1980/81 winter semester with the computer science course. In 1991 the independent department of computer science was founded (today the faculty of computer science). The Media Informatics / Multimedia course was set up in the 1996/97 winter semester as a cooperation between the Faculties of Design and Informatics. The environmental technology course in the Faculty of Mechanical Engineering started in the 1998/99 winter semester.

Campus am Brunnenlech: H-building with cafeteria, Lochbach in the foreground

In the winter semester 2005, a service center with a central library, computer center and cafeteria could be moved into with the H building, the first new building in a long time. In spring 2007, buildings K to M for the faculties of design and computer science were inaugurated on the site of the former school calico factory . The preserved historical head building was renovated in the style of a baroque castle and the two wing structures, demolished in 1996, rebuilt in modern architecture made of glass, steel and exposed concrete.

The newly created second campus on Friedberger Straße, which also includes the J-Building, which the Faculty of Computer Science moved into in 1999, was named because of its proximity to the Red Gate Campus at the Red Gate . The buildings at the Baumgartnerstrasse location were named Campus am Brunnenlech due to the Lochbach , which flows through the university campus between the H-Bau on the western bank and A and E-Bau on the eastern bank. It is also called Brunnenlech in the university area.

In 2011 the Augsburg University of Applied Sciences celebrated its 40th anniversary as a university of applied sciences.

The Faculty of Economics moved into a new building on the Red Gate campus in the 2011/12 winter semester. Before that, she spent 34 years together with the chairs of music and art education at the University of Augsburg in Lechhausen on Schillstrasse in the former college of education, where it was relocated from the main site in the 1977/78 winter semester.

The Faculty of Applied Humanities and Natural Sciences (previously General Sciences) oversees the general sciences elective subjects and the humanities and natural sciences basic subjects of the technical courses. The general science elective subjects with topics from philosophy, literature, history, politics, languages, etc. are intended to complement and expand the specialist course. It also offers the additional qualification in environmental technology and pollution control. The Augsburg University of Applied Sciences is a member of MedienCampus Bayern , the umbrella organization for media training and further education in Bavaria.

Currently (as of February 13, 2020) the following courses are offered at Augsburg University of Applied Sciences:

Two institutes at the university promote knowledge and technology transfer:

The primary goal of the Competence Centers for Structural Engineering, Mechatronics and Environmental Technology is to work on research projects and develop innovations in cooperation with the private sector.

In addition, there are two affiliated institutes : the Technologie Centrum Westbayern, based in Nördlingen, and the Institute for Construction Law and Construction Operations in Augsburg .

Campus at the red gate; Artwork on campus

The Augsburg University of Applied Sciences has two locations, which are around 500 m apart in the city ​​center .

The campus at Brunnenlech (Buildings A to H) with the faculties of humanities and natural sciences, architecture and civil engineering, electrical engineering and mechanical engineering, as well as administration, cafeteria, central library and data center is located between Brunnenlechgäßchen and Baumgartnerstraße.

On Friedberger Straße, on the site of the former school calico factory, the campus at the Roten Tor (Buildings J to M and W) with the faculties of IT, design, economics, the cafeteria, a cafeteria and the university management was built.

Together with the universities of Neu-Ulm and Kempten , the Augsburg University of Applied Sciences has been operating the Vöhlinschloss University Center in Illertissen since 2009 . The universities use the meeting and convention center for seminars, training courses, conferences and for advice on setting up a business.

Panoramic picture of the university (Brunnenlechgäßchen)