The job title is civil engineer and belongs to the professional group of engineers . Studies in civil engineering at universities and technical colleges conclude with an academic graduation as a bachelor's and further as a master's . Until the implementation of the Bologna Process (the core phase was the start of studies 2003-2006 for the 8 to 10 semester diploma courses ), university courses had the academic degree of Diplom-Ingenieur (usually abbreviated as Dipl.-Ing. Or Dipl. -Ing. Univ. In Bavaria) as well as at universities of applied sciences Graduate engineer (FH) (abbreviated as Dipl.-Ing. (FH) ) is common. As a result, most civil engineering degrees in Germany were still entitled to the academic degree of graduate engineer up to around 2008.

As part of the Bologna Process, the desired renaming of the wide-ranging occupational profile as civil engineer could not prevail , which would have corresponded to a similar reference to the professional titles in the francophone (French: genie civil ) and in English-speaking countries ( civil engineer ). 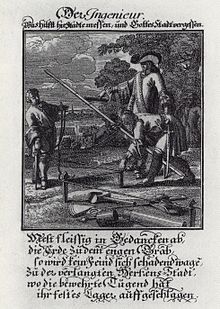 Contemporary illustration The Engineer from 1698

The word civil engineering includes the term engineer in civil engineering . The engineering designation has been known in this context since the early Middle Ages. It is derived from the Latin word ingenium and means productive spirit, intellect, witty person . This title was given in the 12th and 13th centuries to people who knew how to build and operate military equipment.

The word engineer retained this meaning for many centuries and is mentioned, for example, in Christian Wolf's mathematical lexicon from 1716. There it is said that the engineer is a. "[...] war builder, [...] a person who practices the art of war architecture or fortification and is therefore not only capable of specifying fortresses, but also knows how to order attacks during siege".

In 1735, Johann Rudolf Fäsch added in his war, engineer and soul encyclopedia : “By the way, he should also have a thorough science in arithmetic or arithmetic, geometry, geography, civil architecture, artillery, mechanics, drawing art and perspective so that he would know how to advise himself on all expiring occasions, and would not need to first recover advice from others [...] ".

Civil engineering is one of the oldest engineering sciences. The first buildings were built after the Neolithic Revolution towards the end of the Stone Age . The Assyrians , Babylonians and Persians - the early high cultures of Mesopotamia - trained engineers at palace or temple schools. Reading and writing in cuneiform was taught, as well as calculating the inclination of water pipes, excavating excavation work and the load-bearing capacity of walls. The same engineers who supervised the construction of palaces, bridges, temples, city walls or aqueducts in peacetime were entrusted with military administrative tasks during the war. Notable buildings are the Djoser pyramid by the builder Imhotep , the palace of Persepolis , as well as the seven wonders of the world . In ancient times , the Romans were known for their many bridges and roads. They also developed improved cranes with a pulley and impeller. In the early Middle Ages, the main focus was on expanding the monasteries, and later on building castles and cathedrals .

Two structures are of particular importance for civil engineering. The Florence Cathedral was almost finished at the beginning of the 15th century. The only thing missing was the dome, which seemed impracticable because of the enormous diameter of 45 meters at the time. There was no way to erect a falsework in the required dimensions. Brunelleschi found out through theoretical considerations that he can build the dome without scaffolding if it has an elliptical shape. This already showed a slow transition from the builder's experience to the theoretical knowledge of the engineers. The turning point for civil engineering was the renovation of St. Peter's Basilica in 1742. Here, for the first time, reliance was placed on the calculations of mathematicians based on the principles of mechanics, who considered the installation of additional pull rings to reinforce the dilapidated building as sufficient. The suggestion of the experienced builder to remove the entire dome was rejected.

In the 17th century, many countries were surveyed by governments to improve governance. The national survey of France was a project carried out by the Académie des Sciences and lasted over a century. In the Renaissance the new cannons spread more and more ; the castles lost their military value. Defense systems were now built flat and massive. The fortress architecture became a new discipline in which the geometry played a major role. The French fortress builder Vauban built several fortresses up to 1700 and took part in many sieges. In 1675 the Corps des ingénieurs du génie militaire was founded, which brought together the military fortress construction engineers for the first time. Between 1663 and 1681 the Canal du Languedoc was built, the largest canal construction project since ancient times. In addition, road and bridge construction in France was promoted by the state. To this end, in 1716 civil engineers were combined to form the Corps des ingénieurs des ponts et chaussées . The first schools for training new engineers were also established in the 18th century. These include the École nationale des ponts et chaussées 1747 ( School for Bridges and Roads ), the École du Génie Militaire 1748 in Mézières ( School for Military Pioneers ) and the École des Mines 1783 ( School for Mining ). In 1794 the École polytechnique was finally founded, which is also of great international importance for other engineering sciences. Here, in two years of instruction, the common mathematical and scientific basics for the subsequent study at one of the aforementioned special schools were conveyed. Following the example of Ecole Polytech, many polytechnical schools were founded in Germany at the beginning of the 19th century , which were upgraded to technical universities and finally to technical universities over the course of the century . In liberal England the construction of roads, bridges and canals was a private matter. The British civil engineers formed the Society of Civil Engineers under the leadership of the famous engineer John Smeaton in 1771 . Despite her great influence, she ultimately fell into an ongoing crisis. It was replaced by Thomas Telford in 1818 by the Institution of Civil Engineers .

Civil engineering is divided into a large number of different subject areas that encompass the technical area of ​​the entire building industry:

In all of these areas, civil engineers are largely employed and a. the planning , the dimensioning , the cost calculation , the execution management and control , the construction management controlling as well as the safety-related construction supervision of plants and structures. The level of participation varies depending on the type and function of the building.

Since the profession has a scientific focus, enthusiasm for technology, logical and analytical thinking, a high level of concentration and perseverance or patience are an advantage. Likewise, social skills and economic action are of great importance in many areas of the job description. Knowing how to use information technology is a basic requirement for successful studies in construction, as in all areas of science and technology. The study requirement is a certificate of higher education entrance qualification (depending on the type of university: general or subject-specific higher education entrance qualification or technical college entrance qualification ), the course itself can have a number clausus be limited. 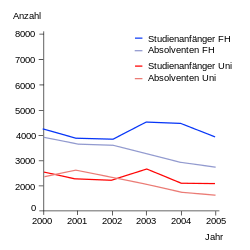 The graphic opposite shows the number of new students and graduates in civil engineering at the various types of universities in Germany. In general, a downward trend can be seen in the graph, which is associated with the strongly fluctuating economic situation in the construction sector.

Due to the standardization of the structures of higher education in Europe in the Bologna Process , most engineering courses had already been converted from the previous diploma course to the Anglo-American Bachelor and Master system by the end of 2010.

Some universities offer a "dual study" or combined study. In this case, it is possible to complete a degree in civil engineering with a bachelor's degree as well as to acquire a master craftsman's certificate, assuming a journeyman's examination in the building trade. The aim is to improve the qualifications of graduates for certain professional activities and to increase employment opportunities.

In Austria, the academic degree “Dipl.-Ing.” Is also abbreviated as “DI”. The graduate of a 5-year school education at a higher technical institute (HTL) can in Austria - on application - be awarded the professional title "Engineer specializing in construction".

The academic further qualification as " Doctor of Engineering (Dr.-Ing.)" Is possible in a doctoral procedure lasting several semesters at a university or technical college. The prerequisite for this is a university diploma or a master’s degree.

Conceptualizing, planning, calculating, constructing, organizing, but also managing are the most important job characteristics of the civil engineer. Technical solutions by civil engineers are always committed to safety (stability, operational safety, usability ) on the one hand and economic efficiency on the other. Civil engineers work in companies of all sizes in the construction industry and the building trade as well as in engineering offices of various sizes. Civil engineers are also employed in the field of public administration. They can be employees , freelancers or civil servants . Civil engineers often work closely with architects and town planners . Civil engineers have their own career test ( civil service career ) in the public service. 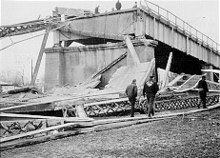 The Silver Bridge - a chain bridge over the Ohio River - completed in 1928 after it collapsed on December 15, 1967 during evening rush hour traffic

The civil engineer takes on a considerable degree of responsibility for people and the environment through his work. The structures must meet certain requirements in terms of both stability and usability. If these are not met, for example due to incorrect static calculations, disregard of recognized rules of technology or neglect of the construction supervision assigned to him, the responsible civil engineer is liable for these errors. Be the resulting defectiveness of the building - for example by a collapse caused by this - life and limb of people at risk, violates this or killed, the person responsible for threatening expertises occupied causation and negligence in criminal fines or even imprisonment .

The making of civil engineers liable for their mistakes has been handed down from antiquity . Thus, in the 1901/02 rediscovered in the Persian Susa , originally from Mesopotamia and dating back to the 18th century BC. Codex Hammurapi, dated BC, can be read in cuneiform script on a diorite column :

"If a builder builds a house for a man and doesn't make its structure strong so that it collapses and causes the builder's death, that builder should be killed."

"Anyone who violates the generally recognized rules of technology in the planning, management or execution of a building or the demolition of a building and thereby endangers the life or limb of another person is punished with imprisonment for up to five years or with a fine."