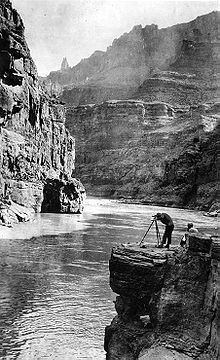 The land survey as part of the field of Geodesy is concerned with the basic surveying of a state or country. Thematically, it is more comprehensive than land surveying or cadastral surveying , in which parcel boundaries are measured. The national survey results from the legally anchored obligations of local authorities .

Depending on the position within an administrative division, local authorities

Since the 1980s, the task has been to provide the basic data of the national survey on an object basis in a geographic information system. In this way, modern requirements regarding the timeliness of data and databases are better met. Depending on the legal regulation, one or more of these tasks can be given. Details regulate geodata infrastructure laws (GDIG), as well as geographic information and surveying laws (GeoVermG).

Importance of country and geographic information

Geospatial information is economically and militarily important. B. as early as 1894 in Otto Lueger's lexicon of all technology and its auxiliary sciences , was formulated:

"In every cultural state is for political, military, technical and scientific purposes, such as securing property, statistics, property tax collection, military exercises, national defense, agriculture and forestry, mining, industry, traffic, road, rail, electricity and sewer construction , scientific investigations (geology, geophysics) etc. the acquisition of an exact national survey is necessary. In accordance with the stated purposes, the same should be designed in such a way that, as far as this is technically possible, it is able to directly deliver all geodetic documents required in the public interest and special measurements are not necessary or at least restricted as far as possible. The results of a land survey intended for public use are reliable maps. "

In the 18th to 20th centuries, the military engineer geographers (engineer officers ) initially had the most important part in the creation of maps , but this later increasingly passed on to civil-official geodesists , cartographers and topographers . Since the 20th century, private sector initiatives ( map publishers , transport, spatial planning, GIS services, etc.) have also been significantly involved in map and data services.

Topographic maps, especially in the 1: 25,000 and 1: 50,000 scales, are available in bookshops. They are the basis for further maps from publishers or geosciences institutions .

The data from the survey are available to surveyors (authorities, ÖbVI , civil engineers ) - as a database or point maps of the surveying network. Such networks have been measured terrestrially since Gauss , and today also with GPS. As a network of the first to fifth order, the fixed points have distances of 30–50 km down to about 500 m.

In Germany, land surveying belongs to the legislative competence of the federal states and is carried out by the land surveying authorities ( state survey office ). In other countries, a national authority is usually responsible - in Austria the Federal Office for Metrology and Surveying , in Switzerland Swisstopo (see also Official Surveying (Switzerland) ).

High-resolution vertical photographs of the earth's surface ( aerial photographs ) are created by the state surveying authorities, used for cartographic tasks and distributed. They serve u. a. as a basis for planning (e.g. in road construction and in agriculture and forestry), to identify contaminated sites, to document time as a time series or to determine terrain forms and heights via stereoscopic evaluation.

In addition to the official map data of the federal states, the OpenStreetMap project has existed since mid-2004 as a further, collaborative form of collecting geographic data. Volunteers donate the vector data derived from aerial photographs or self-created GPS tracks to an internationally organized project. In many urban regions, this resulted in a more detailed map image than the TK 1: 25,000 of the federal states. In contrast, things often look bad in rural areas, where the number of helpers is lower. As a result of the Open Data initiative, there has recently been a certain form of cooperation with the state authorities in some regions. When creating free topographic maps, elevation data from NASA are usually used .