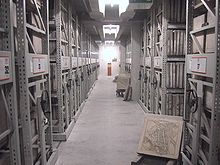 Archive with lithographic plates in the State Office for Digitization, Broadband and Surveying Bavaria in Munich

State Surveying Office ( LVermA ) is the uniform name for a state authority up to the end of the 1990s that is responsible for the public tasks of the official land surveying , in particular the state survey and the real estate cadastre , in a federal state of the Federal Republic of Germany . With the emergence of new digital media and as a result of a changed understanding of tasks, but also partly due to the transition from the status of authorities to the organizational form of state operation , the states have introduced new names for the institution, e.g. B. "Land surveying and basic geographic information" or "Geographic information and surveying" with an addition indicating the organizational form.

Land surveying offices have been restructured several times in recent years as part of administrative reforms. The State Surveying Office Mecklenburg-Western Pomerania has been integrated into the State Office for Internal Administration of Mecklenburg-Western Pomerania as the “Office for Geoinformation, Surveying and Cadastre”. North Rhine-Westphalia has dissolved its land surveying office and integrated into the Cologne district government on January 1, 2008 as a department called "Geobasis NRW".

Because no other regulation was made in the Basic Law for the Federal Republic of Germany , the federal states have the legislative competence for official surveying. This essentially comprises the land survey and the real estate cadastre . The institutions responsible for this ensure the geodetic spatial reference through the management of position, height and gravity fixed point fields and the operation of a satellite-based positioning service ( SAPOS ), they record the landscape on the earth's surface using terrestrial and remote sensing methods, they document the results in topographical information systems ( ATKIS ) and represent them in topographic maps. The results of the national survey, which are kept up-to-date, are available for applications in business and industry, in public administration and in science, but also for use by private users.

Large-scale land surveying tasks for Berlin , Bremen and Hamburg are carried out in cooperation with the neighboring states of Brandenburg , Lower Saxony and Schleswig-Holstein .

The federal states have agreed with the federal government through administrative agreements that topographic maps and ATKIS data on a scale of 1: 200,000 and on a smaller scale will be processed by the Federal Agency for Cartography and Geodesy (BKG; former name: Institute for Applied Geodesy (IfAG)).

With the aim of coordinating the work of the federal states in the field of land surveying and the real estate cadastre and keeping maps and data as uniform as possible, the responsible supreme state authorities have voluntarily come together to form the working group of the surveying administrations of the federal states of the Federal Republic of Germany (AdV).

In most European countries, the tasks of land surveying are performed uniformly for the entire national territory by a central authority.

State surveying offices or state companies in the Federal Republic of Germany: