Authority (also called office in the organizational sense) is a public body that performs the tasks of public administration that are assigned to it on the basis of material laws. Authorities can give up doing , toleration or omission ( intervention management ) or offer services ( service management ) and are the organ of the respective body for which it is established. They exist at the supranational , national and subnational levels. Going further is the term of the public institution and the agency which, as a state agency, also performs tasks that go beyond public administration (e.g. military agency, courts ).

According to Section 1 (4) VwVfG, an authority is “any body that performs public administration tasks”. These include besides the classical management carriers and organs of the legislative and judicial branches , provided that they take administrative decisions (eg. As the President of the Bundestag for the reimbursement of election expenses or the president of a court in issuing a ban from the house ). In addition, entrusted persons (e.g. the TÜV experts or the district chimney sweeps ) are also considered to be authorities, as sovereign rights have been transferred to them by law.

Appear to the citizen

In Germany, authorities appear to citizens in their own name, even though their administrators act through them. It is no longer the rule everywhere today that they wear the emblem of their administrative holder, such as a federal coat of arms . The Federal Employment Agency and the German Federal Pension Insurance Association, for example, use their own company logos .

In both private and public law , authorities or companies that take on certain supply tasks act on behalf of administrative policy.

If parts of an authority are listed as public company, this is done in a so-called self-propelled . In the case of privatization , a private company form is adopted. The legislature regulates the form in which civil servants can be used in a privately organized society. A limit for privatizations in Germany is provided by the functional reservation of Article 33.4 of the Basic Law, which provides that the exercise of sovereign powers is generally to be delegated to members of the public service . In this context, the concept of services of general interest is used as a task of the public service in the political discussion. 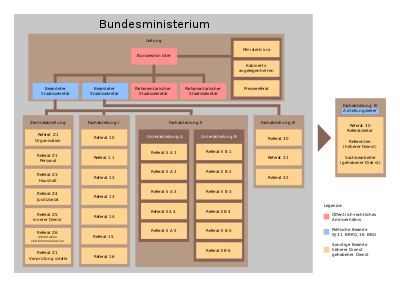 Clarification of the authority structure using the example of a (fictitious) federal ministry.

In general, the competencies and responsibilities as well as the essential work processes are clearly and comprehensibly defined by law , ordinance , decree , statute , rules of procedure or otherwise. As far as they interfere with the rights of citizens, decisions by authorities are generally subject to a legal review within the framework of administrative jurisdiction ; in addition, the work of the authorities is controlled by the technical supervisory authority or the municipal supervision by higher-level authorities.

The disclosure of internal processes, on the other hand, is typically not enforceable, but is subject to official supervision ; Such processes can be brought to the attention of the supervisory authority with a complaint . Internal processes can lead to legal action, for example, if administrative regulations and / or established administrative practice lead to a self-commitment by the administration ; a deviation from this can violate the general principle of equality from Art. 3 Para. 1 GG and is then illegal for this reason.

The main organizational units of the federal and state authorities are the departments of the highest and highest authorities , which are otherwise called departments . These can be divided into subject areas or teams. You will be led by a department or team leader. Several departments are combined into a group, a department group or in ministries to a sub-department. Several groups, unit groups or sub-departments form a department . Major departments with many subdivisions are also called main departments, e.g. B. the former Armaments Department in the Federal Ministry of Defense . The (main) department is the highest form of structure below the management level of an authority. This consists of the head of the authority, his deputies and staff units. In federal authorities, the heads of the authorities are often called the president and the deputy vice-president. In federal ministries , the federal ministers , parliamentary and civil servants state secretaries belong to the management level .

The federal and state authorities implement the laws of the federal government or their state. The administration can take place in the own name or on behalf of the federal government, depending on administrative competence . Since the states are supposed to form the basic elements in the federal system of the Federal Republic of Germany , they act independently within the framework of their state administration under the supervision of their government (which in turn is accountable to the respective parliament ) and under review by the courts . A cooperation between the ministries of countries, including in the framework of the conferences of the Prime Minister and ministers , particularly the Prime Ministers' Conference , held.

Administrative processes generally have very strict names. For example, there are the following fixed designations:

Example: After a break-in in a tax office, the police station chief writes a report to the police chief, he sends a letter to the tax office and an order is sent to his subordinate police officers.

“He thinks there are no more authorities? As if it could even go without an authority! Everyone would like to attack others! "