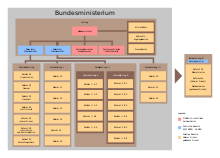 Ministries have become more and more differentiated throughout history. Historically, this becomes clear z. B. at the Prussian institution of the State Ministry , which comprised the entire government. The classic departments arose in the 19th century: finance, foreign affairs, war, home affairs and justice.

The North German Confederation or the German Empire did not use the term ministry . The Federal Chancellor had become the (only) responsible Federal Minister through Lex Bennigsen in 1867. The Federal Chancellery was initially the only supreme federal authority until the Prussian Foreign Ministry became the Foreign Office of the North German Confederation in 1870. The Prussian Foreign Ministry, founded in 1870, had already been renamed as the Foreign Office of the North German Confederation when it was taken over and continued to exist as such in the German Empire. The highest imperial authorities in the Empire from 1871 were called Reichsämter . Their bosses, the State Secretaries , took instructions from the Chancellor, so they were not ministerial colleagues. Only with the Weimar Republic were fully-fledged Reich ministries introduced. The Reich Justice Office (1877) established after the establishment of the Reich was not called the Ministry. This was based on the fact that the Reich Chancellery (at the beginning of the Empire under the leadership of Bismarck ) had the entire authority of the Reich, and it was not until later that a differentiation took place at the Reich level. In order not to allow the Reich government to assume responsibility vis-à-vis parliament, there were formally no ministers or ministries and therefore no collegial Reich government, although the state secretaries, as heads of the Reich offices, actually had a very similar position to the ministers.

Only at the Foreign Office (AA) are the following regular official names replaced by independent ones:

Employees within the meaning of the collective agreement for the public service (collective agreement for the public service) are not civil servants and thus do not have an employment relationship under civil service law, but rather a private law employment relationship. Employees do not have official titles , but are referred to as collective bargaining employees and do not receive a salary , but remuneration according to TVöD (salary groups E 1 to E 15, comparable with the salary groups of civil servants). The occupations that collective bargaining employees usually hold include: B. Administrative clerk , specialist for office communication and clerk for office management .

Official state secretaries and ministerial directors are so-called political officials ; According to Section 23 BeamtStG , Section 36 (1) No. 1 of the Federal Civil Service Act (BBG), they can be put into temporary retirement at any time. Parliamentary state secretaries can be dismissed at any time in accordance with § 4 sentence 1, 1st HS ParlStG .

There are also other offices with special status, e.g. B. in connection with a function as a supervisory authority. For example, the Federal Commissioner for Data Protection and Freedom of Information has a public-law office relationship with the federal government ( Section 12 (1) BDSG) and was part of the Federal Ministry of the Interior's division until 2016 and was subject to its supervision ( Section 22 (5) p. 1 and 2 BDSG ). In parallel to the administrative-organizational position of his authority as an outsourced department, the BfD, as head of this authority, received official salaries in the amount of the salary due to a federal civil servant in grade B 9 ( Section 23 (7) sentence 1 BDSG).

In the Foreign Office, service and office names that differ from those shown above are sometimes used. For example, the government council z. A. (job title) called Legation Secretary. In addition, an official of the Foreign Office who is deployed abroad, in accordance with international customs and agreements, sometimes also has a title or other official title, which is based on the activity at the diplomatic mission and international customs: Consul, Counselor; Embassy secretary; Chancellor

In addition to civil servants and employees, external employees have been working in German federal ministries for several years . These are not classic freelance workers who are financed by the ministries, but people from the private sector, associations and interest groups who continue to be employees of their actual employer and are paid by them. This is partly done as part of a staff exchange program that has been established since 2004, partly in the form of secondments, which are referred to in publications by the Federal Government as “external employees”, “posting” and “seconding”. Observers see this as a new dimension of lobbying right up to the “haze of corruption” ( Hans Herbert von Arnim ).