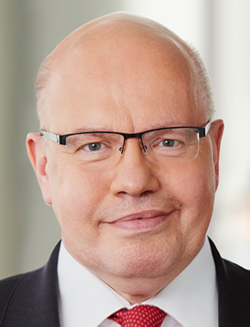 Peter Altmaier (born June 18, 1958 in Ensdorf, Saar ) is a German politician ( CDU ) and since March 14, 2018 Federal Minister for Economic Affairs and Energy in the Merkel IV cabinet .

Before that - since December 17, 2013 - he was Federal Minister for Special Tasks and Head of the Federal Chancellery in the Merkel III cabinet . In addition, since October 24, 2017 he has been Federal Minister of Finance on an interim basis - after Wolfgang Schäuble was elected President of the Bundestag . From May 22, 2012, he succeeded Norbert Röttgen as Federal Environment Minister in the Merkel II cabinet . Before that, Altmaier was Parliamentary Managing Director of the CDU / CSU parliamentary group .

Altmaier, the son of a miner and a nurse, grew up in a Catholic-conservative middle-class family in Saarland. In 1978 Altmaier acquired the general university entrance qualification at the Gymnasium am Stadtgarten in Saarlouis . After 15 months of basic military service , Altmaier left the Bundeswehr as a corporal in 1980 . In 1980 he began studying law at Saarland University , which he completed in 1985 with the first state examination and in 1988 with the second state examination. After that he was a research assistant at the Europa-Institut at Saarland University until 1990 . He is fluent in English, French and Dutch. In 1990 Altmaier was an official in the Professional category at the European Commission in Brussels , where he served as Secretary General of the Administrative Commission was responsible for the social security of migrant workers by the 1994th

Altmaier has been on leave as an EU civil servant since November 1, 1994.

Altmaier is Catholic , single and lives alone in a 280 m² apartment in an old building in Berlin-Schöneberg . He collects antiquarian books and has an extensive private library with over 6000 book titles . Altmaier stated about his private life:

“God arranged it in such a way that I go through life alone without being married. Therefore, there cannot be anything about a relationship in the archives. I do not suffer from it, I am not depressed either, and everyone who knows me will be able to confirm that I have a sunny disposition and a childlike joy in life. "

Peter Altmaier at the 29th party conference of the CDU in Germany on December 6, 2016 in Essen

CDU member of the Bundestag (since 1994)

Altmaier has been a member of the German Bundestag since 1994 . By 2009 he moved into the Bundestag via the Saarland state list ; since the federal election in 2009 he has been a directly elected member of his home constituency Saarlouis .

In the Bundestag, Altmaier was chairman of the sub-committee of the legal committee for European law from 1998 to 2000 . He belonged to the black-green discussion group of young MPs, the so-called pizza connection . Altmaier was a member of the board of the CDU / CSU parliamentary group from 2002 to 2005 , and from 2004 to 2005 he was also its legal advisor . On October 27, 2009 he became First Parliamentary Managing Director of the CDU / CSU parliamentary group as the successor to Norbert Röttgen , who was then Federal Environment Minister; he was a member of the executive committee. Altmaier was elected by the parliamentary group with 98.4 percent. His term of office ended with his appointment as Federal Environment Minister on May 22, 2012.

In 2012, as a member of the parliamentary majority, he was chairman of the Parliamentary Control Committee (PKGr) for one year .

Peter Altmaier at the IHK Regional Conference West on October 28, 2019 in Bonn

When the position of the Advocate General at the European Court of Justice was to be filled in 2003, Altmaier was considered the CDU's preferred candidate for this post. The federal government under the then Chancellor Gerhard Schröder decided in June 2003 in favor of Juliane Kokott . Schröder justified this in a letter to Merkel with Kokott's "comprehensive scientific qualification". On November 23, 2005, Altmaier was appointed Parliamentary State Secretary to the Federal Minister of the Interior in the federal government led by Chancellor Angela Merkel .

Federal Minister in the Merkel government (since 2012)

On May 16, 2012, Altmaier was proposed by Federal Chancellor Angela Merkel to succeed Norbert Röttgen as Federal Environment Minister . His appointment as minister by Federal President Joachim Gauck took place on May 22, 2012. On December 17, 2013, he became Federal Minister for Special Tasks and Head of the Federal Chancellery . On October 7, 2015, the Federal Government named him as the central point of contact for the “overall political coordination of all aspects of the current refugee situation”. On October 24, 2017, Altmaier took over the post of Federal Minister of Finance on a temporary basis - until a new government was formed, after the previous incumbent Wolfgang Schäuble had been elected President of the Bundestag.

On March 14, 2018, Peter Altmaier was appointed Federal Minister for Economic Affairs and Energy in the Merkel IV cabinet by Federal President Frank-Walter Steinmeier . His name was announced on February 25, 2018.

Altmaier is the most important confidant of Chancellor Angela Merkel and is one of the few who duzen allowed.

From 2004 to 2008 he was Vice President of the Network European Movement Germany and from December 2006 to November 2011 President of the non-partisan organization Europa-Union Germany . Since 2011 he has been honorary president of the association. Altmaier is a member of the European Union parliamentary group of the German Bundestag .

On November 17, 2010 Altmaier was appointed Honorary Senator of the Federal University of Applied Sciences for Public Administration .

In the 1990s, Altmaier campaigned for the modernization of citizenship law and kept in contact with migrants, refugee associations and churches. He advocates opening the CDU to the Greens . He called on Helmut Kohl to resign in 1998 and criticized Roland Koch for what he believed to be xenophobic election campaigns, and in 2003 he turned against the Vatican's call to combat so-called gay marriages . Angela Merkel appointed him in 2002 as CDU chairman of the first committee of inquiry of the 15th electoral term of the German Bundestag , the so-called "committee of lies".

Together with Ronald Pofalla , Norbert Röttgen , Eckart von Klaeden and others, Altmaier was considered to be one of the " young wild ones " and a member of the informal pizza connection . Looking back, he said, “We also talked to them about a new citizenship law [...]. But then we pushed it forward with the FDP . "

In October 2017, Altmaier traveled to Turkey for secret negotiations about the release of the imprisoned German citizens Deniz Yücel , Meşale Tolu and Peter Steudtner . According to Spiegel information, he had reached an agreement with Turkey for Steudtner's release. The German government did not disclose what the Turkish government was promised.

Altmaier 2013 at the electromobility summit

In his office as Federal Environment Minister, the Federal Association for Renewable Energy accused him of unnecessarily slowing down the expansion of renewable energies and reducing the expansion targets. At the time, Peter Altmaier feared "that the costs of the energy transition and the restructuring of the energy supply could add up to around one trillion euros by the end of the 1930s."

Altmaier responded to rising electricity costs by publishing a brochure in which he gave tips on how to save energy and called for a change of electricity provider .

In October 2014 Altmaier came under cross-party criticism after he a. had sent a letter to the members of the NSA committee of inquiry in which he reserved a criminal complaint against unknown persons in the event that BND documents classified as secret were to become public in the future . This had been the case in the previous weeks. For example, there was a report on the secret service program Eikonal , according to which the BND is said to have passed on data from German citizens to the NSA for years. The committee members Hans-Christian Ströbele (Greens) and Martina Renner (left) spoke of an “attempt to intimidate the committee members”. The committee chairman Patrick Sensburg (CDU) stood in front of the members of the parliament. The media saw the letter as an open threat to the committee.

Altmaier advocated marriage for everyone in the Bundestag at the end of June 2017 .

In November 2019, Altmaier spoke out in favor of a reform of the electoral law with the aim of increasing the political participation of citizens.

In the run-up to legislative resolutions, online hearings should take place, Bundestag and Landtag elections should be more concentrated, and the federal legislative period should be extended to five years.

Altmaier, who is counted among the modernizers of his party, is considered by journalists to be communicative and network-savvy. According to the Handelsblatt, he was “noticed because of his proximity to the Internet community” and “one of the first top politicians to actively use Twitter ”. Among other things, Altmaier remarked: “A Twitter account does not yet make network competence”. He met with supporters of the Pirate Party to discuss data protection and copyright law with them . Altmaier is a founding member of Cnetz - Association for Network Policy with the aim of "a civil and responsible network policy that creates a fair balance between the different interests in a pluralistic society on the Internet".

Altmaier made his entry on Twitter publicly and then used the service in everyday life. Altmaier, for example, rejected doubts about his calculations on the costs of the energy transition via Twitter. A recent study confirms that he was “more interested in a dialogical understanding with the followers” ​​compared to other politicians.

In 2004 Altmaier was made a Knight of the French Legion of Honor .

In 2012 the Saar state press conference awarded him the Golden Duck media prize .

Minister of Economics of the Federal Republic of Germany

Finance Minister of the Federal Republic of Germany

Heads of the German Federal Chancellery

Environment ministers of the Federal Republic of Germany

see also: Office holder since 1987 of both German states

Commissioner for the federal intelligence services

President of the Europa-Union Germany