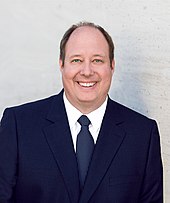 Helge Reinhold Braun (* 18th October 1972 in Giessen ) is a German politician of the CDU , a doctor and a directly elected Member of Parliament of the constituency casting . On March 14, 2018, he was appointed Federal Minister for Special Tasks and has been Head of the Federal Chancellery since then . Before that, Braun was Minister of State for the Chancellor in the Merkel III cabinet .

After high school in 1992 at the Liebig School in Giessen and the military service in Koblenz studied Helge Braun 1994-2001 with a grant from the Konrad Adenauer Foundation medicine at the University of Giessen . Afterwards he was employed as a research assistant ( assistant doctor ) at the University Hospital Gießen and Marburg at the Clinic for Anaesthesiology, Intensive Care Medicine and Pain Therapy until his second mandate in 2009. In 2007 he was with a study on the impact of intraoperative tachycardia (rapid heart rate during surgery) on postoperative prognosis for MD PhD. At the end of June 2015, the Senate of the Johann Wolfgang Goethe University in Frankfurt am Main awarded him the title of honorary professor .

Braun is married and a Roman Catholic .

Braun was a member of the city council of the university town of Gießen from 1997 to 2009. From 2006 he was chairman of the CDU district parliamentary group.

In the 2005 Bundestag election , he failed in the direct election against the SPD direct candidate Rüdiger Veit and could not enter the Bundestag via the state list either.

In the 2009 Bundestag election he won the direct mandate of the constituency of Giessen with 59,441 (36.7%) votes and has been a member of the German Bundestag again since then. As a result, he was appointed parliamentary state secretary and again elected deputy chairman of the Hesse regional group of the CDU / CSU parliamentary group.

In the Merkel II cabinet , Braun was Parliamentary State Secretary to the Federal Minister for Education and Research .

Braun was appointed by Chancellor Angela Merkel as Minister of State for the Chancellor for the reduction of bureaucracy, better regulation and the coordination of federal-state relations in the Chancellery in the Merkel III cabinet on December 17, 2013 . In this position he also coordinates the federal and state governments in dealing with the refugee crisis in Europe .

Since February 25, 2018, he has been the designated minister of the Chancellery in the Merkel IV cabinet and took office on March 14, 2018.

Heads of the German Federal Chancellery

Acting heads of the state or senate chancelleries in Germany