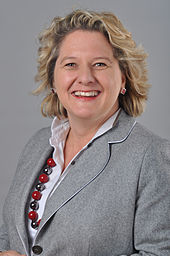 Svenja Schulze (born September 29, 1968 in Düsseldorf ) is a German politician ( SPD ). She has been Federal Minister for the Environment, Nature Conservation and Nuclear Safety in the Merkel IV cabinet since March 14, 2018 .

From July 15, 2010 to June 30, 2017 she was Minister for Innovation, Science and Research for the State of North Rhine-Westphalia .

Schulze completed her Abitur in 1988 at the Norf grammar school in Neuss . She then studied German and political science at the Ruhr University in Bochum , which she completed in 1996 with a Magistra Artium . From 1993 to 1997, she freelanced in advertising and public relations , and from 2000 to 2004, she worked as a management consultant focusing on the public sector, most recently at Booz Allen Hamilton .

After the state elections in 2010, Hannelore Kraft appointed her to the Kraft I cabinet as Minister for Innovation, Science and Research . With the abolition of tuition fees in North Rhine-Westphalia, Schulze launched one of the government's major political projects. In 2011, however, the so-called “ atomic ball affair ” fell within her area of ​​responsibility . On June 21, 2012, she was appointed to the Kraft II cabinet in her previous ministerial office.

From June 2017 to March 2018 Schulze was General Secretary of the SPD North Rhine-Westphalia . On December 8, 2017, she was elected as an assessor to the SPD party executive. The following day she was also elected to the party presidium.

On March 9, 2018, Schulze was nominated by the SPD party executive as the new Federal Minister for the Environment, Nature Conservation and Nuclear Safety for the Merkel IV cabinet .

Schulze is a member of the Arbeiterwohlfahrt , IG Bergbau, Chemie, Energie (IG BCE), ver.di , the Naturschutzbund Deutschland (NABU) and the Slowfood association . She is a co-founder of the network "Frauenzeiten".

Environment ministers of the Federal Republic of Germany

see also: Office holder since 1987 of both German states

Science Minister of the State of North Rhine-Westphalia