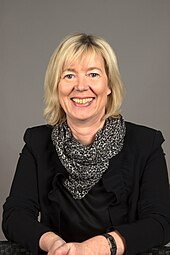 Doris Ahnen was born in Trier in 1964 as the daughter of a sales representative and a shoe seller. After graduating from high school in 1984 at the Friedrich-Spee-Gymnasium in Trier-Ehrang , she studied political science , public law and education at the Johannes Gutenberg University in Mainz . She finished her studies in 1990 with a Magistra Artium . From 1986 to 1987 she was chairwoman of the General Student Committee (AStA). After completing her studies, she worked as a personal advisor to the President of Johannes Gutenberg University, Jürgen Zöllner . After Zöllner was appointed Minister of Science for the State of Rhineland-Palatinate in 1991, Ahnen became head of the ministerial office.

Doris Ahnen is Catholic and was married to Matthias Kollatz until 2018 .

In 1988 she ran as a representative of the reform socialist movement for the Juso federal chairmanship and was narrowly defeated by Susi Möbbeck . From 1988 to 1990 she was Deputy Federal Juso Chairperson and from 1997 to 2009 she was a member of the board of the SPD sub-district of Mainz, from 2005 as Deputy Chairperson. She has been deputy chairwoman of the SPD Rhineland-Palatinate since 2004 , has been a member of the SPD party executive committee since 2007 and the party presidency since 2009.

Doris Ahnen has been a member of the Rhineland-Palatinate state parliament since 2006. In 2011 she only lost her direct mandate with 13 votes to Wolfgang Reichel , but was still above her list position in the state parliament. In the state elections on March 13, 2016, she was able to win back her direct mandate in the Mainz II constituency . On June 27, 2020, she was nominated again as a candidate for the Mainz II constituency for the 2021 state election .

In 1996 Doris Ahnen became State Secretary in the Rhineland-Palatinate Ministry for Education , Science and Further Education.

On May 18, 2001, Prime Minister Kurt Beck appointed her to his cabinet as Minister for Education, Women and Youth. In December 2006 her portfolio was expanded to include responsibility for science and culture. The women's department was transferred to the Ministry of Labor, Social Affairs, Family and Health, which has since been given an expanded name. Since May 18, 2011, Doris Ahnen has been responsible as minister for the areas of education, science, continuing education and culture before moving to the Rhineland-Palatinate finance department on November 12, 2014.

In 2004 Ahnen was President of the Standing Conference of the Ministers of Culture of the Federal Republic of Germany (KMK). During its presidency, the KMK decided to introduce the German spelling reform . Ahnen has been chairwoman of the Rhineland-Palatinate Foundation for Innovation since 2006 . In 2007 she became chairwoman of the board of trustees of the Rhineland-Palatinate Foundation for Culture . Since 2012 she has been deputy chairwoman of the Joint Science Conference (GWK) and in 2013 the chairwoman of the GWK (elected in November 2011 for two years) and thus the successor to Annette Schavan . Ahnen was re-elected in November 2013 and, after one year, takes turns with Johanna Wanka in the GWK chairmanship.

Doris Ahnen was chairwoman of the supervisory board of the Mainz University Medical Center . She was a member of the 12th , 13th , 15th and 16th Federal Assemblies for the election of the Federal President.

Cabinet of the State of Rhineland-Palatinate

Finance Minister of the State of Rhineland-Palatinate

Education Minister of the State of Rhineland-Palatinate