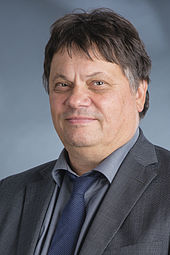 Strehl was born the younger of two sons. He later studied mathematics and business administration . He has been a member of the Greens since 1982.

Strehl is married and lives with his wife in Bremen. He has a daughter.

In 1984 he became parliamentary leader of the Greens in the Bonn parliamentary group . From 1988 to 1991 he was financial advisor to the North Rhine-Westphalian Greens. From 1991 to 1996 he was federal finance officer in the federal office of the Greens. From March 1996 to September 2011 Strehl worked as a full-time federal treasurer and member of the federal board of Bündnis 90 / Die Grünen. Since October 2011 he has been State Councilor at the Bremen Senator for Finance Karoline Linnert (Greens) as successor to Dieter Mützelburg (Greens).

He has been Senator for Finance in the Bovenschulte Senate since August 2019, replacing Karoline Linnert.

Senate of the State of Bremen

See also : Senate of the Free Hanseatic City of Bremen  and Senate Bovenschulte

Finance Senators of the Free Hanseatic City of Bremen since 1945