Joachim Tiburtius in 1947 (in the middle with glasses) during a discussion in the RIAS with Otto Bach (SPD) and Carl-Hubert Schwennicke (FDP, right).

Joachim Tiburtius was born on August 11, 1889 in Liegnitz as the son of the Prussian building clerk Friedrich Tiburtius (later active as regional building officer for the province of West Prussia in Danzig) and his wife Cleophea Tiburtius, née. Mühlmann. Tiburtius came from a family of pastors and landowners from Rügen , whose ancestors included the reformer of St. Gallen Joachim von Watt (Vadianus). Tiburtius was also related to Theodor von Zahn and Adolf Schlatter . He was born with Louise Charlotte Wolff married, from this marriage the son Wolf-Joachim emerged. 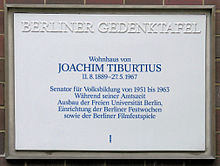 After graduating from the Humanistic Gymnasium in Gdansk in 1907, Tiburtius studied law and political science , philosophy and history in Lausanne , Berlin , Breslau and Königsberg . In Lausanne he became a member of the Société d'Étudiants Germania Lausanne . In 1911 he passed the first state examination in law and then worked as a trainee lawyer. After his military service from autumn 1911 to autumn 1912, graduating as a lieutenant in the reserve in the Guard Rifle Battalion , he continued his studies and studied economics , history and philosophy at the Friedrich-Wilhelms-Universität (today's Humboldt- University of Berlin ). Franz Oppenheimer was one of his university teachers , whom he held in high regard and who wrote the introductory text for his memoirs . Tiburtius was also the long-time assistant to the economist Max Sering . In 1914 he received his doctorate from the Friedrich-Wilhelms-Universität zu Berlin. phil. PhD in Economics. His dissertation was entitled The Concept of Need. Its psychological basis and its importance for economics .

From 1915 to 1917 Tiburtius was a consultant for labor issues in the War Ministry through the mediation of his university professor Franz Oppenheimer . There he was active in social reform in the department for postponement and built up close relationships with the Society for Social Reform . Tiburtius brought a draft of an army order drawn up by Franz Oppenheimer, which promised the soldiers returning home after the end of the First World War the prospect of acquiring sufficient property, into the headquarters, which then served as the basis for the well-known Hindenburg army order. From the summer of 1918 he worked at the pension office of the Deputy General Command of the Guard Corps , and from October of the same year he was an advisor at the Reich Ministry of Labor . There he rose to government councilor in 1920 and to senior government councilor in 1923 . From 1925 to 1933, after resigning from the civil service, he was a managing board member of the main German retail community and at the same time a member of the Provisional Reich Economic Council . He was also a member of the DVP from 1923 to 1930 .

According to the historian Fritz Stern , Tiburtius was one of the " conservative revolutionaries ". During the time of the November Revolution of 1918/19, Tiburtius, together with Paul Schiemann , Eduard Stadtler , Heinrich von Gleichen , Oscar Müller and others, belonged to the Association for National and Social Solidarity (Solidarity) , which was initiated by Heinrich von Gleichen in 1918. This association only existed for a short time and the individual members subsequently joined various party political camps - equals into the conservative, Müller into the social democratic, Schiemann into the liberal and Stadtler finally into the fascist. Tiburtius himself was in the Brotherhood of the Confessing Church - an opposition movement of Protestant Christians - against attempts to bring the German Evangelical Church into line with National Socialism and after 1945 joined the CDU .

From 1933 to 1935 he was managing director of the main community of German retail trade, later in the retail business group, and from autumn 1935 head of the research center for trade at the Reichskuratorium für Wirtschaftlichkeit . In 1933 he also accepted an appointment at the Berlin School of Commerce and was, at the same time, a member of the Marketing Committee of the International Chamber of Commerce in Paris. In 1940 he wrote his habilitation at the University of Cologne .

In 1942 he was called up as a first lieutenant and was later as captain economic expert at the head of the armed forces until 1945. In addition, Tiburtius represented from 1942 the professor for business administration at the Leipzig University of Commerce . However, he was denied a final appointment at this time, probably mainly because of his participation in the Brotherhood of the Confessing Church . From 1943 on, Tiburtius held lectures as an honorary professor at the Berlin School of Commerce .

After the Second World War, Tiburtius was offered a position as full professor of business administration at the Faculty of Social Sciences at the University of Leipzig , where he taught from 1946 to 1948. In addition, he worked from 1945 to 1947 in the central administration for the fuel industry in the Soviet occupation zone . In 1946 he was elected city councilor of the CDU for Greater Berlin. In 1948 he received the chair for economics at the Free University of Berlin , for the establishment of which he had campaigned as a city councilor. He was also head of the research center for trade at the Free University, as well as head of department at the German Institute for Economic Research in Berlin-Dahlem.

In early 1951, Tiburtius was elected to the Senate Department for Education, Youth and Family in Berlin . Until 1963 he headed this department for three legislative terms under the ruling Berlin mayors Ernst Reuter (1949–1953, SPD), Walther Schreiber (1953–1955, CDU), Otto Suhr (1955–1957, SPD) and Willy Brandt (1957– 1966, SPD). The department was one of the most extensive and complex departments and included all areas of Berlin's cultural life. Until the area of ​​sport was transferred a little later to the responsibility of the Senator for Youth and Sport , his huge portfolio ranged - as he said - "from Furtwängler to football".

During the Cold War , tensions between East and West Berlin also increased in the cultural sphere : in 1954, Tiburtius declared in the BZ in the evening that he would "never again allow communists to conduct our business." he issued a general work ban on East Berlin theaters for artists residing in West Berlin. Invitations should only be accepted from “unsuspecting bodies”, artists should urge the removal of political banners and peace slogans in the performance venues and, in particular, invitations to the houses of the Society for German-Soviet Friendship should be refused. The artists would be held responsible for any failure to follow these instructions.

During his tenure, Tiburtius arranged for the museum treasures that had been relocated and found in the western occupation zones to be returned to West Berlin from the holdings of the Prussian cultural heritage and ensured the reopening of the Berlin Schiller Theater and the establishment of the Academy of Arts . During this time, the America Memorial Library was built and the incorporation of the German University of Politics into the Free University of Berlin was initiated. He established the Berliner Festwochen in Berlin's cultural scene , and it is mainly thanks to him that Carl Ebert and Herbert von Karajan have retained their ties to Berlin. After Wilhelm Furtwängler's death (1954), Tiburtius asked Karajan whether he was ready to take on the Berlin Philharmonic Orchestra's USA tour planned for 1955 . Karajan agreed on the condition that he would only take over as chief conductor-designate of the orchestra. Tiburtius accepted this and Karajan was appointed chief conductor of the Berlin Philharmonic for life.

From 1951 to 1967 he was Evangelical Chairman of the Society for Christian-Jewish Cooperation in Berlin eV, where he worked as a senator for popular education for reconciliation between Christians and Jews.

His grave of honor is located in Berlin on the old Lichterfelde cemetery . The bridge built in the course of Schildhornstrasse to Neue Filandastrasse over Schloßstrasse in Berlin in 1971 was called 'Joachim-Tiburtius-Brücke'. In 1959 he was awarded the Great Cross of Merit with Star and Shoulder Ribbon , in 1962 he received the Great Gold Medal of Honor with Star of the Republic of Austria . He was also an honorary citizen of the Free University of Berlin. The State Conference of Rectors and Presidents of Berlin Universities (LKRP) awards the Tiburtius Prize of Berlin Universities, named after Tiburtius, for outstanding diploma theses and dissertations that have been written at Berlin universities.

Berlin School and Education Senators since 1945