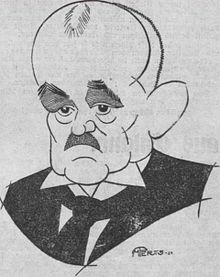 Paul Schiemann was born as the son of the lawyer Julius Schiemann and nephew Theodor Schiemann in 1876 ​​in a German Baltic family. After attending school in Germany , he began studying at the University of Dorpat , but continued after the Russification of academic life in Germany. After completing his legal studies and doctorate in Greifswald in 1902, he returned to the Baltic States to become a theater critic in Reval , before the opportunity arose in 1907 to work as a critic for the Rigaschen Rundschau . There he rose quickly due to his talent, which he used to turn against the conservative classes (especially the knights ). Such was his hope at the outbreak of World War I that no power would triumph. He only saw an option for the future in democratization. However, because of what was happening in Russia, he warned in 1917 against a proletarian revolution that would only lead to anarchy . At the same time he joined the Baltic German Democratic Party .

Towards the end of the war, Schiemann was in Berlin , where he made the acquaintance of a number of personalities from the liberal bourgeoisie such as Max Weber , Friedrich Naumann , Theodor Heuss and Hans Delbrück . He used his stay to campaign for the German government to support democracy in Latvia and Estonia . Back in Latvia, he took part in the National Committee under Kārlis Ulmanis , which ultimately meant his entry into national politics. In addition to his work at the Rigaschen Rundschau , where he was editor-in-chief from 1919 to 1933, he was now more and more involved in political Baltic-Germanship. He was in charge of a list with which the Baltic German parties ran for elections. Schiemann was a co-founder and board member of the Association of German Minorities in Europe and from 1925 Vice-President of the European Nationalities Congress (ENK). In 1923 Schiemann initiated a - ultimately unsuccessful - referendum against the transfer of the Lutheran Church of St. Jacob in Riga to the Catholic Church.

Despite his criticism of communism , on the question of nationality politics he leaned on the ideas of Austrian Marxists such as Karl Renner and Otto Bauer . At the same time, he found a field of activity in this area that would become a passion for him in the following years. The post-war period raised a number of problems, one of which was the coexistence of nations in the newly created states. Schiemann also saw this as a threat to the future and developed his theory of "anational states" from this. He called for the overcoming of nation states and the establishment of nation states, precisely those "anational states". He presented this idea at the European Nationalities Congress. Inspired by the Locarno treaties and Stresemann's peace policy , Schiemann saw an opportunity to assert the interests of the minorities. But this confidence did not last long after more and more authoritarian systems prevailed in Europe. As early as 1924, Schiemann had warned of a victory for the nationalist movement in Germany, which would mean the end of Germanism in the Baltic States; a prediction that came true after Hitler came to power . As editor-in-chief of the Rigaschen Rundschau at the beginning of 1933, Schiemann resisted the pressure of the Reich trustee, who had the majority of shares in the Rigaschen Rundschau , to take account of the new conditions that had arisen after Hitler's appointment as Reich Chancellor, and declared that it should be unacceptable if the Rigasche Rundschau suddenly wanted to take up National Socialist ideas. In March 1933 Schiemann fell ill and went to Vienna, where the headquarters of the ENK was located; on June 30, 1933, he resigned as editor-in-chief. His illness was the vehicle to cover his dismissal after more than 25 years working for the Rigasche Rundschau . In September 1935 he resigned from his position as Vice President of the European Nationalities Congress for health reasons.

On March 29, 1936, the employees of the Rigaschen Rundschau thanked their former editor-in-chief on the front page of the newspaper for his services combined with congratulations on his 60th birthday. Marked by illness, he avoided a direct confrontation with the National Socialists and escaped to Latvia in 1938 after the “Anschluss” and the German invasion of Austria, "quasi into exile at home". When in December 1939, based on the Hitler-Stalin Pact of August 23, 1939, the " relocation " of the German ethnic group in the Baltic States agreed in the confidential protocol of September 28, 1939 between the German Reich and the Soviet Union began, he refused to leave his home to leave. During the German occupation he showed moral courage and hid a Jewish woman, who later became film sociologist Valentīna Freimane . The minority politician died in 1944 shortly before the Red Army marched into Riga again.

On the 50th anniversary of his death in 1994, two memorial plaques in Latvian and German were erected in Riga on Herderplatz opposite the entrance to the cathedral in recognition of his services as a member of all four parliaments and opponents of totalitarianism of all kinds at his former place of work, the Haus der Rigaschen Rundschau appropriate. In 2000, the Yad Vashem Memorial honored him with the title Righteous Among the Nations .