The völkisch movement was a German national and anti-Semitic - racist movement . It comprised associations, parties, publications and other groups and individuals who gained great influence on the public in the German Empire and in Austria-Hungary from the last quarter of the 19th century .

Its character of a heterogeneous nationalist - reformist protest movement corresponded to the syncretistic völkisch world view . The predominantly male and Protestant clientele showed a predominantly bourgeois social profile, characterized by the old and new middle class.

The movement sought to rassenideologischer basis ( anti-Semitic , anti-Slav , antiziganistisch , antiromanisch ) after an anti-egalitarian , militaristic , male-centered, (vocational) corporately organized society, "in a Germanic - Christian " or neo-pagan should be well-founded "species-specific" religion. In many cases - based on a Germanic ideological value system - its aim was a “racial state” of Central European or a confederation of Pan-Germanic style.

Central to the völkisch worldview was the demand for a species-specific , i.e. H. a religion that is consistent with race and people . In accordance with the heterogeneous ideological and organizational structure of the movement, however, there were no common religious convictions, but rather very different religious designs. They range from an Aryanized and Germanized Christianity to the decisive rejection of Christianity and the attempt to revive supposedly pre-Christian Germanic beliefs . In some cases, elements of esotericism were also included.

The ethnic-religious communities were mainly driven by the desire for an autochthonous national culture that was not deformed by any outside influences , less by the will to restore the pagan Germanic world of gods. This search was connected with the search for the local sagas of gods and heroes and Germanic mythology and thus an upgrading of Germanic evidence such as runes and the Edda .

Only a small part of the ethnic groups turned away from Christianity completely. The Germanic and German believing communities belong to the periphery of the ethnic movement and were very small. The largest of these communities, the Germanic Faith Community of Ludwig Fahrenkrog, had just 120 to 150 members at the beginning of the First World War . The greater part of the Volkish clung to (Protestant) Christianity. The attempt to Germanize and “de- Jew ” Christianity was numerically more significant .

From the perspective of German Christianity , Christ was not a Jew but an Aryan. The roots of Christianity were traced back to an (Indo) Germanic ancient religion. Christianity is originally an Aryan religion , which corresponds to the Germanic and German essence and whose Aryan character is to be preserved and cleaned of foreign influences.

The eclectic doctrine of Ariosophy by Jörg Lanz von Liebenfels , which includes racist ideas as well as elements of esotericism, is part of the ethnic movement . The ideology of the Thule Society founded by Rudolf von Sebottendorf at the end of the First World War in 1917/18 was also influenced by ariosophy . The British esoteric researcher Nicholas Goodrick-Clarke uses the term ariosophy in a broader sense for esoteric currents of the folk movement.

The NSDAP later tried to stylize itself as the driving force of the völkisch movement in order to emphasize the supposed originality of its own worldview. In Mein Kampf, for example, it says : “If today all sorts of associations and associations, groups and small groups and, if you like,“ big parties ”claim the word“ folkish ”, this is itself a consequence of the action of the National Socialist movement . “( Adolf Hitler , Mein Kampf ). The party newspaper was from the beginning to the end of the era of National Socialism " Volkischer Beobachter ".

In historical studies, on the one hand, “völkisch” is understood as a collective term for the nationalist-anti-Semitic rights that have been forming politically and culturally in Germany since the 1890s. It can be found, for example, in the Handbuch zur Völkische Movement (1996) by a group of authors around Uwe Puschner. Uwe Puschner recognizes the specifics of the völkisch movement in the connection of nationalism and racism with religious reform ideas.

In addition, there is a narrower definition of the term, which understands the völkisch movement as a partial phenomenon of the radical right. Stefan Breuer explains the emergence of the nationalist movement from anti-Semitism during the imperial era. In addition to this, middle-class ideology, right-wing nationalism and partial anti-modernism (rejection of the "mass democratic" while affirming the "bourgeois-liberal modernity") were characteristics of the Volkish. Racism and anti-Semitism were by no means only to be found among Völkische, but also in other areas of politics. The aim was to create an ethnically closed population ("German people") in an ethnically defined nation-state. Racist and anti-Semitic positions would have served this.

Thomas Gräfe, on the other hand, sees radical nationalist fantasies of purification and anti-Semitism as the common denominator of the competing ethnic groups and ideological designs. In the first part of his study, he traces the origin and development of the völkisch movement in the empire, but under this term he deals with precisely the movement that historical research calls anti-Semitic.

What these authors have in common is that they define the völkisch movement as racist and anti-Semitic.

Formation and first upswing around 1900

After the first völkischer associations were founded in the 1890s, such as the Deutschbund founded in 1894 , the völkisch movement in Germany was formed as a loose collection movement in close cooperation with organized nationalism , above all the Pan-German Association , since the turn of the century . In addition to close contacts with the Pan-German Movement in Austria , which is closely related to it ideally, personally and institutionally, there were lively exchange processes with the bourgeois reform movements that had emerged since the 1880s and the anti-Semitic split parties. In the völkisch movement there were groups that differed considerably in terms of their political, social and cultural goals as well as their organizational form and membership strength. Since the turn of the century, numerous ethnic and religious associations, leagues and orders have emerged, which split into a German-Christian and a neo-pagan direction. Important publication organs of the Völkische were the Bayreuther Blätter edited by Hans von Wolehmen , Theodor Fritsch's magazine Hammer and Wilhelm Schwaners Volkserzieher . Reading communities like the Reichshammerbund arose around these magazines . The founding of umbrella organizations on the eve of the First World War did nothing to change the fact that the nationalist movement remained fragmented and had a weak membership. However, their ideas about multipliers such as the German National Sales Aid Association, the student associations and liaison system and the youth movement, as well as the high-circulation works of Paul de Lagarde, Julius Langbehn and Houston Stewart Chamberlain, had a considerable social impact even before 1914.

The beginning of the First World War led to the loss of importance of the nationalist movement; many publication organs came under preventive censorship and were repeatedly banned, such as the hammer , the Deutschvölkische Blätter and the Staatsbürger-Zeitung . Despite the war, their primary focus was on the enemy within. With the war, foreign policy moved into the foreground of interest in Germany, for which the Völkische did little of their own. Insofar as ideas about Germany's foreign policy orientation were expressed, they were contradictory and inconsistent. In the First World War, the Völkische therefore sought to close ranks with the old nationalism . 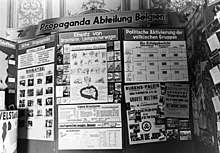 “Political activation of the ethnic groups” as one of the touted political means in occupied Belgium on a blackboard in an exhibition about the work of the propaganda department in Belgium, approx. Dec. 1941 / Jan. 1942

The Völkische rejected everything that was praised as progress in the Weimar Republic. They rejected both left party Marxism and democracy. Although the Völkische officially condemned political violence, they maintained connections with right-wing extremist military organizations, took part in the Kapp Putsch and the Hitler Putsch and were involved in assassinations and femicide . In addition to the change in the political system, the influx of demobilized soldiers into their organizations may have contributed to the radicalization of the Völkische.

After the number of ethnic organizations and supporters had increased significantly after 1918, with the Deutschvölkischer Schutz- und Trutzbund (1919–1923), an influential cartel of ethnic associations briefly existed and ethnic associations moved into state parliaments and the Reichstag , the ethnic movement began in 1924/25 Due to its structural deficits , it was gradually sidelined by the ideologically close National Socialism , the new reservoir of the radical right. During this time, especially after the re-establishment of the NSDAP, contradictions were emphasized on both sides. They often expressed themselves as a generation conflict between the old Völkisch and young National Socialists. Nevertheless, there were - especially ideologically - close similarities between the two movements. The clearest personal overlaps between Völkisch and National Socialists existed in the settlement movement of the Artamans founded in 1926 .

Although individual völkisch organizations and leaders joined National Socialism - to varying degrees - and the transfer of power to Hitler was welcomed by the majority, the völkisch organizations (and their leadership) that continued after 1933 quickly lost their importance. Individuals were absorbed into the National Socialist organizational structure, the majority dissolved or, until the victorious powers were banned after the end of the war, lived in a shadowy existence equivalent to dissolution. Many supporters had joined the criminal blood-and-soil ideology in the Third Reich by 1945 .

Isolated attempts at an organizational new beginning after 1945 remained unsuccessful, with the exception of existing neo-pagan small businesses of the folk- religious sub-movement such as the “German-Believing Community” or the Species Community - Germanic Faith-Community with a way of life that conforms to its nature .

Set pieces of ethnic religion and world views can also be found beyond these German neo-Germanic-pagan groups; they are part of the international neo-pagan movements, mixed with ideologies of other origins and in many ways and often no longer immediately recognizable as folkish . These remnants of völkisch thought are not limited to small subcultures, but find their way into wider social circles and widespread dissemination through popular genres through their medial communication, which goes hand in hand with their popularization. According to the literary scholar Stefanie von Schnurbein , products of fantasy literature based on the model of JRR Tolkien's The Lord of the Rings can also be classified in this context . As an example, she cites the novel Rheingold by the American author Stephan Grundy , which has become an international bestseller.

Ideological elements of the movement can also be found in international right-wing extremism and in associations such as the All-Germanic Pagan Front , sometimes also in various alternative movements and subcultures, such as the ethnic branch within the Asatru belief. Several neo-pagan Asatru religious communities categorically reject relations with National Socialism and the neo-Nazi scene, which does not rule out the spread of elements of ethnic origin.

The esoteric lines of tradition of a völkisch “ right esotericism ” are currently being taken up by some right-wing extremist groups to legitimize their racism . In Mecklenburg-Western Pomerania , for example, right-wing extremists refer to the historical Artamans . Ethnic set pieces are also often used within the music genres Neofolk or Pagan Metal .

The then chairwoman of the AfD, Frauke Petry, campaigned in a 2016 interview with Welt am Sonntag to get rid of the term “völkisch” from its Nazi involvement and to give it a positive connotation. The Duden definition ("National Socialist, in the racist ideology of National Socialism") displeases Petry because of its negative context. The term is subject to an ostracism. Völkisch is simply only the associated attribute of people.

The most important thought leaders, publishers and agitators of the völkisch movement include: