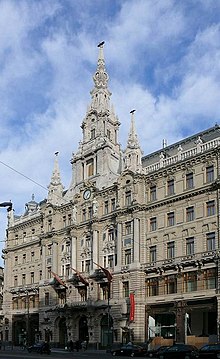 The New York Palace in Budapest

As eclectic (from ancient Greek ἐκλεκτός eklektós "is selected, choice") are referred to techniques and methods which have different systems (eg. B. styles disciplines philosophies) use and re-assemble the elements.

The term genre syncretism has a similar meaning . The term syncretism is used more in a religious and philosophical context.

The term was coined in antiquity , around the birth of Christ. At that time, different schools of philosophy coexisted, and there were thinkers and politicians who were called eclectics because they combined elements of different positions. The most famous representative of this direction was Cicero . In his ethical ideas, in particular, he essentially adopted the teachings of the Stoics , but also incorporated values ​​from the academy and the Peripatos . In Christianity , the eclectic motto of Paul of Tarsus applies. Check everything and keep what is good! ( 1 Thess 5:21  EU ) as a basic principle that facilitated the missionary inculturation of the new faith in the ancient world.

In the humanities , the term eclecticism characterizes the method of forming a new unit from set pieces from different systems , theories or world views . The often derogatory use of the term reveals a preference for self-contained, isolated systems of theory over the selection of correct statements from various theories when refuted elements are not adopted. That (scientifically legitimized) eclecticism should nevertheless be practiced is represented by Richter (2011).

Eclecticism in Art and Architecture

Eclecticism is characteristic of the styles of European art since the beginning of historicism . As an art process, eclecticism is important in postmodernism for critical reflection on existing material. The term eclectic or eclectic refers to a single work of art in which various past styles are processed. With regard to the respective artistic quality, a distinction must be made between imitation and personal development. The term can be given a negative emphasis if the artist chooses elements from other works instead of his own creation and combines them into a new work.

In architecture, eclecticism is the citing of architectural style elements from several past eras on a new building. This method can be found in particular in the historicism of the 19th century, but also in the 11th century in southern Italian Romanesque , where a mixed Arab-Byzantine-Norman style emerged, or in the postmodern architecture of the 20th century.

An example of eclecticism in architecture: St. Augustine in Paris . The facade with rose window and sculpture gallery follows the Romanesque style, while the dome is based on Renaissance models

An eclectic is someone who selects what is suitable for him from what is available and tries to adapt it to his purposes.

A well-known eclectic was the painter Bernhard Delsing .

Eclecticism is also used as an epoch term , analogous to historicism . As such an epoch term, eclecticism is considered unsuitable because there were other architectural attitudes at the time. As a substitute designation and demarcation can eclecticism against Historicism be used to the then popular style pluralism better classify: The numerous neo-styles were used in the architecture (see. Romanesque Revival , Gothic Revival , Neo-Renaissance , Neo-Baroque ) not only a reference to past history, but also to establish a location reference, a characterization of the building task or a coherence of the construction.

Eclecticism can, within historicism, also mean the stylistic mix of the formal apparatus used on a building.

The term eclecticism , in connection with historicism and with a derogatory connotation, can also represent a criticism of the selective design methods used by many architects of the 19th century.

Eclecticism as a method term

As part of the architectural design , there may be a selection process from existing styles and shapes. Elements from different models can also be combined with one another. These models sometimes come from similar architectural circles (Roman temple type with Greek columns) or from completely different ones (Renaissance portico next to Egyptian columns and Moorish window frames with Gothic spire). In the selection process, temporal references (as in historicism) or spatial (as in exoticism ) can play a role.

"Eclectic in itself is a good principle, that is, borrowing elements from the art of all kinds with which we can enrich and perfect the style that we have identified as our basis and core according to our plan."

Gottfried Semper, on the other hand, criticized the "art disciple" who "stuffs his herbarium full of all kinds of well-glued drawings"

"In the happy expectation that the order for a Valhalla à la Panthenon, a basilica à la Monreale, a boudoir à la Pompeii, a palace à la Pitti, a Byzantine church or even a bazaar in Turkish taste could not be long gone."

During the Roman Empire, a medical school known as the eclectic school arose in the 1st century , and its influence extended into the 4th century. It had developed from the traditions of the pneumatics school and incorporated elements of empiricists and methodologists in its healing concept . The writings of the eclectic are mentioned in Galenus , who saw himself as an eclectic and took an eclectic point of view both in his medical and in his philosophical views, Oreibasios and Aëtios by Amida . The doctor Agathinos from Sparta, who worked in Rome, was regarded by Galenus as the founder of the eclectic school. The doctor Herodotus (1st / 2nd century) and the surgeon Leonidas from Alexandria are named as his pupils. An important representative of the eclectic (also known as episynthetic ) was also the Agathinos pupil Archigenes of Apamea.