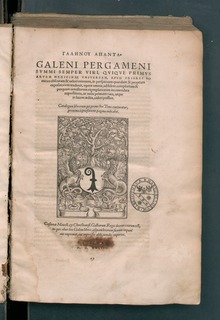 Galen of Pergamon , also (Aelius) Galenus ( ancient Greek Γαληνός , German Galen , in medieval manuscripts and early modern prints also Galienus ; * between 128 and 131 in Pergamon ; † between 199 and 216 in Rome ), was a Greek doctor who mainly worked in Rome and anatomist . Galen is considered to be one of the most important physicians of antiquity, whose extensive teaching dominated all medicine for 1500 years.

The most famous sanctuary of Asclepius around the middle of the 2nd century was located at Galen's birthplace, Pergamon . His father, the architect and mathematician Nikon, taught Galen in Aristotelian philosophy , mathematics and natural science .

Often in specialist publications outside of classical studies it is stated that Galenos had the gentile name Claudius - abbreviated Cl. - carried. In the ancient sources and the handwritten tradition of the Middle Ages, however, this is not attested. Only in modern works, beginning in the 15th century, was the name of Galenus or Galenus prefixed with a "Cl.". Presumably it was not the abbreviation of "Claudius", but the short form of the honorable attribute "clarissimus" ("famous"), with which the humanistic writers of the early modern era gave doctors.

The question of whether Galenus was a Roman citizen is closely related to this problem . It is often assumed that he had the right to be a citizen, with which he would necessarily have had a three-part name (the tria nomina ) according to Roman naming law . In addition to the name Claudius (which is not anciently attested), the names Aelius and Iulius are considered as Galen's gentile names. This is due to the fact that two men named Aelius Nicon and Iulius Nicodemus are known through inscriptions from Pergamon, one of whom could possibly be identical to Galen's father “Nikon”. Ultimately, however, the paternity cannot be proven for both and it is also not at all clearly ascertain whether Galenus actually had Roman citizenship.

From around 146 Galen dealt primarily with medicine . He studied near Smyrna . At the age of 19 he traveled to Alexandria , which at that time was a center of healing and the only place where human sections and examinations on cadavers were allowed. The extensive Alexandria library also had many writings with detailed drawings that aided his academic training. Healing cures and care took place at the time in an Asklepieion , in which both priests and healers were active. 158 Galen returned to Pergamon. There he looked after gladiators as a sports doctor and surgeon and at the same time had his own medical practice. During the Olympics , he provided medical assistance to the athletes. He treated their fresh injuries, which he could also describe scientifically.

From 161 Galen was in Rome. The healing of the respected philosopher Eudemus of Pergamon enabled him to work as a doctor of the Roman aristocracy. He left Rome around 166, probably because of an epidemic that broke out there ( Antonine plague ). Back in Pergamon, he resumed his work as a gladiator doctor. In 168, at the request of the Roman Emperor Marcus Aurelius, he traveled to Aquileia , where the “plague” supposedly broke out among the Roman soldiers. His precise description of the symptoms of the disease suggests, however, that it was more of a smallpox epidemic . In accordance with his wishes, from 169 in Rome he became the personal physician of the emperor's son Commodus , and later presumably also of the emperor P. Septimius Severus . In a major fire in Rome in 192, Galen's library was also destroyed, which he lamented in a work called On Indefatigability , only discovered in 2007 .

Galen died in Rome, the exact time is unknown. Some of the research assumes that he died in 199 or 200, but his death is now mostly dated around the year 216, often at least after 204.

Title page of the "Opera" published in Venice in 1547

Galen's main medical work is the Methodus medendi , it consists of 14 books. The main idea is that all appearances in nature and in humans serve a specific purpose. Galen understood the human being as a body-soul unity that is influenced from two sides, from the spiritual and from the matter.

He took up the four-element doctrine developed in philosophy , according to which fire, earth, air and water in different compositions represent the basic elements of all being. He also followed up on in the Hippocratic developed medicine already rudimentary four-juice teachings to which the four humors blood, phlegm, yellow bile and black bile in each case the four qualities (primary grades) warm and wet, cold and damp, warm and dry and cold and dry assigned. The four taste qualities postulated by Galen (secondary qualities ) are: blood - sweet, mucus - salty, yellow bile - bitter, black bile - sour and hot. In addition, he linked the four juices with the four phases of human life. For him illness was dyscrasia, a faulty mixture of juices. When diagnosing diseases, Galen placed particular emphasis on examining the pulse and urine .

Following this approach, Galen developed an independent pharmacotherapeutic system, which he presented in some of his writings. His De compositione medicamentorum in 17 and his De simplicium medicamentorum temperamentis et facultatibus in 11 books should be mentioned in particular among these writings devoted to the manufacture of medicines . The aim was a pharmacology derived from experience, based on knowledge of causal relationships and reason, which could be passed on, checked and further developed using the written word. Because "reason teaches us the general goal of healing in every ailment, experience the powers of the substance." Accordingly, the first part of his De compositione medicamentorum presented the theoretical basis of his medicine theory, while in the second part the special recipes followed in detail. With them, Galen insisted that they were tried and tested and that their value would be confirmed by the most recognized pharmacologists.

He divided the drugs he used into elementary ones that had only one of the four elementary qualities, combined them - they had two qualities, a main and a side effect - as well as specific ones for special cases, such as laxatives, emetics or dehydrating agents. While the elementary medicines called simplicia were partly based on the materia medica of the first-century doctor Pedanios Dioscurides , Galen had developed many of his composita through empirical studies. Each illness required its own medication, for the selection and dosage of which one had to consider the temperament , that is, the appropriate mixture of the juices of the patient himself, and of the affected part of the body in particular, as well as the effectiveness of the medication. In doing so, he placed therapy and pharmacology on a systematic basis.

He differentiated the efficiencies (or intensities) of his substances as follows:

Pathological changes in the balanced mixture of juices , which manifest themselves through heating, moistening, cold or drying out of the affected body parts, must be countered with counteracting drugs. Here, the attraction of a part of the body to certain drugs, which can be caused by the similar nature on an elementary level , must be taken into account.

The pharmacology of the Islamic and Western cultures up to the late Middle Ages was based on the complicated recipes of Galen . It was only under the influence of Paracelsus' medical teaching that this teaching , known as galenics , of the manufacture and preparation of medicines lost its importance in the course of the early modern period, and the term was retained.

In his work, Galen combined two medical approaches that had been in conflict for centuries.

This methodical synthesis, which also included the anatomy and physiology or natural philosophy of Aristotle, established Galen's decisive influence on medieval medicine up to the Renaissance . He carried out extensive sections and vivisections on animals and wrote almost 400 writings, which were summarized in 70 books after his death by Oreibasios (326–403). Almost a quarter of it is preserved in the original Greek or in Latin, Arabic or Syrian translations. Until the 17th century and beyond, they served as a medical teaching basis at universities.

However, many of Galen's views on human anatomy were wrong because he had simply transferred what he learned from his sections of pigs, monkeys, and dogs to humans. His works served as the basis for anatomical lectures and were considered so complete that for a long time there was no reason to review. It was not common, and often forbidden, to dissect human bodies. If doctors accidentally found deviations from Galen's teaching on a corpse, they considered the organ examined to be a malformation. Vesalius was the first in the 1530s to realize that Galen probably never dissected anyone. He complained that one could have learned more about anatomy from a butcher than from anatomical lectures. Vesalius' own dissections of corpses in the 1540s, which he had been able to carry out thanks to good relations with the authorities, stimulated anatomical research.

The cardinal signs of inflammation described by Celsus and later supplemented by Galen are still valid today :

If all body components - Galen understands the juices, the pneuma and the res naturales (the "constitutional conditions" of individual life) - are available in sufficient quality and quantity and these bodily functions in the sense of an expediency ( teleology ) in free flow, the result is health , sanitas .

For Galen there are flowing transitions between the state of health, sanitas , of being ill, aegritudo , and an intermediate state, neutralitas . This equilibrium or imbalance is regulated by the sizes of the res naturales , res non naturales (the non-constitutional and thus "conditional-physiological conditions or procedural processes" in the individual organism) and res praeter naturales . The influencing factors of these three groups determine how to deal with prophylaxis, praeservatio , health maintenance, conservatio sanitatis , or therapy, curatio . Galen regards as "res naturales":

In contrast, the so-called sex res non naturales (the name does not come directly from Galen) are those six fundamental conditions or basic conditions of human health that influence the correct mixture of body fluids :

Galen's systematically expanded work, which was also translated into Syriac and Arabic by Hunain ibn Ishāq (808-873) in the early Middle Ages (see also Articella ) was of such authority for posterity that it was published in 1400 It took years for it to be slowly overcome by recent research. His false hypothesis of the blood flow from the center, where the blood is formed in the liver, to the periphery of the body was not made significant until the 17th century by William Harvey and Marcello Malpighi , and in part by Ibn an-Nafīs as early as the 13th century Resistances revised.

In the 16th century, the "Galenists" (such as Leonhart Fuchs ) as followers of Galen's teachings and the "Arabists", who mainly referred to Avicenna , faced each other. "Galenism" increased at this time, "Arabism" decreased.

Galen's conception of humoral pathology persisted as a disease concept into the 19th century. His teachings were rightly preferred to others, especially in the Middle Ages, and were the basis of medical knowledge at European universities until the 19th century.

Galen as the namesake