The title of this article is ambiguous. Further meanings are listed under Commodus (disambiguation) . 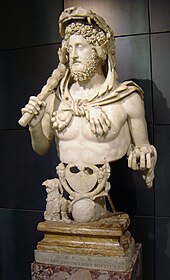 Commodus' full name changed several times; He was born as Lucius Aurelius Commodus , since his elevation to co-emperor in 177 he was called Imperator Caesar Lucius Aelius Aurelius Commodus Augustus , when he assumed sole rule in March 180 he took the name Antoninus and in October of the same year also the prenomen of his deceased father Mark Aurel on. His name was now Emperor Caesar Marcus Aurelius Commodus Antoninus Augustus . During his reign he took on a number of victory and surnames. In 172 he was given the victory name Germanicus , in 175 he and his father assumed the victory title Sarmaticus , in 177 he became Pater Patriae , 182 Germanicus Maximus and finally 184 Britannicus . In 183 the nickname Pius and 185 Felix appear for the first time in the title . In 191 he dropped the components of his father's name, but took over the gentile name of Hadrian . Now his name was Emperor Caesar Lucius Aelius Aurelius Commodus Pius Felix Augustus . 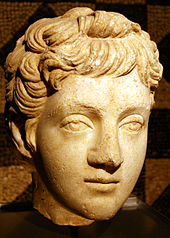 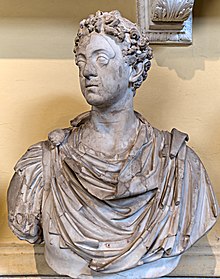 Portrait of the youthful Commodus, modern, heavily restored bust after ancient mutilation, probably as a result of the damnatio memoriae ( Vatican Museums )

Commodus was born with a twin brother who died prematurely as the son of the emperor Marcus Aurelius and his wife (also cousin) Faustina the Younger . When he was born, his father had been emperor for a few months, so it was a purple birth - in Rome this had only happened to Britannicus , who did not come to power. Contrary to what later sources sometimes suggest, Mark Aurel never seems to have considered not appointing Commodus as heir to power, on the contrary: at the age of five, he and his younger brother Annius Verus were awarded the title Caesar , making him a candidate for successor and was even formally identified as his father's sub-emperor, before he was finally raised to his father's co-ruler ( Augustus ) three years before his father's death and thus held all imperial powers (see below). He spent part of his youth at Mark Aurel's side during the Marcomann Wars on the Danube . After the failed usurpation of Avidius Cassius in 175, he accompanied his father on a long journey to the east of the empire, where he met, among other things, leading representatives of the Second Sophistics .

Since the said uprising of Avidius Cassius, Commodus has been strengthened and increasingly introduced to government tasks and built up as the designated successor. He was already princeps iuventutis in 175, followed by an acclamation to imperator for the first time in November 176 ; shortly afterwards he led a triumphal procession through Rome with Marcus Aurelius , and in the summer of 177 he was finally proclaimed emperor ( Augustus ) with equal rights alongside his father. With this he moved to the Danube in August 178 to fight again against Teutons and to collect military prestige.

On March 17, 180, his father died in a military camp on the Danube. Commodus was thus sole ruler. He prepared his father's funeral and quickly made peace with the Germans . Whether he deviated from the plans of his father, who according to some sources had planned to establish a new province, is unclear and unlikely. On October 22nd, 180 he entered Rome again in triumph.

At first, Commodus was apparently popular with the Roman people, especially since he was generous and provided enough bread and games ( panem et circenses ) . Since he tried to rehabilitate the state finances, which had been strained by his father's wars , by increasing the taxation of the senators and giving the commanders of the Praetorian Guard (the Praetorian prefects ) a lot of influence, tensions apparently arose with the Senate.

Relationship to the Senate and self-expression 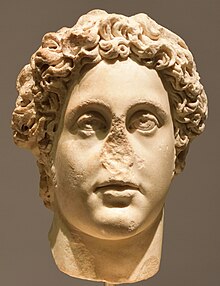 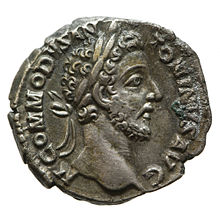 A denarius of Commodus 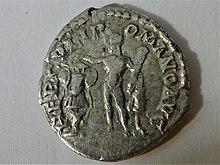 Commodus as Hercules on one of his denarii, Kampmann 41.91

181 or 182 - the exact date is historically not certain - the so-called Lucilla conspiracy against the emperor came about, but this failed because the assassination attempt failed. Since the circle of those involved (including Lucilla , the Emperor's sister) was small, the consequences seem to have been limited. However, the subsequent execution of some aristocrats probably led to tension with the Senate. From then on, the powerful Praetorian prefect Tigidius Perennis , who had been a confidante of Marcus Aurelius, de facto directed the affairs of state until he was accused of high treason in 185 and killed by soldiers. His de facto successor was the freed Marcus Aurelius Cleander , who in turn was killed in 190.

Towards the end, the emperor's government was increasingly shaped by mistrust and judicial murders , especially after he was again assassinated . What is certain is that the emperor fell out with the Senate at a very early stage, demonstratively relying on the army and the plebs urbana alone and thus questioning the system of the principate , which was based on the fiction that the Senate was still the center of the empire be. This earned the emperor the hatred of many aristocrats; According to the sources - admittedly hostile to him - he neglected state affairs, entrusted them to men who were not senators but knights and freedmen, and in the end he particularly enjoyed the role of Hercules , who showed himself to the people in the arena. Several coins were also minted depicting him as Roman and Imperial Hercules and bearing the legend HERCVLI ROMANO AVG. So he became the subject of ridicule by the senators, who nevertheless publicly cheered him.

According to Herodian and the Historia Augusta , Commodus himself appeared publicly as a gladiator , which has often been adopted by modern authors. The contemporary and eyewitness Cassius Dio , at the same time one of the most reliable sources, reports on the other hand that the emperor did appear as a charioteer and also took part in animal baiting ( venationes ). As a gladiator, however, Commodus only fought privately and without an audience, he never went public like that: “He liked to fight as a gladiator, at home with himself and in a way that he occasionally killed an opponent [ ...]. In public, however, Commodus renounced iron and human blood. ”Armed with a wooden sword at best, the emperor fought publicly against people in the circus.

Above all, it is the last years of rule in which Commodus pursued an exalted politics and self-staging that shaped his image among posterity. If a month had already been renamed in honor of Commodus, in 192 he renamed all months of the year according to his various honorary names (with Commodus for April, the other months were also given new names after Commodus, such as Lucius , Aelius , etc.), the Roman legions and other military units were given the surname Commodianae , the city of Rome was renamed Colonia felix Commodiana .

Damnatio memoriae of the Emperor Commodus on an inscription in the Römermuseum Osterburken .

In December 192, for unclear reasons, a conspiracy was formed against him in the emperor's closest circle. The motives given by the sources are stereotypical and their credibility is called into question. On the last day of 192, during a conspiracy at his court, led by the Eclectus and with the participation of his concubine Marcia , he was strangled with a rope in his bathroom by an athlete named Narcissus . With him ended the Antoninus dynasty founded by Antoninus Pius . Commodus fell into the damnatio memoriae , he was denied deification and the renaming of all twelve months after his own name that he had initiated was withdrawn. This was followed by the second year of the four emperors (sometimes referred to as the "five emperor year" or - misleadingly - even the "six emperor year"), because his successors Pertinax and Didius Julianus were murdered after a short time, and Septimius Severus , Pescennius Niger and later also Clodius Albinus fought about the imperial dignity. Since Septimius Severus, who finally emerged victorious, made himself the son of Marcus Aurelius through a fictitious adoption for the purpose of legitimizing himself, the damnatio of his "brother" Commodus was consequently canceled again.

Commodus was picked up and processed as a figure or object in some feature films :

He also appears as an antagonist in the book series The Adventures of Apollo by Rick Riordan .