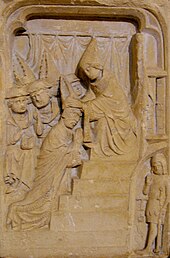 Consecration of a bishop, 14th century stone from the Abbey of Saint-Sernin

Consecration (from the Latin consecrare ' to consecrate, to sanctify') is in Roman antiquity, as in Christianity, the transfer of a person or thing into the sacred realm. Usually in Christianity the term consecration means a liturgical act that is practiced in the Roman Catholic Church , the Orthodox Churches , the Anglicans , the Evangelical Lutheran Churches and the Christian Community.

The state religion in ancient Rome knew the process of consecration especially when it came to the apotheosis of the Roman emperors (see Divus ). The first Christians of the early Church therefore initially used this word cautiously in the liturgical context.

The term consecration is most commonly used in connection with the gifts of bread and wine at Holy Mass , divine liturgy, or the celebration of the Lord's Supper .

Consecration of bread and wine

Understanding of the different churches

During the Eucharistic liturgy , the priest or pastor speaks the words of consecration, the words of institution of Jesus at the Last Supper , which are handed down in the Bible . For all Christians, this is linked to the memory of the suffering and death of Jesus in the context of the celebration of the Eucharist. The meaning and content of this liturgical act are determined and interpreted differently in the various Christian denominations.

According to Roman Catholic doctrine, this involves a mysterious change from bread and wine into the body and blood of Christ , which is traditionally described with the theological term transubstantiation ( codified in 1215 at the IV Lateran Council ). However, the doctrine of transubstantiation was never dogmatized, although it was established at the Council of Trent that this doctrine explained what happened well. After that, after the change, there is no longer the substance , but only the shape ( accidents ) of bread and wine. Under these figures, the substance of Jesus Christ is now present, according to Roman Catholic teaching, both in the host down to its smallest parts and in the shape of the wine and every drop. Jesus Christ is completely present: with flesh and blood, with body and soul, as true God and man, as crucified and risen. Therefore, in accordance with the provisions of the liturgy, it must be ensured that individual particles of the host are not carelessly thrown away, but rather collected and consumed if possible. According to the Catholic understanding, the sacramental presence of Christ is preserved in the Eucharistic forms even after Holy Mass, which is why consecrated hosts are kept in the tabernacle in Roman Catholic churches . According to ancient church custom, communion can be given to the sick or, as food for the journey , to the dying at any time . On certain occasions, the consecrated host is shown in a monstrance for adoration (exposure of the Holy of Holies, sacramental blessing , Corpus Christi procession ).

According to the Roman Catholic understanding , the validity of the consecration depends on the power of ordination of the celebrant, for whose validity the doctrine of apostolic succession is of decisive importance, i.e. H. the passing on of the office of bishop and thus of the priesthood based on the apostles appointed to this office by Christ . Thus, only one of the Catholic understanding in continuous series ( "consecration line") Payment consecrated can priests (not necessarily a Catholic priest, even Orthodox priests or about to valid ordination to another denomination converted priests being suitable in principle) the conversion within the Eucharist make . The validity of the consecration in no way depends on the faith or the moral disposition of the priest or the recipient of the sacrament ( ex opere operato ). Furthermore, according to Roman Catholic doctrine, a consecration outside the Eucharistic celebration (even by validly ordained priests) is not possible. This means that a change can only take place within the framework of a liturgical celebration corresponding to the basic scheme of the Roman mass celebration, at least in the constituent elements, and with the intention of the church; a magical understanding of the authority to consecrate is therefore excluded.

According to the Lutheran view, at the celebration of the Lord's Supper there is no change of essence (transubstantiation) of the elements bread and wine, but a so-called consubstantiation , which means that bread and wine are preserved, but become “in and under” them ( in et sub pane et vino ) the true body and blood of the Lord consumes. With the consecration, the ordained pastor (priest), who acts in persona Christi according to the confessional view , becomes the bread and body of Christ, wine and blood of Christ into a sacramental unity (doctrine of impanation). In the Lord's Supper, the participants really receive Christ's body and blood with their mouths for the forgiveness of sins. The main focus of Lutheran devotion to the Lord's Supper is on the believing reception of the sacrament (in both forms), without which the Lord's Supper is useless. There is therefore no worship of sacramental figures in Lutheranism. The effectiveness of the consecration is seen as the outflow of the general priesthood of all baptized people and their faith, not (at least not only) the authority of the ordained priest (priest).

The strict Lutheran use of the Lord's Supper has receded in the German-speaking countries in the regional churches and in the Uniate Church, especially since the Leuenberg Agreement stipulates a mediating understanding of the Lord's Supper that leaves little room for maintaining a rite of consecration that emphasizes the belief in the real presence. In the confessional Lutheran churches, e.g. B. the Independent Evangelical Lutheran Church or the Lutheran Church of Missouri , the importance of consecration is still emphasized. The remains (relicta) that remain after the Lord's Supper are also handled very carefully there, in that they are consumed by the pastor at the altar or later in the sacristy .

In the Reformed churches it is emphasized that the community of believers is to be viewed as the true body of Christ, symbolized by the bread and wine in the Lord's Supper. The recitation of the words of Jesus' Lord's Supper is understood in the Reformed area as a remembrance, but not as a consecration that would be accompanied by a special transformation of bread and wine. The real presence in the traditional sense is mostly rejected. While the reformers Zwingli and Karlstadt only assumed a symbolic memory, Calvin assumed a dynamic presence of Christ at the Lord's Supper, which is expressed in the fact that at the moment of receiving communion a power flows down from the transfigured Lord that strengthens the believer.

In the traditional sense, the Orthodox and Ancient Near Eastern churches assume the real presence of the body and blood of Jesus Christ under the forms of bread and wine consecrated in the divine liturgy , but do not commit themselves with regard to the point in time and the manner of transformation . The consecration or sanctification of bread and wine occurs through the liturgy as a whole. According to the orthodox understanding, the change occurs at a moment that cannot be specified, while the priest speaks the Eucharistic prayers about the gifts; it is traditionally seen more with the epiclesis (calling down the Holy Spirit ), which must not be missing, than with the words of institution. The sacred elements are preserved and can be received in the liturgy of the pre-consecrated gifts by the faithful as the body and blood of Christ without renewed change, but sacramental worship is provided only within the divine liturgy and not separately from it.

In the Old Catholic Church as well as in large parts of the Anglican Community , an understanding of the Lord's Supper that is largely identical to that of the Roman Catholic Church is represented. However, the freedom for interpretations and variations of the doctrine of the Lord's Supper is much greater, both in terms of the time and manner of the transformation and the understanding of the real presence and the sacrificial character of the mass , which can in some cases approach Lutheran or Reformed standpoints. The Roman Catholic doctrine of transubstantiation is mostly recognized in the Old Catholic area, often rejected in the Anglican area, but everywhere only viewed as a possible, not necessarily to be assumed, explanation. The change takes place in an unspecified manner with the consecration (recitation of the words of institution) by the priest.

The words of Jesus that he spoke at the last supper (“ initiation report ”) are designated as words of institution or consecration . They are the same in all prayers of the Roman Missal , but are embedded differently in the Lord's Supper account. In the second prayer of the German missal , the installation report reads (the consecration words in capital letters):

According to the letter of October 17, 2006 from Francis Cardinal Arinze , chairman of the Congregation for Divine Worship and the Order of the Sacraments , to the chairmen of the world's bishops' conferences , the pro multis of the Latin missal should in future be transmitted verbatim for many . The episcopal conferences were given a period of up to two years to prepare the faithful for the translation change. In a letter published on April 24, 2012 to the chairman of the German Bishops' Conference, Pope Benedict XVI. agreed with his decision that for reasons of a separation between the translation of the original texts and their interpretation, which is considered necessary, the translation should be used “for many”.

However, in 2001 the Roman Catholic Church recognized the validity of the "Anaphora of the Apostles Addai and Mari", which does not contain any explicit words of change among the non-Uniate Assyrians . This means that for oriental liturgies outside the Roman tradition, an effective consecration is tolerated theologically from an ecumenical point of view, even without words of institution, provided that the consecration is implicitly carried out in the liturgy.

The following wording is usually used in the Protestant churches:

“Our Lord Jesus Christ, on the night that he was betrayed, he took bread, gave thanks and broke it, and gave it to his disciples, and said: Take and eat: This is + my body that is given for you. Do such in my memory. Likewise, he also took the cup after the Lord's Supper, gave thanks and gave it to them, saying, Take it and drink from it, all of you: This is + my blood of the New Testament, which is shed for you for the forgiveness of sins. Do this as often as you drink it in memory of me. "

In the Lutheran churches, especially dogmatic and legally binding in the Independent Evangelical Lutheran Church , the pastor consecrates the words “This is my body” and “This is my blood” (through the sign of the cross). During the recitation, the Lutheran pastor holds his hand over the paten for the bread word and over the chalice during the chalice word. This testifies and makes it clear to the celebrating community ( celebratio coram publico ) that what is on the paten and in the chalice is consecrated, that is, is really the body and blood of Christ. If necessary (the consecrated gifts go out during the Lord's Supper), “consecrated” takes place, that is, the words of the Lord's Supper are repeated over the gifts.

There is a clear difference here between the Lutheran view of the Lord's Supper and other Protestant views, such as B. Zwinglianism , Calvinism and Philippism , as well as other opinions represented today. 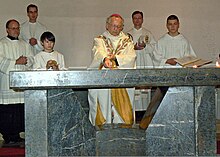 When an altar is consecrated in the Catholic Church, the bishop lights incense grains on it.

Consecration means that a person or thing is withdrawn from worldly "use" and placed in the sole service of God and relates to the actual act of consecration . What these ordinances have in common is that their donation is reserved for the bishop.