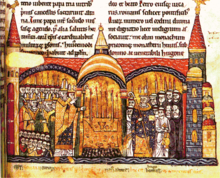 An ordination (from ancient Germanic Weiha- , "holy, consecrated, numinos") is a religious ceremony that can relate to people or things.

In the old religions and natural cults, people with a special religious vocation were consecrated - ( shamans , priests , prophets , kings ). The Catholic , Orthodox and Anglican churches know the sacrament of ordination (episcopal, priestly and deacon ordination), the Christian community the sacrament of priestly ordination .

The Latin language differentiates between ordinatio (sacrament of consecration), consecratio (consecration) and benedictio ( blessing ). The rendering of these terms in German by consecration or blessing is partly inconsistent in church texts and in linguistic usage.

What the terms have in common is that a grace should be conveyed through symbolic actions and usually by saying a prayer of consecration . Consecration means that the consecrated person is no longer intended for normal, profane “use” in the future and in the long term , but for another, religious and symbolic-symbolic use. Someone or something is withdrawn from worldly "use" and placed in the sole service of God. But everyday blessings such as sprinkling with holy water (cf. Asperges ) should also ensure that the life of this person or the normal, profane use of the object is under the blessing of God.

Places or things can be blessed, for example with the consecration of churches , altars , consecration of flags , bells and candles , house blessings , blessings of meals and the blessing of animals . Certain times (the Triduum Sacrum , Holy Week or "Christmas" ) and certain places ( churches , places of pilgrimage ) are called "consecrated".

The term inauguration refers in particular to the solemn form of handing over buildings to the public.

Sacraments of the Catholic and Orthodox Churches

Sacraments of the Christian Community