The title of this article is ambiguous. Further meanings are listed under Abbot (disambiguation) . 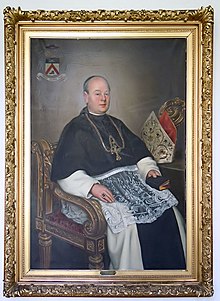 The Cistercian Abbot Thomas Schoen von Bornem (Belgium) (1903): above the habit the prelate's choir clothing , consisting of the Mozetta with pectoral cross , on the hand the abbot ring with the amethyst. In the background his abbot's coat of arms and the other insignia of crook and miter.

Abbot (from late Latin abbas , from aram. Abba “father”, from Hebrew ab ) is a title given to the head of a monastery . Originally, the word Abba ("father"), an honorable address used in a broader sense for every monk, was since the 5th / 6th centuries. In the 19th century, however , the term abbot was reserved for the superior. The female equivalent is the abbess . The office, term of office or the dignity of an abbot is also known as an abbatiat , and a monastery led by an abbot is usually referred to as an abbey .

Above all, monastic orders in the Catholic Church such as the Benedictines and Cistercians have abbots and abbesses. Also Augustinian canons and the Prämonstratenserchorherren know both abbots and provosts .

The equivalent of the office of an abbot in the Orthodox churches or in the Byzantine rite is hegumen or archimandrite .

Maria Magdalena Kollefrath, from 1880 to 1909 abbess of the Cistercian abbey Lichtenthal , in habit with bowl , crook and pectoral cross

Abbots are generally indefinitely elected ; For some time, however, some congregations have established a term of office limited to twelve or at least six years. The constitutions of the individual orders often provide for a resignation from office at the age of 70 or 75. However, an extension of the term of office is possible under certain conditions. Regardless of this, the holder of the office always has the option of resignation , that is, of resigning from office.

The abbot is elected by all professed professes in the monastery who are entitled to vote. In the monastic orders, which are considered clerical associations, only priests are eligible ; the abbots are among the prelates . Regardless of this, the group of those who are considered eligible for office generally only includes members of the Convention from a specified age, whose perpetual profession was at least a certain number of years ago.

The result of the election as abbot or abbess is communicated to the local bishop and the apostolic see as well as the administration of the order. A confirmation of the election by the Pope is only necessary if the newly elected Abbot is also the President of his Congregation , in other cases the Abbot General or Abbot President of the Congregation confirms . The elected abbot then receives the abbot's benediction and the insignia of his office ( crook , ring and pectoral ). The abbot often takes the miter as well.

The Abtsbenediktion , in the church's tradition abbatial blessing or Äbtissinnenweihe called, is the liturgical introduction of an abbot in his new post and to grant the solemn blessing to the person elected. The abbot's benediction is liturgically based on episcopal ordination , but it is a sacramental . The abbot's benediction is usually donated by the responsible local bishop . It does not represent an assignment by the local bishop, but the church blessing for the service of the elected abbot in his community and indirectly for the apostolate exercised by the community in the respective local church and in the universal church. During the Benediction Ceremony, the elected person is given the rule of the order and the official symbols ( staff and ring), and the abbot also receives the miter . The miter has not been given to abbesses for a long time. It is known, however, that the Spanish abbesses of Burgos and Santa María la Real de Las Huelgas , who possessed a great deal of spiritual and secular power, were also given the miter until 1873, and, like the male superiors, they also held the title of prelate . The miter has also been preserved as an insignia of the abbess in some of her coats of arms. 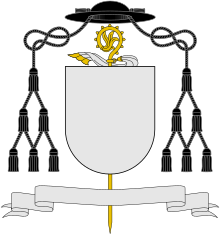 Coat of arms of a Roman Catholic abbot, recognizable by the prelate's hat ( galero ) with twelve tassels ( fiocchi ) hanging down on the side in the color of the order, as well as the crook erected behind the coat of arms 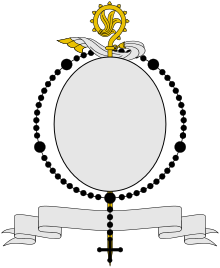 Coat of arms of an abbess

Abbeys are basically exempt and are therefore directly subordinate to the Holy See . The abbots exercise partly paternal authority ( potestas dominativa ), partly jurisdiction. This includes the administration of the monastery property, the management of the monastery and the discipline of the relatives. When selling monastery property, according to canon law , they must obtain the consent of the council. Likewise, the abbot's council must be heard on other important questions, depending on the provision of canon law and the form in the own religious rule, or its consent must be obtained.

Abbots with the Benedictines, the Cistercians and some of the Augustinian and Premonstratensian canons are sovereigns over the abbey and directly subordinate to the Pope. In the Middle Ages, some abbots, as prince abbots, also had secular power and jurisdiction in the abbey's possessions. In special cases, such as the Cistercian Sisters of Las Huelgas or in the Italian San Benedetto in Conversano , the abbess of a monastery also had such quasi-episcopal powers and carried the title of prelate.

From the real, that is the Regularäbten, were once the secular- , Kommendatar- and Laienäbte to distinguish - these were people who the benefice , so the economic income of a monastery occupied, but not to live in the monastery and to conduct the official business. The Commendatarabb was often a secular or layman who was appointed by the respective sovereign . The spiritual direction of the monastery mostly lay with a monk of the monastery, who was often referred to as a prior . Since the Merovingian period , lay people were enfeoffed with abbeys in the Frankish Empire. The custom, which first appeared under Karl Martell , was mostly opposed by the church, but depending on the political power of the respective sovereign, the church sometimes had no choice but to accept this practice. On the basis of a contract concluded between Pope Leo X and King Francis I of France between 1515 and 1521, the King of France had the right to appoint 225 Abbés commendataires , i.e. commendatar abbots, for almost all French abbeys. These received income from a monastery without having to do any service. With the French Revolution and after the secularization in Germany, the practice of awarding this title ceased at the beginning of the 19th century.

In rare cases, the title and the spiritual dignity of an abbot is bestowed by the Pope as an honorary title on religious who do not exercise the office; they are called titular abbots . Although these usually receive the abbot's benediction, they have no power over a convent, but are only endowed with the - above all liturgical - privileges of the abbots.

Deputy of the Abbot

The deputy of an abbot is called the prior and his deputy is the subprior. Prior and subprior, like the other officials, are appointed by the abbot and not elected by the convent .