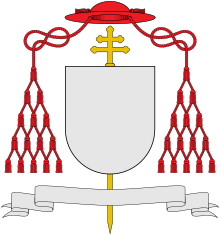 Heraldic ornament of a so-called cardinal archbishop, recognizable by the archbishop's lecture cross behind the heraldic shield and the scarlet cardinal hat with 30 side tassels ( fiocchi )

The Galero (plural Galeri ), also known as the prelate's hat or cardinal's hat , is a large, very flat, scarlet hat with a wide brim for cardinals , from which fifteen tassels ( fiocchi ) hang down on each side . It is the heraldic symbol of cardinal dignity and is also referred to in the broader sense as the green, purple and black flat hat with tassels in the coats of arms of other church dignitaries.

The Galero was created from a flat pilgrim hat with a wide brim, which is used in church heraldry in various colors and different numbers of tassels as a general symbol of dignity for clergy of the Roman Catholic Church .

After the dispute between papacy and empire, Pope Innocent IV fled from Frederick II to Lyon . At Christmas 1245 the Pope put on 13 newly appointed cardinals at the Council of Lyon for the first time a red silk hat. The prelate hats are common from the 13th century. Only since 1833 under the pontificate of Pope Gregory XVI. determine the rank of the dignitary according to a given system. 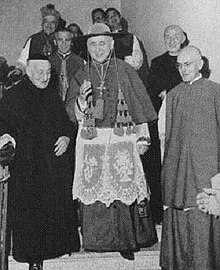 The Milanese Archbishop Giovanni Cardinal Colombo with Galero around 1965

Originally, the Galero was presented to the cardinals when they were solemnly appointed by the Pope. After their death, if these were diocesan bishops, it was hung in their cathedral above their grave and left there until their body had completely turned to dust. It also served as a reminder of the transience of earthly being. In its function as a grave ornament, the Galero is still occasionally used today. The Galero as an actual headdress was created in 1969 by Paul VI. abolished.

The smaller so-called Roman hat ( Cappello romano ) or Saturno is to be distinguished from the Galero, which fulfills no ceremonial tasks, but only practical purposes, for example sun protection. For all clergymen with the exception of the Pope (white or red) it is black with differently colored hat ribbons or cords.

Although the Galero was actually only worn by cardinals, it nevertheless found its way into the heraldry of other church dignitaries. Depending on the rank of the bearer of the coat of arms, it appears as a differently colored hat with a different number of tassels hanging down on the sides, which surround the coat of arms.

The galero in the coat of arms of cardinals is scarlet red with a total of 30 tassels in five rows (1,2,3,4,5), that of patriarchs is green with 30 tassels, and that of archbishops is green with 20 tassels in four rows (1,2 , 3.4). The also green Galero in the coats of arms of bishops and abbots of territorial abbeys , however, only has 6 tassels twice. In addition to red and green, the colors purple for apostolic protonotaries and the honorary prelate of the pope (papal house prelate) and black for abbots, monsignors, the pope's chaplain, vicars general and archbishopric each with twelve tassels in three rows (1,2, 3) used. Canons, cathedral capitulars and canons carry six tassels in two rows (1,2) in the coat of arms, deans, priors and superiors four tassels in two rows (1,1) and priests two tassels in a row to the coats of arms of these ranks in the church Clearly indicate the hierarchy of honor. The de facto rarely used coat of arms of a priest, for example, shows a black galero with two tassels ( fiocchi ) hanging down on the side .

In actual use, the heraldic design is sometimes based on historical, but currently no longer existing conditions: The bishops of Trier , currently Stephan Ackermann , traditionally have 20 tassels in four rows in their coat of arms, as it is a former archdiocese (up to 1801) acts.