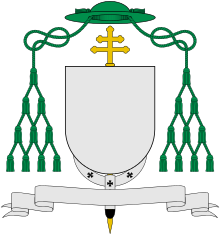 Coat of arms of a Roman Catholic archbishop
(recognizable by the green bishop's hat ( galero ) with twenty tassels of the same color ( fiochi ) hanging down on the sides and the archbishop's cross erected behind the coat of arms. The pallium indicates that this archbishop is also a metropolitan .)

The title archbishop ( arch- from ancient Greek αρχή arché 'beginning', 'leadership', in the derived meaning 'superior', and bishop from επίσκοπος epískopos 'overseer') is borne by bishops with a special position in office. Which bishop may bear the title is regulated differently from church to church. The following cases can be distinguished in the Roman Catholic Church:

According to German protocol, bishops and archbishops are addressed with the address " Your Excellency ".

In the third and fourth centuries, associations of dioceses gradually formed, the head of which was usually referred to as a metropolitan because he was usually the bishop of the capital ( metropolis ) of a Roman province (an exception to this form existed, for example, in the province of Africa ). The First Council of Nicaea mentions that these associations, too , were again grouped into corresponding jurisdictions , namely Alexandria , Antioch , Constantinople and Rome . Together with Jerusalem , these major churches were called patriarchates in the 5th century . The name Archbishop (ἀρχιεπίσκοπος) was first handed down for the Bishop of Alexandria in the 4th century . Archbishop is therefore a title, not an official title - that would be metropolitan . Over time, the title was borne by more and more bishops, while the episcopal heads of the aforementioned ecclesiastical areas were called patriarchs . In the churches with a Byzantine tradition there are still archbishops who are heads of autocephalous - that is, more independent, independent - churches.

The prerogative of the metropolitans or archbishops was always the right to convene provincial synods - that is, bishops' assemblies in his district - as well as the confirmation and sometimes also the appointment of his suffragan bishops . At no time did the metropolitans have the right to rule over the dioceses belonging to their association.

The understanding of the title and its legal form developed differently in the east and west. Since Carolingian times, particularly respected bishops who were not metropolitan were appointed archbishops in the West, partly because of the importance of their diocese, partly because they held a special office, such as that of legate or nuncio .

Archbishops who are metropolitans wear the pallium in the Roman Catholic Church as a sign of participation in the pastoral power of the Pope . In the Eastern Churches, the liturgical garment corresponding to the pallium ( omophorion ) is worn by all bishops.

Archbishops in the Catholic Church

Archbishop Julián Barrio Barrio on a visit to Biberach / Riß on the Way of St. James

Bear the title of Archbishop in the Roman Catholic Church

Archbishop without a metropolitan seat

Titular bishops in a titular diocese with archbishopric rank. These include, above all, Curia officials such as the secretaries of the congregations and the nuncios .

Archbishops in other churches

Archbishops have leadership roles in the Anglican Communion and in the Lutheran churches of Sweden , Estonia , Latvia , Finland and Russia .