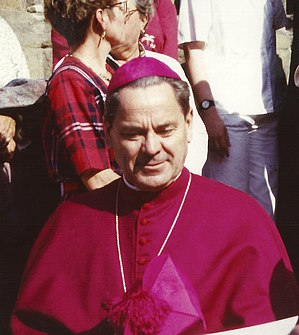 Johannes Dyba (born September 15, 1929 in Berlin , † July 23, 2000 in Fulda ) was a Roman Catholic Archbishop . After serving in the diplomatic service for the Roman Curia, including as Nuncio , he was Bishop of Fulda from 1983 until his death , and from 1990 to July 2000 he was also military bishop of the German Armed Forces .

Johannes Dyba was born as the third of four children of the teacher couple Felix and Johanna Dyba, geb. Brüll, born in Berlin-Wedding and baptized in the parish church of St. Georg in Berlin-Pankow . He attended in Berlin-Tegel , the elementary school and secondary school for boys. In 1941, because of the growing danger of Allied air raids on Berlin, he moved to the secondary school in Heiligenstadt ( Eichsfeld ), where he stayed after various interruptions until he graduated from high school in 1947. After passing the Abitur, he fled across the zone border to Fulda . In Bamberg he studied law and political science at the Philosophical-Theological University . Here he was accepted on May 14, 1949 in the CV of the Catholic German Student Union Fredericia as an original member.

Dyba has been involved in politics since high school. He was a member of the General Student Committee and gave speeches for the newly founded CSU during the 1948 election campaign . As part of the US government's democracy promotion program, Dyba received a scholarship in 1949 to Duke University in Durham in the United States ; In 1950 he moved to the University of Denver .

On his return he enrolled at the University of Heidelberg , where he passed the first state examination in law in 1952 . There he pursued his political interests as a member of the federal executive committee and temporarily as a press officer for the RCDS . He was also a member of the Catholic German Student Union Arminia Heidelberg in the CV .

In the summer of 1953 he entered the Cologne Diocesan Convict Albertinum in Bonn with the aim of becoming a priest and began his theological studies at the university . The following year he was with a study on the impact of war on international treaties at the University of Heidelberg for Doctor of Law doctorate . After completing the study of theology, he was in the 1957 Cologne Seminary added to Bensberg and received on 2 February 1959 in Cologne Cathedral by Cardinal Josef Frings , the ordination .

After a brief pastoral assignment in Cologne-Junkersdorf , he became a chaplain in Wuppertal-Barmen . In September 1960 he was released from service at the Roman Curia , which was to be internationalized in the course of the conciliar aggiornamento . Dyba began studying canonology at the Pontifical Lateran University in Rome and graduated from the Pontifical Diplomatic Academy . In 1962 he finished his canon law studies with a doctorate to Doctor iuris utriusque . His dissertation dealt with the question of the reasons for the unilateral repeal of international treaties and concordats .

As a diplomat of the Holy See, Dyba was initially an attaché in the German-speaking section of the then second section of the State Secretariat and later became its head. On July 1, 1966, Pope Paul VI awarded him . the honorary title of Surplus Secret Chamberlain of His Holiness ( Monsignor ). In the course of the post-conciliar reform of the Curia by Pope Paul VI. Dyba was transferred to the field service: in 1967 he was appointed to the Apostolic Nunciature in Buenos Aires , a year later he moved to The Hague as Secretary of the Embassy . In 1968 he became an official member of the Council of the Roman Curia for External Relations. In the summer of 1972 he was transferred as an auditor to the nunciature in Kinshasa , where he became interim chargé d'affaires in a difficult ecclesiastical situation after the recall of the nuncio . In 1974 he was transferred to Cairo as a Nunciature Councilor . On January 29, 1976 Paul VI awarded him. the title of Honorary Prelate to His Holiness .

After ten years of diplomatic field service, Dyba was recalled to Rome in 1977 and appointed vice-secretary of the Pontifical Commission Iustitia et pax . On August 25, 1979, Pope John Paul II appointed him Apostolic Pronuntius in Liberia and Gambia and Apostolic Delegate for Guinea and Sierra Leone . At the same time he was appointed Titular Archbishop of Neapolis in Proconsulari determined, and on 13 October 1979 he received by Cardinal Secretary of State Agostino Casaroli in Cologne Cathedral , the episcopal ordination ; Co-consecrators were Joseph Cardinal Höffner and Duraisamy Simon Cardinal Lourdusamy (India). His official seat was Monrovia (Liberia).

In 1983 Dyba was elected as his successor by the cathedral chapter after the resignation of the Fulda bishop Eduard Schick . On June 4, 1983, the Pope appointed him Bishop of Fulda while retaining the personal title of Archbishop . He was inducted into office on September 4th. From 1983 to 1989, Dyba headed the working group for the new canon law within the German Bishops' Conference and was a member of the World Church Commission . On November 30, 1990 he was also entrusted with the office of military bishop for the German Armed Forces . In this capacity he was a member of the central office for the military ordinariate in Rome from 1991 to 1999. From 1993 he was also a member of the Roman Congregation for Bishops . In 1994 he was awarded the Great Cross of Merit of the Federal Republic of Germany. On the occasion of his last big sermon for the Boniface Festival 2000 in Fulda, Dyba uttered what is probably his most famous saying:

“So we want to set an example here today; Renew our faith, profess our faithfulness and receive God's blessings! Yes, even more: as sincere believers themselves become a blessing for all wavering and wavering and of little faithful of our time. This is the victory that overcomes the world: Our faith! We now want to let the confession of this faith resound from the Domplatz in Fulda so that it can be heard in heaven and on earth: Credo! Creed! Creed! Amen."

Dyba died of sudden cardiac death in his sleep and was buried in the Johanneskapelle of the cathedral in Fulda .

Dyba was a passionate collector of postcards . After his death, his extensive collection of lithographic German postcards fetched over 500,000 EUR at several auctions between 2001 and 2005.

The four-sided coat of arms shows a black cross in silver in fields 1 and 4, the coat of arms of the diocese of Fulda ( Fürstabtei Fulda ), in field 2 in red three, two to one set, golden crowns, in field 3 in gold a black, red-armored bear .

Behind the shield the double bishop's cross (archbishop) and the crook , above the green galero (bishop's hat ) with ten green tassels (fiocchi) hanging down each. 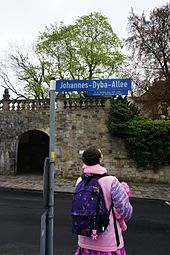 Dyba was considered one of the most conservative representatives of the Catholic Church in Germany within the German Bishops' Conference . In September 1993, his decision to exclude the diocese of Fulda from the state system of pregnancy conflict counseling caused a particular response, also within the Catholic Church . He described the counseling certificate required by law for abortion without punishment as a "license to kill". Dyba was also an uncompromising opponent of the civil partnership law for same-sex couples planned by the red-green federal government . In this context, Dyba described in a guest article for the Spiegel " homosexuality as a degeneration " and added that "imported pleasure boys" had no right to the care of the community. In 1991 he accused the Bund der Deutschen Katholischen Jugend (BDKJ) to consist of "left Greens and church-hostile ideologues", and made efforts by founding its own youth association, the Catholic Youth in the Diocese of Fulda , and by withdrawing funds for the BDKJ in to free the “benevolent forces in the Catholic youth from this mafia” in his diocese.

A former altar boy , his mother and his lawyer accused Dyba of being too lax with clergymen who were suspected of sexually abusing minors .

Dyba's unexpected death met with a lot of media coverage. For example, the Catholic church newspaper wrote for the Archdiocese of Berlin :

“As a native of Berlin, Dyba did not have a teddy bear in his episcopal coat of arms, but a bear and often enough turned out to be one. In the bishops' conference he was considered an ' enfant terrible ' by some who were also happy that he said what they dared not say so clearly; others saw it as the salt in their soup. For the media there was no topic on which they did not want to hear Johannes Dyba next to, and often even in front of, the chairman of the bishops' conference.

Dyba was more present in the media than any other bishop, because other shepherds avoided it. In him, television, radio and newspapers heard not just a voice, but an enthusiastic flesh and blood, an original. A man spoke who had to take some things back and sometimes apologize, but who was also able to do so, and who was forgiven for verbal missteps after his death because one missed not only his clear demeanor, but his person and his Berlin 'heart with a snout'. "

The Frankfurter Allgemeine Zeitung described Dyba in 2010 as follows: "The role of the agent provocateur of the Bishops' Conference and the favorite opponent of the juste milieu in the media and politics filled Dyba alone until his untimely death." In the obituary, Der Spiegel wrote :

“When the Vatican diplomat […] became Bishop of Fulda in 1983, he was already known throughout Europe as an ironic, biting church funder. This line - only the papal word applies - he consistently maintained. With catchy slogans, the native of Berlin put down everything that contradicted old-fashioned Catholic theology and morality in Germany: abortion and counseling, gays and greens, critical theologians and hesitant bishops, self-confident lay people and any attempt at democracy by the church. The shepherd had a kind of love-hate relationship with the mirror. On the one hand, he considered the paper to be 'the devil's press office', and on the 50th anniversary of the Spiegel he congratulated: 'If a benevolent fairy would give me three wishes, one of them would surely be the conversion of Rudolf Augstein.' On the other hand, he used SPIEGEL as a welcome platform whenever the editorial team offered it to him. Only once did he forbid the publication of a conversation he had had about the inconsistencies in his fundamentalism. Reason for the rejection: 'I don't have to be slaughtered voluntarily'. "