The first letter of John is the first of three New Testament letters in the Bible that are ascribed to the evangelist John . 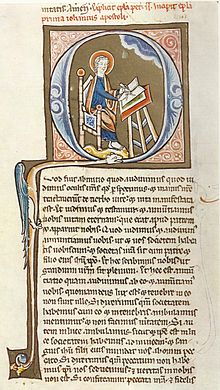 Beginning of the 1st letter of John in a Vulgate manuscript from the 13th century, Stralsund City Archives

The letter, which was probably written at the end of the 1st century, but no later than the year 110, varies above all the subject of right faith and a life to be developed from it, for which love is again decisive. The metaphor of light suggests the Johannine origin, which, according to Bultmann , can be explained in the Gnostic tendency - or model - of Johannes. On the other hand, in 1 John 1.5  ELB God is equated with light, but in John 8.12  ELB Christ is described in such a way, which perhaps indicates a ' Johannine school ', but different authors of the letter (s) and the Gospel. Overall, however, the first letter of John was meant as a letter of warning (cf. 1 John 2: 18f.  ELB ; 1 John 2:26  ELB ; 1 John 3 : 7  ELB ), which opposes the denial of the divinity of the Son and himself thereby directed against demiurgic or subordinate ideas: Perhaps this was the so-called heresy of Kerinth , active in Asia Minor , or of an offshoot, even if the typical Kerinthian views are missing.

A text-critical feature in the first letter of John is the so-called "Comma Johanneum". It is an addendum to 1 John 5.7 to 8  ELB (quoted by the unit translation and its footnotes; italics the words of the Comma ):

Many interpreters assume that this is a dogmatically motivated addition that is intended to emphasize the doctrine of the Trinity in the Bible.

This addition is not found in any Latin manuscript before the 6th century or in any Greek manuscript before the 14th century. In 1592 the "Comma Johanneum" was included in the official Vulgate edition "Sixto-Clementina". The humanist Erasmus has included the “comma” in his Textus Receptus from the third edition . Today it can be found neither in the so-called Nova Vulgata nor in the edition of the Novum Testamentum Graece by Nestle-Aland.