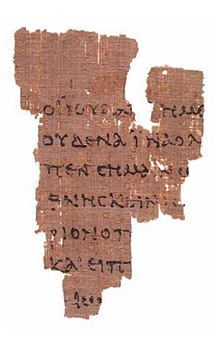 The term gospel comes from ancient Greek ( εὐαγγέλιον euangélion ) and means “good news” or “ good news ”. The gospels usually refer to the four gospels according to Matthew , Mark , Luke and John in the New Testament of the Bible . In addition, other Gospels have come down that do not belong to the biblical canon and are counted among the New Testament Apocrypha .

The authors of the four Gospels are also known as evangelists .

In the Greek translation of the Old Testament , the Septuagint , the term evangelion is found several times in scenes in which news of a military victory is brought to a king. In post-exilic Judaism , the gospel primarily meant the message of salvation announced by the prophet Isaiah (40.9–12 EU ).

In the Imperium Romanum , this term was used to describe news from the imperial family that was considered “good news”. The oldest evidence can be found in the stone "Calendar Inscription of Priene " (dated 9 BC), which says about the birthday of the deified emperor Augustus (23 September 63 BC):

In Mark 1,1 EU the term has a contrasting meaning when applied to Jesus of Nazareth . It describes the good news of the salvation happening in Jesus Christ . Originally, this good news is not something fixed in writing, but an oral proclamation.

Some Church Fathers called the entire New Testament the gospel . The name gospel in connection with the canonical gospel scriptures can be found in the church father Irenaeus : The gospel as the one message of Jesus Christ in four forms - according to or according to Matthew, Mark, Luke and John. The church father Justinus uses the term in both meanings.

According to the general consensus of biblical scholars, the original language of all four New Testament Gospels is Greek . The author's information (such as “Gospel according to Matthew” etc.) do not belong to the original text of the Gospels, but were added early and are consistent throughout the tradition. It is incomprehensible whether the names are actually the original names of the authors, or whether these names were secondary to an author who is not known by name.

The time of origin of the New Testament Gospels lies between 30 or 33 AD (the year of Jesus' crucifixion) and around 120 AD (evidence from the early 2nd century: The Papyrus 52 ( 52 ), a fragment of the Gospel of John from that time Emperor Hadrian and Church Fathers - Quotes). In theological research hardly anyone advocates the “early dating” of a gospel to the 1930s, but the thesis of a primordial gospel has existed since ancient times . The discussions move in the area of ​​tension between a "middle dating" of the Gospels around AD 60 and a "late dating" around AD 85.

In spite of the only brief public activity of Jesus, there are more chronologically closer biographical accounts of him than of most ancient personalities, e.g. B. the earliest surviving biography of Augustus was written by Suetonius a century after his death , and about Mohammed two centuries after his death by Ibn Hisham .

The following criteria are used to determine when the Gospels were written: Stylistic peculiarities, reciprocal references between the texts, theological differences and references to historical facts. The following table shows some attempts at dating:

Although the first three Gospels report many incidents in a similar manner, and the content of the shorter Gospel of Mark is largely contained in the longer Gospels according to Matthew and Luke, all four Gospels have been retained for ecclesiastical use. It was neither z. For example, the Gospel of Mark was omitted, nor was a Gospel Harmony (i.e., a continuous narrative compiled from the four Gospels) in the place of the Gospels (the Gospel harmony created by Tatian was popular in the Syrian Church, but did not supplant the original Gospels). The emerging major church decided to include these four Gospels used in the Christian communities separately in the New Testament canon . (See also New Testament Apocrypha .)

In addition to the four mentioned gospels, many pseudepigraphic gospels were circulating from the 2nd century onwards , which are later not included in the canon and are called apocryphal gospels. Of them are u. a. handed down the Gospel of Thomas , the Gospel of Peter , the Gospel of Judas , the Gospel of Truth and the Gospel of Philip . Of these Gospels are e.g. In some cases only fragments or quotations have been received from church fathers.