Justin the Martyr. Historicizing, fictional icon of the 16th century

Justin , called the martyr , also the philosopher ( ancient Greek Ἰουστῖνος ὁ Μάρτυρ Iustínos ho Mártyr , Latin Iustinus Martyr ; * around 100 in the province of Palestine ; † 165 in Rome ), was a Christian martyr and church father and philosopher . 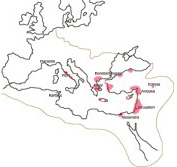 The early spread of Christianity (centers = dark pink). Areas of Christian communities around the year 100 AD.

Justin was a 2nd century Doctor of the Church who is ranked among the Apologists . His view is influenced by Platonism and is considered to be the beginning of the adaptation of Greek philosophy in Christianity (although the Gospel of John, which is based on the Logos idea, points in this direction). In search of the truth, he became familiar with several philosophical directions ( Stoics , Peripatetics and Pythagoreans ). As a Platonist, he pondered the question of God and became aware of the prophets. So he finally converted to Christianity, the "only reliable and useful philosophy".

Justin, the son of a Priscus is called and grandson of a Baccheios, a musician, was probably in Machusa at Shechem in Palestine born (that after its destruction by Vespasian then Flavia Neapolis was said today Arabized Nablus ) and grew up in more affluent circumstances . In his apology he introduced himself as Justinos, son of Priscus, son of Bacheios, from Flavia Neapolis, in Syria Galilee . He came from a pagan family and was interested in philosophy from an early age. In Nablus he went to the school of a stoic, a peripatetic and finally a platonic. Later he turned to Christianity , possibly in Ephesus , settled in Rome and founded a school of philosophy there. In Rome he got into a dispute with the Cynical philosopher Crescens and was reportedly reported by him or one of his followers because of his teachings. According to other sources, Justin was said to have been betrayed by one of his own students.

Justin was arrested with six other Christians during the reign of the emperor Marc Aurel , in the following process as their spokesman and finally sentenced and executed.

Only three of his many writings have survived. On the one hand, the dialogue with the Jew Tryphon has been preserved, which in the form of the Platonic dialogues reproduces the search of the former pagan and is an important testimony to the early Christian conflict with Judaism ; On the other hand two (as perhaps the dialogue ) to Antoninus Pius directed apologies , in part, forensically -sounding, but persistent in tone and content of rhetoric looking to defend against their opponents as well as the usual prejudices the cause of Christianity.

In addition to the inclusion of philosophy in Christianity, Justin is also associated with the interpretation of the biblical scriptures , especially the Old Testament . In Justin the clear option of the early Church manifests itself for a philosophy purified from the pagan myths and cults of gods as well as from the cultural customs of the time in order to give priority to the truth of being. In this optics, philosophy represents a preferred place of encounter between paganism, Judaism and Christianity and also the introduction to Jesus Christ . Justin is said to have carried out the scriptural evidence up to the extensive collection of references and their cataloging. The emerging interest thereon would also the end of an imminent end of the early Christian express community and the beginning of "Verkirchlichung". A theological doctrine or dogmatics in the narrower sense is not handed down from Justin.

The Catholic Church venerates Justin as a saint and patron of philosophers. His (Protestant, Anglican, Roman Catholic, Orthodox and Armenian) memorial day is June 1st . 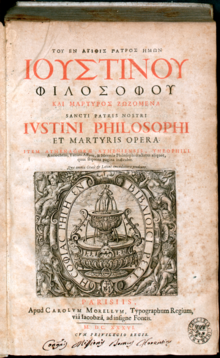