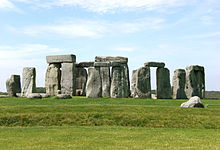 Stonehenge , a "pagan" place of worship in England

Paganism or Paganism (from Latin paganus "pagan."; Cf. Latin pagus "village") refers to the history of religion from a Christian perspective the state is not one of the monotheistic religions to belong. Based on historical texts from antiquity and the Middle Ages , these are differentiated in Europe and the Middle East from Christians , Muslims , Jews , Zoroastrians and Manichaeans . In the primary literature of these epochs, its use is often pejorative ( pejorative ) due to the claim to religious exclusivity . In the more recent research literature , paganism / pagan and pagan / pagan cults - based on antiquity and the Middle Ages - are used in a value-neutral manner, in order to distinguish the followers of various gods from Christians, Jews, Zoroastrians and Manicheans.

The negative connotation of the term paganism , however, has barely survived in today's linguistic usage due to continued religious influences. In the modern age, the term heath is mostly no longer used for atheists , agnostics or minority religions. However , it is used again as a self-designation by followers of neo-pagan movements.

On atlas maps of the 19th century a use as a synonym for “ tribal religions ” can be seen.

At the time of early Christianity, which differentiated itself from an inner-Jewish sect, Jewish Christianity , into Gentile Christianity , the deviants and followers of Pauline theology and mission were, comparable to themselves, regarded as a kind of Gentiles . Later, within early medieval Christianity, the term initially served as a simple distinguishing feature between the Jewish Christians converted from Judaism and the non-Jewish Gentile Christians. From the point of view of monotheistic , missionary religions, it has been used since the European Middle Ages in a derogatory way for religious opponents outside of their own tradition .

Christianity in particular used the term as a term for all unbelievers. Some also referred to the Jewish religion as pagan , in deviation from common usage .

In the concrete Christian missionary debate, the term can be proven very early on, especially in the Nordic cultures, as a delimiting self-designation (see etymology).

Paganism can also mean the revival of old religions in the present as a self-denomination and an external label. In this case, the term is used synonymously with the more precise Neopaganism (neo-paganism).

Comparably, the Jewish tradition has the delimiting, non-pejorative Hebrew term goi (“from the peoples”), which means, for example, non-Jew or foreigner. The Islamic tradition has similarly denoted the delimiting, but clearly pejorative and discriminatory, Arabic-Islamic legal term kāfir , the “ unbeliever ” or “denier of God”.

There are various theories about the etymology of the word Heide (from Middle High German pagans , from Old High German heidano "non-Christian").

The underlying Germanic developments heina, haiþina are classified as very old formations. In the past, the word was considered a loan translation to Latin paganus . However, this word did not appear until the second half of the 4th century (as pagani in the meaning of "pagans"), when the suffix -ina was no longer used, and goes back to the Latin word pagus , which also means Gau and Heim and simply referred to the country people or the villagers.

In 1949, Jost Trier identified the “heath” as a commons and etymologically linked it with heimr “world, home”. So he comes to the meaning of "heiðinn" as "belonging to one's own local cult community".

A widespread derivation, however, was linked to the Greek word ἔθνος (éthnos) by the Indo-Germanist Wilhelm Schulze in 1909. Accordingly, the Greek term tá éthnē ( τα ἔθνη , "the peoples") was originally used by Jews for non-Jews. Later the meaning was taken over by the Christians and, like the Latin gentiles and the late Latin word pagani, denoted the non-Christians. The term with the initial h- aspirated in late Greek (as well as hethanos in Armenian) was borrowed from the Gothic, where it is still a Greek, i.e. non-Jewish, as haiþno (“pagan”, pronounced häþno ) in the New Testament (Mark 7:26) , designated. From there the term may have come to the West Germans with Gothic missionary efforts. It is believed that the word was based on the Gothic haiþi ("field, field") and associated with the Latin paganus ("heather", literally "country dweller"), so that it appears as heidan in Old High German .

Initially, "Heiðinn" was a term taken from Christians , but not a pejorative term for North Germanic non-Christians. The skald Eyvindr skáldaspillir (around 920-990) wrote (see for pronunciation Icelandic phonology ):

In the Christian tradition, the term pagan is used as a collective term for the other, i.e. those who are outside of their own Christian- Trinitarian traditions. The term originally served as a polemical category to devalue the other who is denied belonging to a religion. Closely related to this is the idea of false religion . Therefore, depending on the context, heathen and paganism can have different meanings. At times, all others outside of Christianity were named as pagans ; in the course of the Reformation and confessionalization , the other denomination (or origin) was also designated as pagan. The semantic content of the Germanic word Heide overlaps with the meaning of the Latin paganus , the country dweller, who is in conceptual contrast to the city dweller.

See also : Persecution of the Gentiles

In Jewish scriptures, a distinction is made between the people of Israel and the Goyim on the one hand , which was translated in the Septuagint with ΕΘΝΟΣ ( ethnos = "people"), in the Vulgate with gentes (= "tribes, peoples"), but on the other hand both expressions are also used often used (e.g. Genesis 35.11  EU ) as a self-designation. This ambivalence in use can still be found in the New Testament , but mostly the supporters of Greek and Roman polytheism are meant, in some cases also the non-Jews who have converted to Christianity. A distinction is made between Jewish Christians (Jews converted to Christianity) and Gentile Christians (adherents of other religions who have converted to Christianity or those without religion). Paul called himself an apostle of the Gentiles (nations) because he saw himself commissioned to teach and preach non-Israelites.

Traditionally, the pagans (pagans) were generally regarded and treated as unbelievers by the followers of monotheistic religions .

The Jewish , Christian and Islamic rejection of paganism was primarily directed against Greek and Roman polytheism, and in the course of the mission also against Germanic , Celtic , Slavic , Baltic and Indian paganism.

The end of classical paganism can therefore be seen as the development or introduction of Christianity or Islam as a popular or state religion , without prejudice to the forms of syncretism that arose in the regional transition periods, i.e. the mixture of religious-cultic tradition and accommodated Christian content, Rites and cults.

Although (after which Christianity in the late 4th century Constantinian shift in the early 4th century) as the state religion of the Roman Empire was being tempted in the following years, many pagan suppress customs or to Christianity, still all be late antiquity through pagan or at least find syncretistic beliefs and practices. Around 400, however, the number of followers of Pagan cults decreased noticeably, especially since Christians also emphasized cultural traditions (such as classical education).

Later, in Christianity, paganism was localized outside of one's own culture, often classified as superstition or seen as the goal of proselytizing, although the compulsory Christianization was officially rejected and also by various Christian scholars in the Middle Ages.

The Islam also differed from the outset between the People of the Book (Christians and Jews) and the infidels to be evangelized. Followers of polytheistic religions still have no legal status under Sharia law and enjoy no protection. Remnants of Arab paganism can still be found at the beginning of the 20th century, for example in the form of the worship of Dhū l-Chalasa .

In contrast, within Christianity, the term pagan during the Crusades concentrated almost exclusively on the Muslim Saracens . Only in the course of the mission to the rediscovered or newly discovered continents of Africa, America and Asia was it again broadly defined in the sense of the new land, pioneer or pagan mission . Today the term is hardly used in the context of evangelization and inculturation of most Christian denominations; rather, the members of the newly burgeoning polytheistic currents today describe themselves as pagans without seeing this as a form of disdain.

Due to the Christian tradition in the German-speaking area, the term “Heide” has a negative connotation. On the other hand, there is the positive use by neo-paganism (neo-paganism): Although this esoteric - neo-religious movement has a multitude of different and independent - often polytheistic - directions, its followers often consciously refer to themselves as pagans in order to use their common, religious group identity as an antipole to the Christian-Jewish tradition and also to all world religions and the " convinced unbelief ".

The neo-pagan movement has enjoyed considerable popularity since environmental social criticism in the 1970s. Ecology , holism and spirituality play a central role everywhere . Mostly by way of individual "expansion of consciousness" one would like to arrive at a way of life or at least a worldview "in harmony with nature".

Since there are almost no historical records from the time of pre-Christian Europe, neo-pagans refer, among other things, to Nordic and Celtic fairy tales and sagas as well as to the traditions and exotic rituals of the so-called " natural religions ". Asian, Indian and Celtic elements in particular are taken up and - regardless of the historical or geographical context - adapted to one's own ideas. The flood of publications and courses enables open-minded people to consume a multitude of neo-pagan ideas, to put them together individually and to change them. There are also a number of representatives of indigenous groups in the scene who sell their “archaic knowledge” profitably to new pagans. Many of these neo-shamans are not recognized as religious authorities in their homeland and, in North America, for example, are disparagingly labeled plastic shamans . In addition, their knowledge of their own traditions is incomplete in the course of the often compulsory Christian proselytizing , so that they often build on more recent developments (see peyote religion ), which, however, are already syncretistic mixed religions made up of various ethnic and Christian elements.

The number of adherents of neo-pagan world views is difficult to determine statistically, as these are often not grouped together in large organizations. The estimates are at several million worldwide. According to different estimates of several 1,000 with up to 100,000 followers in Germany, Wicca and related movements are the largest neo-pagan movement. By 1990, the number of Wiccans was estimated at more than 200,000 in the US, 30,000 in the UK, and 800,000 worldwide.

See also the various essays in the Rise and Fall of the Roman World or the Cambridge Ancient History and the New Cambridge Medieval History .