from Wikipedia, the free encyclopedia
This is the spotted version , flagged on May 2nd, 2020 . There is 1 pending change that has yet to be viewed.

State religion (also official religion ) is a religion preferred by a state over other religions . In Europe, after the beginning of the Reformation at the beginning of the 16th century and wars between Protestants and Catholics in the Augsburg religious peace, the principle of Cuius regio, eius religio applied .

State religions (or in Europe also known as state churches ) are linked to or dependent on the state to varying degrees. The state identifies itself with a religion and recognizes it as “its” religion.

The weakest form of a state religion is the naming of the religious affiliation of the population, such as the French constitution of 1830 with its determination of the predominantly Roman Catholic religious affiliation of the French. In countries with Christian Orthodox national churches there is a high, historically grown identification of society with the local churches. This in fact sometimes results in close relationships and also support from the state, without the national churches being specifically designated as state churches in the constitutions.

A low level is given if the state institutionally prefers a religion, but at the same time guarantees unrestricted individual religious freedom. Examples of this are currently England and Denmark in particular , Sweden up to 2000 and Norway up to 2012 . In these states, the Anglican or Lutheran Church is / was part of the state and was also controlled by the state. The Queen of Great Britain is also the head of the Anglican Church of England (" Fidei defensor "), and the Queen of Denmark is also the head of the Lutheran Church of Denmark. Internal church decisions are made in the form of state laws, the churches are part of the state to grant z. B. bound by freedom of belief. From these examples it can be seen that a state religion does not necessarily mean a lack of individual freedom of religion or belief.

The status as a state religion is usually accompanied by a financial preference for the relevant religious community.

In some Islamic countries, the connection between the state and religion is more extensive, in that the basis of the community is the religious rules of a current of Islam . The identification of content with a religion goes hand in hand with the persecution of people of different faiths, and in particular those who have fallen away from the state religion. Examples of this are Yemen and, in particular, Saudi Arabia . The state also has the task of protecting and preserving the “true” religion, and thus ensuring the cohesion of society and domestic political stability. 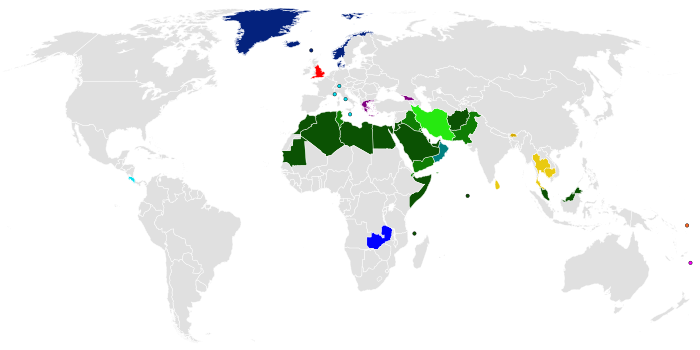