The Hanafi school of law has been predominant in Sunni Islam since the end of the Umayyad period : it is the most widespread school of law, followed by around half of the Sunnis . As a rule, they are followers of the Maturidiyya movement in the theological field .

The Hanafi school of law had spread first in the area of ​​Iraq - the sphere of activity of Abu Hanifa - but then also in the area of ​​ancient Syria ( Arabic الشام asch-Shām , called DMG aš-Šām ), which extended further than today's Syria . Since the time of the Seljuks , the Hanafi school of law waspreferred by the statein the Syrian and Anatolian areas (today's Turkey ). Since the Maliki law school was not at all represented in these areas and the other law schools were not well represented, this support gave the Hanafis a strong boost and ensured widespread use among the population.

In the Ottoman Empire , finally, the Hanafi school was the "Constitutional Law School" raised, that is to that law school was tuned to the all-in state and society. The Ottoman nickname "legislator" ( Kanuni ) received Suleiman when he under the Chief Mufti Mehmet Abu Saud Efendi was create (Mehmet Ebussuud Efendi) guidelines on how the Sharia and the principle, to ban the right to command and what is wrong , in the practice of state reality should be implemented. In the Ottoman Empire, the government set up a mufti for each province ( Eyâlet ) .

The situation was similar in the Mughal Empire , especially under the rule of the devout Muhammad Aurangzeb Alamgir . He insisted on strict observance of the laws of the Koran, particularly the moral laws. More important, however, were the attempts to enforce Hanafi law in public. Aurangzeb had an extensive and still significant collection of Hanafi laws ( fatawa-i alamgiri / Fataawa al Hindiyya ) created to support Islamic jurisprudence and, according to Islamic legal understanding , abolished inadmissible taxes. About 500 legal scholars worked on this set of laws. In return, Aurangzeb had the jizya recovered (from 1679); Hindus also had to pay customs duties twice as high as Muslims. In addition, Aurangzeb's measures to Islamize the empire affected not only those of different faiths, but also Muslims who deviated from the commandments of the Hanafis. However, the collection of legal questions was not fully completed until after Aurangzeb's death.

For a long time there was a provision in the Criminal Code of Egypt according to which a death sentence passed by the civil court - and no longer by the Shari'a Court - only became final with the consent of the mufti and taking into account the legal teachings of the Hanafis.

The Hanafi school of law is therefore widespread today in all successor states of the Ottoman Empire. They make up the majority among all those Sunnis who belong to the Turkic peoples (including the Turks themselves), as well as among the Sunnis of the Asian mainland east of Iran, i.e. in Afghanistan , Pakistan , Turkmenistan , India , China , Uzbekistan , Kazakhstan , as well as in South Africa . The Sunni minority in Iran is also largely Hanafi.

They also make up the majority among the Sunnis in Iraq , Jordan and Lebanon . There are larger Hanafi minorities in Syria, Egypt and Palestine . The Hanafi school of law is also predominant in the European areas where Muslims have lived since the time of the Ottoman Empire, i.e. in the Balkans , especially Bosnia , Sandžak , Albania , Kosovo , North Macedonia , Romania , Serbia , Bulgaria and Greece .

Sources and methods of legal finding

The main sources recognized by the Hanafi school of law are (in descending order): Quran , Sunna , Ijma , Qiyas and the Ra'y ( istihsan )

Here, Qiyas and Istihsan took the early form of Hanafiya opposite as two contrasting solutions, of which the mujtahid selects the one that seems to him better because of his knowledge and experience:

The strong emphasis on qiyas and istihsan in the early years of the Hanafis was so important because in the time of Abu Hanifa too many weak and forged hadiths were in circulation and there was no real system for determining the correct one ( saheeh ) among them.

As a result, the law school used more sources during Abu Hanifa's lifetime than after his death. After his death, Abu Hanifa's main pupil, the scholars Abu Yusuf and Muhammad asch-Schaibani ( the two imams ) had a decisive influence on the further development of the school of law. Another influential disciple of Abu Hanifa was Zufar ibn al-Hudhail .

Unlike Abu Hanifa, Abu Yusuf and Muhammad ash-Shaybani went more into the hadith basis. This was made possible by the fact that there was now a catalog of hadiths recognized as “real” ( sahih ). On this basis, they revised and replaced many of Abu Hanifa's decisions. Today's Hanafi school of law therefore follows the opinion of Abu Yusuf and ash-Shaybani on many issues and not the original opinion of Abu Hanifa. Today the Istihsan is no longer used in the form in which Abu Hanifa used it. Also is Ra'y (freedom of expression of the mujtahid who is not dependent on direct evidence from legal sources) now very rarely used. 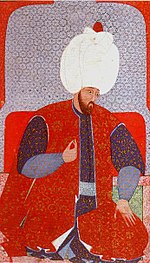 The "legislative" Sultan Suleyman I, who fundamentally canonized the legal system in the Ottoman Empire on Hanafi law.

In particular, Muhammad asch-Shaybani gave the hadith as a source of jurisprudence, a priority over the ra'y in finding the law, and thus differed from the methodology of his teacher Abu Hanifa. His al-Jāmiʿ al-kabīr  /الجامع الكبير / al-Ǧāmiʿ al-kabīr  / 'The great summary (work)' deals with the derived legal clauses of Islamic jurisprudence (furūʿ) and has since been commented on several times, discussed within the law school and used as teaching material. It handles a large number of legal cases with concise decisions. Comments and abstracts of the work are available in later revisions. The judges had to know the 1532 legal clauses by heart when issuing and notarizing their decisions and used them accordingly.

A peculiarity of the Hanafi madhhab in the area of ​​purity regulations is that running water must be used for the ablutions before the prayer, because this alone is regarded as ritually cleansing. This is where the Hanafis differ in particular from the Shafiites , who accept stagnant water as pure if it has a certain minimum volume. Here they refer to a prophetic word , according to which water, if it has the volume of two vessels (qulla), does not absorb any impurity. In contrast, the Hanafis reject this hadith as inauthentic. The Arabic name Ḥanafīya for water tap is also traced back to the need for the Hanafis to clean themselves with running water before praying.

The Hanafi is the only one of the four Sunni schools of law to determine the circumstances under which an area belonging to the House of War ( Dār al-Harb ) becomes a part of the House of Islam ( Dār al-Islām or: Dār as-Salām ) and vice versa. The term does not appear in the Koran, but goes back to Abu Hanifa . In contrast to the other schools of law, the Hanafi judgment does not temporarily limit a peace treaty ( Hudna ).

According to generally accepted regulations, an area becomes the House of Islam if it is under Islamic rule and Islamic law, the Sharia , is applied there. With regard to when an area previously belonging to the House of Islam is to be considered part of the House of War , Abu Hanifa set the following conditions, which still dominate the law school to this day:

These conditions can be met if part of the House of Islam is conquered or a group of dhimmis cancels their contract with the Muslims.

The principle was applied in the Hanafi-influenced states of the Abbasids , Mamluks , Seljuks , in the Mughal Empire especially under Aurangzeb and under the Ottomans.

The Ottoman Empire , which was primarily a military state from the beginning, with the aim of expanding the "Empire of Islam" ( Dār al-Islām ) by conquering territories of deviating beliefs ( Dār al-Harb ), acted and justified this principle up to the Tanzimat . According to critics, the Dar al Harb was subject to the legal fiction in the Ottoman Empire that the state of war with the subjugated had not yet ended. Therefore the state of war, the jihad , was perpetuated , whereby the continued existence of the population is left to the discretion of the respective ruler.

In the area of ​​criminal law, a specialty of the Hanafis is that they time-limit the prosecution of Hadd offenses . With the exception of libel for fornication ( qadhf ), according to their teaching, Hadd offenses can no longer be punished after one month has passed. They also like to make use of the concept of "appearance" ( šubha ) to avert Hadd punishments. For example, in the event that a couple who had committed zinā could assume that a legal marriage had taken place between them, the hadd penalty is averted by the concept of "appearance of a contract" ( šubhat al-ʿaqd ). In the case of theft ( sariqa ), the minimum value ( niṣāb ) that the stolen property must have for a hadd offense is 29.7 grams of silver, which is much higher than the other law schools (8.91 grams of silver).

Recognition as a religious community in Austria

The Hanafis were legally recognized in Austria on the basis of the law of July 15, 1912 regarding the recognition of followers of Islam according to the Hanafi rite as a religious society ( RGBl. No. 159/1912). Since then, Hanafi Islam has been one of the recognized religious communities in Austria and is placed on a par with the Christian churches and the Jewish communities . The law came into force on August 10, 1912. The Islam Law confirms and strengthens the state recognition of Islam as a religion by Austria , which has existed since 1874 . In Europe at that time Austria was a leader in relation to Islam.

Emperor Franz Joseph drew the consequences of his expansion policy with the Islam law : in 1878 the Habsburg monarchy had actually annexed Bosnia-Herzegovina ( formal annexation only in 1908) - and thereby made a large number of Muslims citizens of the monarchy.

Emperor Franz Joseph also approved the construction of a mosque in Vienna and donated 250,000 gold crowns . Vienna's mayor Karl Lueger provided a plot of land on Laaer Berg for this purpose . However, the First World War prevented the mosque from being built. After the collapse of the dual monarchy, only a few Muslims remained in Austria (fewer than 1,000).

With effect from March 24, 1988, the phrase “according to the Hanafi rite” in Article 1 and in Sections 5 and 6 was repealed as unconstitutional in the Islamic Law, thus extending the validity of the law to all Muslims. Since then, the long title of the law has been "Law of July 15, 1912, regarding the recognition of followers of Islam as a religious society " (cf. Federal Law Gazette No. 164/1988).