from Wikipedia, the free encyclopedia
This is the spotted version , flagged on May 15, 2020 . There is 1 pending change that has yet to be viewed. 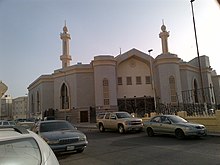 Ibn Hanbal's family came from Basra and later moved to Merw . His father, a member of the Arab tribe Banu Shayban of the Rabīʿa , served in the Abbasid army in Khorasan and settled with his family in Baghdad. Ibn Hanbal studied regularly with Huschaim b. Bashir and with Sufyan ibn ʿUyaina. Ibn Hanbal is also said to have attended the lessons of the Hanafi Kadis Abū Yūsuf († 798), who was a student of Abū Ḥanīfa. Abū Yūsuf had little influence on Ibn Hanbal. To say that Ibn Hanbal was also said to have been a disciple of Muhammad ibn Idrīs al-Shāfidī is an exaggeration. Ibn Hanbal probably met al-Shafid only once in 810 in Baghdad.

In 795 Ahmad went on extensive study trips that took him to Syria , Yemen , Khorasan , Mecca and Medina . Several authorities of the hadith literature of the early 9th century had a great influence on his education, among them Sufyan ibn ʿUyaina († 811) in Mecca, Abd al-Rahman ibn Mahdi († 813) in Basra and Waki 'ibn al- Jarrah († 812) in Kufa , the then undisputed representatives of the Ashāb al-hadīth .

Ahmad's closeness to theology determined his fate during the Mihna , when al-Mamun declared the Jahmitic doctrine of the composition of the Koran to be state doctrine. In September 834 he and other representatives of the ahl al-sunna had to appear at the caliph's court and submit to the Mihna. He was flogged, imprisoned and placed under house arrest. Only under al-Mutawakkil ʿalā Llāh (from 847) could he teach undisturbed and appear in public. Eight years later he died in Baghdad after a brief illness.

His son Salih has his father's life under the title سيرة أحمد بن حنبل / Sīrat Aḥmad b. Ḥanbal  / 'The biography of Ahmad ibn Hanbal' summarized. The book first appeared in print in 1995 in Riyadh .

The legal questions from Abū Dāwūd al-Siǧistānī to Ibn Ḥanbal. One of the oldest literary manuscripts in the Islamic world, produced in Rabīʿ I. 266 (October 879)

Ahmad ibn Hanbal endeavored to derive all laws from the Koran , the Sunna and the consensus ( idschmāʿ ) of the first generations. The sources of fiqh defined by ash-Shāfiʿī - the conclusion by analogy ( qiyās ) and the independent doctrinal opinion ( ra'y ) lost their importance for him. This is primarily due to the fact that Ahmad ibn Hanbal was more in circles of hadith scholars than in those of jurists. In contrast to Ash-Shāfidī, Ahmad did not consider an uninterrupted chain of trades right up to the Prophet to be necessary for hadiths ; he also invoked mursal traditions.

On the theological level, Ahmad ibn Hanbal represented anthropomorphic teachings (tašbīh). He affirmed that God has a human form with a face, eyes, hair, voice, breath, hands, fingers, feet, and even loins. While anthropomorphic ideas about God were widespread among Muslim scholars in his day, they were later viewed as false teachings in Sunni Islam. The Hanbalites also turned away from these teachings. Ibn al-Dschauzī (d. 1200) tried in his work Dafʿ šubhat at-tašbīh bi-akuff at-tanzīh (" Avoidance of the suspicion of anthropomorphism with the means of transcendentalism") to provide evidence that Hanbali scholars who continue to be anthropomorphic Doctrines represented, could not rely on their law school founder. The Kitāb Dafʿ šubah min šabbah wa-tamarrad wa-nasab ḏalik ilā al-imām Aḥmad ("Book to avert the pseudo arguments of those who insolently compare God with man and ascribe this to Imam Ahmad") had a similar intention Syrian scholar Taqī ad-Dīn al-Hisnī († 1426).