Region (brown) in which the Zaidis make up the majority

The Zaidites ( Arabic زيدية, DMG Zaidīya ) form a branch of the Shiites within Islam . They are named after Zaid ibn ʿAlī , a grandson of the prophet's grandson Husain , who rose against the rule of the Umayyads in 740 in Kufa and was killed in the process. The Zaidis have their own law school and have been rooted in Yemen since the 9th century , where their imams ruled an independent principality until 1962. The Sherif of Mecca were also Zaidites until the 14th century.

The Zaidites are sometimes also called "five Shiites" , but this term is misleading because, unlike the twelve Shiites, the number of imams in the Zaidites is not limited to a certain number. This term is not used in the scientific literature on Schia.

One of the most important characteristics of the Zaidis is their political theory, according to which the Imamat , the leadership of the Islamic community, is reserved exclusively for the descendants of Mohammed through his grandsons Hasan and Husain (most of the Zaidite imams were Hasanids ). They differ from the Sunnis in the narrow limitation to this group of people . According to Zaid ibn Ali, however, the Zaidites do not know a uniform, fixed imam series, the imam must rather assert himself with force of arms and thereby distinguish himself through certain qualities: In addition to the descent, he must be able to demonstrate a deep knowledge of Islamic law ( Fiqh ), both physically and Mentally flawless, male, of legal age, righteous, courageous and generous, as well as being able to organize. Theoretically, the determination is not made through the election or designation of the predecessor, but through self-proclamation ( daʿwa "reputation") of a pretender who believes that all conditions of legitimate leadership ( shurut al-imama ) are fulfilled.

Like the Twelve Shiites , the Zaidites consider ʿAlī ibn Abī Tālib to be better ( afḍal ) than Abū Bakr and Umar ibn al-Khattab , but unlike them they recognize their caliphate as legitimate, because this is what Alī himself has done.

Around the middle of the 9th century, al-Qasim ibn Ibrahim ar-Rassi (died 860) founded his own Zaidite school of law. This has only survived in the northern regions of the Republic of Yemen. On the theological level, the Zaidites have always cultivated the rationalistic teaching of the Muʿtazila .

The Zaidīya developed in the 9th century from the merging of two earlier Shiite groups in Kufa , the Butrīya and the Jārūdīya. The name of the Butrīya is traced back to a certain Kathīr an-Nawwāʾ (d. 754) with the surname al-Abtar . He and his followers originally belonged to the circle of Muhammad ibn ʿAlī al-Bāqir , but later renounced them. With regard to early Islamic history, their views were as moderate as those of the later Zaidi: although they considered ʿAlī to be the best ( al-afḍal ) of all Muslims according to the Prophet , they recognized the caliphate of Abū Bakrs and ʿUmars as legitimate, since ʿAlī paid homage to them would have. Zaid ibn Alī himself also seems to have held this view. When he went from Medina to Kufa in 739 and called on the Shiites to rebel against the Umayyads , most of them soon fell away when they saw that he was not ready to revile the first two caliphs.

The Jārūdīya is named after Abū l-Jārūd, who also belonged to the circle of Muhammad al-Bāqir. In contrast to the Butrites, he and his followers did not recognize the caliphate of Abū Bakr, ʿUmar and ʿUthmān because they believed that īAlī and his descendants had been appointed as successors directly by Mohammed. Abū l-Jārūd himself derived this from the report on the Cursed Ordal ( Mubāhala ) with the Christians of Najran , in which Mohammed and his family had submitted to a divine judgment . According to Shiite tradition, his daughter Fatima , her husband Ali ibn Abi Talib and their sons Hasan ibn Ali and Husain ibn Ali were present. The statement in sura 33:33 that God wants to purify the “people of the house” Ahl al-bait , related Abū l-Jārūd to this event and concluded that the claim to the imamate is inherited only in the descendants of Hasan and Husain . Based on this theory, Abū l-Jārūd rejected the majority of the Prophet's Companions because they had not supported the rightful Imam .

In the Jārūdīya the doctrine has already developed that among the descendants of Hasan and Hussain the one to be recognized is who took up the sword and fought for power. On this basis, the Jārūdites supported Zaid's uprising in 740 against the caliph Hishām as well as several later Alidian revolts, including the uprising of Muhammad an-Nafs al-Zakīya in 762.

It was not until the middle of the 9th century that the Zaidīya developed into a closed Shiite community. The scholar Qāsim ibn Ibrāhīm ar-Rassī (d. 860), who developed his own Zaidite theology based on the rationalism of the Muʿtazilites, played a part in this.

On the south coast of the Caspian Sea , in Tabaristan , the Zaidis succeeded in 864 in establishing a small principality, which, however, was of little political importance. The most important ruler of this Hasanid local dynasty (see list of rulers ) was the Imam al-Utrush (10th century), whose teaching differed in some points from that of the Yemeni Zaidis.

The Yemeni Zaidite imamate and his dogmatics go back to a descendant of Hasan named al-Qasim ibn Ibrahim ar-Rassi, who lived in Medina in the 9th century. When his grandson Yahya al-Hadi came to northern Yemen in 897, he founded a principality with the capital Sada , whose first ruling dynasty is known as the Rassids. Although the Zaidis had to assert themselves against attacks by the Yuʿfirids , Sulaihids and Hamdanids , their imams were to remain in power until 1962. Every now and then they also succeeded in conquering Sanaa and extending their rule beyond the Yemeni mountainous country. After the fall of the Sunni Rasulids (1454) even southern Yemen could be subjugated. 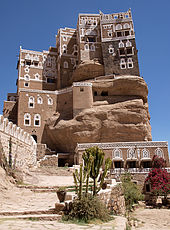 With the discovery of the sea ​​route to India , Yemen came increasingly into the focus of European trading powers. Initially, attacks by the Portuguese (1513) and Mamluks on Aden (1515–1517) could be repulsed. After conquering Egypt , the Ottomans also began conquering Yemen. Although they succeeded in occupying Aden, the mountainous region (until 1548) could only be subject to very high losses. Between 1537 and 1600, 70,000 Ottoman soldiers are said to have died in Yemen alone.

Towards the end of the 16th century, the Ottomans grew into a new and more dangerous adversary with the prophetic descendant al-Qasim ibn Muhammad. Al-Qasim declared himself in 1597 in the province of "asch-Sharaf" (northwest of Sanaa) to the imam (ie the religious and political leader of the Muslim community) and called on the population to jihad against the Ottomans. Under his son al-Muayyad Muhammad (1620–1644), Zaidite troops, which were mainly composed of tribal people, forced the Ottomans to evacuate the country, thus establishing the Qasimid dynasty. After heavy fighting, the last Ottoman troops withdrew from Yemen in 1635.

After the Ottoman withdrawal, the Zaidis under Imam al-Mutawakkil Ismail (1644–1676) were able to reunite all of Yemen as far as Dhofar . During this time there was a great economic boom through the cultivation of coffee and its trade. The center of the flourishing coffee trade was al-Mucha (German: Mocha), in which the Dutch , English and French established trading branches. In the 18th century, however, South Yemen was able to break away from the Zaidite imamate. During this time, a new traditionalist school was formed within the Yemeni Zaidīya, to which Muhammad ibn Ismāʿīl al-Amīr (commonly known as Ibn al-Amīr, d. 1779) and asch-Shaukānī (d. 1834) belonged. They set themselves apart from the earlier Zaidīya in that they recognized the Sunni hadith works and regarded them as authoritative.

Badr ibn Ahmad (center), the last ruler of the Zaidite Kingdom of Yemen

At the beginning of the 19th century, Yemen came again increasingly into the focus of the regional and international great powers. Initially the Wahhabis occupied the Tihama (1803) but were replaced by the Egyptians (1821-1840). This in turn led to the occupation of Aden by Great Britain , who wanted to secure access to the Red Sea (1839). In the period that followed, South Yemen was to undergo a separate development under British rule.

In North Yemen , the Zaidis came under the rule of the Ottomans again after 1872. However, after a violent guerrilla war by the Zaidis, they had to recognize Imam Yahya Muhammad Hamid ad-Din (1904–1948) as the de facto ruler in North Yemen. But this and his successors did not succeed in modernizing the country. Because of the conservative rule of the kings, the monarchy was overthrown in 1962 and the Zaidite dynasty ended.

The best-known representative of this religious community in Germany was Sven Kalisch (formerly Muhammad Sven Kalisch), who temporarily held the first chair for the training of Islamic religion teachers in Germany. Several daily newspapers wrote that Mr. Kalisch publicly stated that he is no longer a Muslim. He also dropped his Muslim first name "Muhammad" (adopted after his conversion to Islam). This makes him one of the most prominent apostates in Germany.