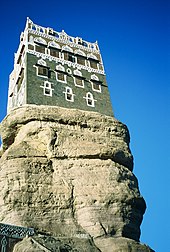 The Imam's residence in Wadi Dhar

Yahya expelled the Ottomans from North Yemen in 1904 and was recognized by them as ruler in 1911. Northern Yemen gained independence in 1918. After being recognized by the United Kingdom , Yahya assumed the title of king in 1926 and began modernizing the country.

In 1934 there was a war with Saudi Arabia over the province of Asir , whereby Yemen could not enforce its claims. Saudi Arabia won the war that killed around 2,100 people. Yahya was murdered in a palace riot on February 17, 1948. He was succeeded by his son Ahmad ibn Yahya .