The Caspian Sea lies within the great Aralo-Caspian lowland in western Asia and in the far east of Europe. In the north it borders on Russia and Kazakhstan , in the east on Turkmenistan , in the south on Iran and in the west on Azerbaijan .

Since the Caspian Sea is not a sea in the legal sense, it is not subject to the 1994 Convention on the Law of the Sea .

On August 12, 2018, the heads of state and government of the neighboring states of Azerbaijan , Iran , Kazakhstan , Russia and Turkmenistan agreed in a framework agreement in Aktau (Kazakhstan) that the Caspian Sea should be used under its own legal status - neither as a lake nor as a sea. The agreement has yet to be ratified by the parliaments. In addition, the division of the seabed needs to be specified.

Previously, contracts from 1921 and 1940 regulated shipping and fishing only between Iran and the Soviet Union . These defined the Caspian Sea as inland waters with the right of common use . The states of Azerbaijan, Kazakhstan and Turkmenistan, which emerged with the collapse of the Soviet Union , have seen themselves at a disadvantage since then. They sought extraction rights for crude oil and natural gas as well as the right to lay pipelines for this purpose. Russia was important in the agreement that no armed forces from third countries - especially NATO - get access. Due to US sanctions, Iran was keen to complete the negotiations that began in 1996.

The oldest cultural evidence can be found on inscriptions on Assyrian pottery and call a "southern sea". Hekataios of Miletus mentions it in the 6th century BC. BC as "Caspian and Hyrcanic Sea"; the first popular name refers to the Caspi tribe who lived on the southwestern bank of the Caspian Caucasus, in today's Azerbaijan, the second refers to the bank near Hyrkanien , a landscape on today's Iranian and southern Turkmen coast. Other ancient names are the ethnonyms "Alban", "Joshgun" and "Hyrcan". The changing history of settlement led to numerous other names such as B. the Tatar designation "Ag Deniz" (White Sea, cf. also Khazar Sea and mix-ups, e.g. "Blue Sea" in old Russian documents with the Aral Sea) or "Kasar Danizi" in the Turkish-speaking Khazars who lived in the 5th Settled northwest to the 10th century. In total, different peoples have given the lake around 70 different names, including less established terms such as "Baku Sea" in the 14th and 15th centuries according to the economic importance of the city of Baku at that time.

The Caspian Sea is - depending on the definition - part of the border between Europe and Asia and thus divides Eurasia into two continents. For the course of this border, see under Inner Eurasian border .

The area of ​​the Caspian Sea is 386,400 km², making it the largest land-enclosed water area on earth or its largest lake . The area of ​​the Caspian Sea roughly corresponds to the area of ​​Germany and Belgium or the Baltic Sea without the Kattegat . Its north-south extension is 1200 km, its west-east extension is 435 km (on average 300 km). While the large northern part is only about 6 m deep on average, its deepest point in the south is 995 m. Because its water surface is 28 m below sea level , this maximum depth is 1023 m below sea level , making it the second deepest natural depression on earth after Lake Baikal , the bottom of which is 1182 m below sea level .

The Caspian Sea has no natural connection with the oceans. It is therefore a lake and is called " sea " only because of its size and the salinity of the water. A previously common name was Caspisee. However, there is a navigable connection via the Volga , the Volga-Don Canal and the Don via the Sea of ​​Azov to the Black Sea , via the Volga, the Volga-Baltic Sea Canal , Lake Onega and the Neva to the Baltic Sea and branching off from Lake Onega via the White Sea Baltic Canal to the White Sea .

The Caspian Sea, like the Black Sea and Aral Sea, is a remnant of the Paratethys , an inland sea that stretched from Western Europe to Central Asia during the Oligocene and most of the Neogene . Towards the end of the Miocene , a border with the Black Sea developed, and since the beginning of the Pliocene there has been a series of strong water level fluctuations, which greatly varied the size. When the water level was low, the Caspian Sea shrank to a lake in the deepest areas in the south; when the water level was high, it was reunited with the Black Sea. This happened for the last time at the end of the ice ages, when the ice masses of the Siberian glaciers thawed and the Manytn lowlands were flooded. To the east, a connection to the Aral Sea was established in the Aralo-Caspian lowlands .

There was never a direct connection to the ocean, because at the time of its connection with the Caspian Sea, according to popular belief, the Black Sea was separated from the Mediterranean. 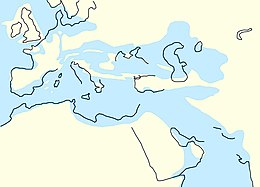 Paleogeography of the western Tethys region and its surroundings during the Oligocene . The Paratethys ended in southern Europe and was replaced by the Mediterranean Sea, and you can also see the outlines of the Black Sea , the Caspian Sea and the Aral Sea.

Changes in the water level

In the 20th century, the water surface decreased dramatically from the early 1930s to the 1980s; At the beginning of this period, the lake area is said to have been around 420,000 km². The sinking of the lake level took place mainly in the years 1930–1941 and 1970–1977 at a rate of 16 and 14 cm per year, respectively, a total of around three meters, since the beginning of the records and its provisional high in 1896 even by 3.5 m . The water masses that were fed into the lake by the Volga , Urals and Kura were not sufficient at that time to maintain its water content; the withdrawal of water for irrigation purposes was enormous at its few tributaries and the evaporation that arose on the huge water surface caused its content and thus its size to constantly shrink. Part of the responsibility was also the construction of the large Volga barrages, which increased the area of ​​evaporation of the Volga so that the Volga, as the main tributary, could feed in less water.

The Kara Bogas Bay , a formerly very shallow but large eastern bulge of the Caspian Sea, was sealed off by a dam at the narrowest junction in 1980 because evaporation was particularly high in this dry, hot area. After the dam was built, the lagoon dried up completely and turned into an environmentally dangerous salt desert. Since the installation of locks between 1985 and 1991 did not improve the situation significantly, the dam was removed in 1992.

Between 1978 and 1994 the lake level rose steadily and intensely at an annual rate of 14 cm to 40 cm. During this time, this led to extensive flooding of the mainland in a width of 5–25 km and over a length of 1500 km. This flooded 2 million hectares of land. The damage was estimated at around 12 billion US dollars, affecting a million people.

The Caspian Sea near Baku (Azerbaijan)

The Caspian Sea in the Māzandarān Province (Iran)

The Caspian Sea near Ramsar (Iran). Remnants of privacy screens that divided the beaches between men and women.

The Caspian Sea near Türkmenbaşy ( Turkmenistan )

The rise in the water level by over two and a half meters led to a temporary maximum in 1995 and has since stagnated, apart from minor changes. The reasons for the strong fluctuations are widely discussed. The most likely explanation lies in changes in the water balance. It is significantly influenced by the Volga (it is responsible for about 80 percent of the water inflow) and by the extensive evaporation areas v. a. in the north and in Kara Bogas Bay. The statistically significant correlation with secular changes in drainage through the Volga was investigated by Rodionov in 1994. The water balance is influenced by numerous other causes that have been responsible for fluctuations of up to six meters over the past 2500 years. For Ramiz M. Mammedov from the Geographic Institute of the Academy of Sciences in Baku it is clear that of the three factors geology, man and climate, the climate factor plays the most important role. Seasonal level fluctuations of around 40 cm are not included in the investigation of the long-term effects, but are significant in the short-term threat to coastal industrial plants. The following factors are mentioned for the development of the water balance and its further effects:

The rise in the water level has placed the neighboring countries with the need to protect the settlements and industrial facilities in the flooded areas. The areas of intensive oil and gas production and industrial landfills with dangerous goods are particularly threatened. The prediction from 2002, which predicted a further increase of 2.30 m by 2010, has apparently not come true. Russian hydrometeorologists, who are based on known data from climate history, predicted an increase of 4.5 to 5 meters by 2050, which would particularly affect the coastal plain of Azerbaijan. However, the interaction of the many different factors for reliable forecasts has not yet been adequately researched.

There are numerous islands in the Caspian Sea. Most are small and unpopulated, but there are some populated ones as well. Many of the islands near Azerbaijan are significant because of their oil reserves.

The Bulla Island off the coast of Azerbaijan has significant oil deposits. The same goes for Pirallahı Island . The first oil drilling in the Caspian Sea took place here and one of the first oil discoveries in Azerbaijan was also made here.

Nargin , the largest island in Baku Bay , is a former Soviet military base. Ashūradeh is located at the eastern end of the Miankaleh Peninsula northeast of the Gorgan Bay near the Iranian coast. Ashuradeh was separated from the peninsula by a canal.

In the northeast of the Caspian Sea are the Tjuleni Islands (Seal Islands).

The island of Chechnya and Seal Island are located off the coast of Dagestan .

Some islands are located off the coast of the Volga Delta and belong to Kalmykia and Astrakhan Oblast , or to the Atyrau region in Kazakhstan.

The islands that belong to Russia, such as Verkhny Oseredok , are located in the border zone of the Russian Federation and cannot be entered.

In Baku , in particular, there are very large reserves of oil and natural gas under the sea floor . Geologists suspect between 15 and 50 billion barrels of oil on the bottom and on the coasts of the Caspian Sea. Optimistic estimates are up to 100 billion barrels, which should represent a value of five trillion US dollars.

In the Kara-Bogas bay salt is mined.

The Caspian Sea is one of the largest tributaries

In the north, where the two main tributaries, the Volga and Urals, confluence, the salinity is very low; towards the south, where there are hardly any significant tributaries, it rises: the maximum, at over 30%, was found in the salt deposits in the Kara-Bogas Bay ( Kara-Bogas-Gol ) in Turkmenistan . On average, the salt content is 1.1 to 1.3%, which is around a third of the concentration in the oceans.

About 150 species of fish live in the Caspian Sea, mainly freshwater fish despite the brackish water . The various sturgeons and numerous fish species imported for fishing purposes are of particular economic importance . A culinary specialty of the Caspian Sea is the sturgeon, from which caviar is obtained. There are also plenty of z. T. endemic herring relatives and wild carp . The Caspian seal is an endemic seal to the Caspian Sea.