The angelfish is a popular freshwater aquarium fish.

Freshwater fish inhabit the inland waters, lakes and rivers of the continents and islands. Almost all freshwater fish belong to the bony fish (Osteichthyes). Some types of rays of the cartilaginous fish (Chondrichthyes) live permanently in fresh water . There are also a few species of shark that occasionally migrate up the estuaries into fresh water. 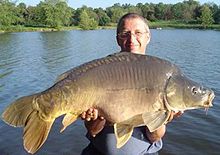 The carp is a primary freshwater fish.

Primary freshwater fish have completed a large part of their tribal history in freshwater, have completely lost their salt tolerance and cannot swim in the sea or in very brackish water . Salty waters therefore represent barriers to spread for this group. They represent around 33% of the total fish fauna . There are mainly fish from the orders of the tetras (Characiformes), carp-like (Cypriniformes) and catfish-like (Siluriformes), which are grouped together to form the Ostariophysi . The Ostariophysi have developed special adaptations to life in freshwater, e.g. B. particularly good hearing. With well over 6000 species, they make up two thirds of all freshwater fish.

The secondary freshwater fish descend from marine ancestors that migrated into freshwater. You still have a weak salt tolerance. They make up about 8% of the total fish fauna. Cichlids (Cichlidae) Cyprinodontiformes (Cyprinodontiformes) and Atheriniformes (Atheriniformes) belong to this group. Their representatives often dominate bodies of water with very hard water or bodies of water whose pH value is very high, such as the rivers of Central America or the great East African lakes. The fish fauna of the rivers and lakes of Australia consists exclusively of secondary freshwater fish , with the exception of the Australian lungfish ( Neoceratodus forsteri ) and a few other species. Also, Madagascar , New Guinea , Sulawesi , the Lesser Sunda Islands and the Antilles were populated exclusively by secondary freshwater fish. Oceanic islands that are never connected to the mainland also have, if at all, a fauna of secondary freshwater fish, which is mainly found here by the goby family (Gobiidae). 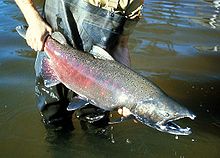 The salmon migrates back into fresh water to spawn.

The living conditions in freshwater are often subject to strong fluctuations. Depending on the season, rivers can carry different amounts of water. Lakes can dry out and the temperature can change. Previously connected waters can be separated from each other by geological events. All of these factors affect the fish fauna. The separation of a population into geographically isolated areas leads to the formation of new species. This is how so-called swarms of species often arise , e.g. B. in the salmon-like species of the Coregonus genus in Northern and Central Europe and in the Central American viviparous toothcarps of the genus Xiphophorus .

In contrast to the sea, fresh waters are mostly relatively shallow. The Lake Tanganyika and Lake Malawi in East Africa with 1,470 meters and 704 meters, although very deep. But higher life is no longer possible below 200 meters. Because of the lack of water circulation, the lakes at these depths are almost without oxygen (anaerobic). Only in the Siberian Lake Baikal is there the Baikal oilfish ( Comephorus ), a fish fauna adapted to life in great depths.

According to the IUCN report, 200 of the 522 European freshwater fish species are already classified as threatened.

In contrast to marine life, freshwater fish with their various species and subspecies usually have a very small distribution area. They often live in small, isolated lakes or endemic to islands and their small river systems . One extreme is the habitat of the devil's pup ( Cyprinodon diabolis ), which only lives in a small limestone basin measuring 5 m × 3.5 m × 3 m in Nevada (USA). The restriction of their range makes these fish populations susceptible to changes in their habitat that they cannot avoid.

A major reason for the extinction of freshwater fish has been the regulation of rivers and the drainage of wetlands . In recent years, there has also been climate change and water abstraction. In Europe, especially in the Mediterranean countries, more and more water is withdrawn for the irrigation of fruit and vegetable plantations in formerly dry areas. In summer this leads to partially dried-out river courses. Weirs, sand traps in the main end and dams of power plants can particularly endanger the migratory fish species.

Overfishing has become a problem in many parts of the world with population growth. The intensive fishing industry with the use of non-local fish, which displace native species, mix with regional subspecies or bring pathogens with them, harbors further causes for the threat to biodiversity. In tropical regions, wild-caught species of endemic species for keeping in aquariums contributed to the decline in populations.

In Eastern Europe, a lack of environmental protection measures was and is a major reason for the decline in species and individuals. Agriculture and industry are growing along rivers in many countries without appropriate measures to protect water and living beings.