Cichlids (Cichlidae) or cichlids are a family of bony fish from the group of perch relatives (Percomorphaceae). After the carp fish (Cyprinidae) and gobies (Gobiidae) the cichlids form with about 1,700 described species, the third largest fish family. Many species are popular aquarium fish because of their colorful appearance, complex behavior and easy care , some large species are important food fish .

In evolutionary biology , the study of cichlids has contributed significantly to the understanding of the mechanisms of speciation . The swarms of species of cichlids in Lake Victoria and their relatives in the neighboring African Great Lakes can be viewed as a model for a relatively rapid species development. In addition, cichlids are important research objects in behavioral biology .

Cichlids inhabit most of tropical Africa with around 900 described species ; another 400 previously undescribed species are suspected here. Several hundred species each occur in the East African lakes Malawi , Tanganyika (350 species) and Victoria (250–350 species). Here they represent the main component of the fish fauna. About 400 species live in Central and South America, four in Cuba and Hispaniola , and one in Texas . 17 species that are severely endangered live in Madagascar . In Asia , the cichlids are represented by only eleven to twelve types: three in South India and Sri Lanka , one in the south of Iran ( iranocichla hormuzensis ) and seven to eight in Israel and Jordan (valley of the Jordan ). The cichlids of India, Madagascar, Cubas and Hispaniolas also go in brackish water . Coptodon guineensis is the only cichlid species to be found in the sea from the mouth of Senegal to the mouth of the Kunene .

Some species became widespread as neozoa . The Mozambique cichlid ( Oreochromis mossambicus ) and even more so the nile lapia ( Oreochromis niloticus ) were introduced in many tropical countries for reasons of fishing ( aquaculture ). Their naturalization in several countries has negative ecological effects as they displace native species. Another cichlid, the Chanchito ( Australoheros facetum ) from the south of Brazil and the north of Argentina , has also spread in Europe, in the south of Portugal and Spain , and is now even found in some German lakes ( Baden-Württemberg and North Rhine-Westphalia ) .

The pike-shaped Crenicichla punctata shows an extreme in the variability of the cichlid body shapes .

The size of the cichlids ranges from three centimeters ( Apistogramma ) to 80 centimeters ( Boulengerochromis , Cichla ). Their basic shape is oval, somewhat elongated and laterally flattened, something like the red cichlid in the taxobox. Adapted to their respective habitat , however, the body shape can also differ greatly from the basic shape. The discus fish and angelfish that live between stilt roots in the Orinoco and Amazon basins are disc-shaped, while the angelfish also have strongly raised dorsal, anal and ventral fins. Other cichlids are pike-shaped ( Crenicichla ) or elongated ( Teleogramma or Julidochromis , hunting in rock crevices). Cichlids from Livingstone Falls or the sandy shores of Lake Tanganyika are similar to gobies. There are many transitional forms between these extremes. The shape of the mouth is adapted to the most diverse types of nutrition. It ranges from deeply split in predatory species (such as Crenicichla ) to strongly subordinate and specialized in ripping off rock growth (in Labeotropheus ).

In contrast to most other fish, cichlids have only one nostril on each side of the head. Its side line is interrupted, the front part runs parallel to the curve of the back on the upper half of the body, the rear part on the middle of the side down to the tail fin stalk. There are 20 to 50 scales along the sideline, in exceptional cases more than 100. In the single dorsal fin one can clearly distinguish between a hard-nosed and a soft part. It is supported by seven to 25 fin spines and five to 30 soft rays. The anal fin normally has three fin spines (in a few species four to nine, in Etroplus twelve to fifteen) and four to fifteen soft rays, in exceptional cases more than 30. The caudal fin is usually rounded or straight, in many cases, sometimes only in males, with filamentous outgrowths above and below. Only a few cichlids have a forked caudal fin.

The diets of the cichlids are very diverse. There are generalized predators, plankton eaters , upbringing eaters, herbivores and larvae eaters . In the lakes of the East African Rift Valley , specialization in nutrition can be seen and researched particularly well.

Many of the cichlids are primarily herbivores that feed on algae (e.g. Petrochromis ) and plants (e.g. Etroplus suratensis ). Small animals, like invertebrates , make up only a small part of their diet. Detritivors, to which the genera Oreochromis , Sarotherodon and Tilapia belong, eat various organic material.

Predatory cichlids eat little or no plant material. The predators are divided into specialists and generalists who hunt small animals such as fish and insect larvae. Trematocranus is, for example, on a specialized shell dwellers, while pungu of sponges fed. Some of the cichlids feed completely or partially on other fish. Pike cichlids ( Crenicichla ) are secret predators who pounce from a hiding place on fish swimming by, while Rhamphochromis species pursue their prey in open water. Some genera of the cichlids (e.g. Caprichromis ) feed on the eggs or juveniles of other species. To do this, the robbers sometimes ram the heads of mouthbrooders , which are forced to spit out their young. The cichlids with exceptional feeding strategies include Corematodus , Docimodus , Plecodus , Perissodus and Genyochromis mento , which feed on the scales and fins of other fish. This behavior is known as lepidophagia. Nimbochromis and Parachromis , who pretend to be dead and lie motionless until prey swims towards them and can be caught, show a special nutritional strategy .

Among other things, the structural diversity of the lower pharynx could be a reason for the appearance of the many species of cichlids. The convergent evolution took place over the course of time, synchronized with the different trophic niches .

The pharyngeal apparatus consists of two upper plates and a single lower plate, all of which have teeth that differ in size and type. The structure of the lower pharynx is often associated with the diet of the species.

In order to be able to crack shellfish , considerable pressure has to be generated, which is why the cichlids that feed on shellfish (e.g. the pike cichlid Crenicichla minuano ) have molar-shaped teeth and a reinforced pharynx. In order to be able to grab and bite shellless prey, the predators need conical, bent back teeth. Structural differences in the pharyngeal teeth were also found in the herbivorous cichlids. Cichlids that specialize in algae (e.g. Pseudotropheus ) tend to have small, conical teeth. Species that feed on pods or seeds need large conical teeth to chew their food.

In addition to the dentition, the shape of the lower pharynx also shows great variation.

The male fish of the species Oreochromis mossambicus usually react extremely aggressively when conspecifics invade their territory. In the constant turf war against the intruders, their blood concentration of sex hormones increases significantly. However, the concentration of these androgens increases not only in the fighters, but even in other males watching the fight. Through various experiments, Portuguese scientists led by Rui Oliviera from the University of Applied Psychology in Lisbon ( Portugal ) have found that territorial warriors mainly increase their hormone production when they have good prospects in a fight due to their smaller size or a recognizable injury to their rival to have a win. However, if they cannot clearly assess their chances of success, their hormone concentration will not change either. 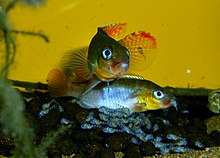 Most species show a well-developed brood care behavior for fish, both for the eggs and for the larvae. A distinction substrate spawners (with Offenlaichern and Höhlenlaichern) and mouthbrooders . Cichlids protect the eggs by keeping enemies away from clutches and larvae and by cleaning the eggs by "sucking off" and fanning. The more comprehensive and therefore more promising the brood care, the fewer eggs are laid. It often lasts until the young are several weeks old. In some of the species found in Lake Tanganyika , even the older siblings are involved in rearing the younger ones.

Depending on the way in which the parents participate in brood care, a distinction is made between the following family forms:

The cichlids were traditionally placed with some families of marine fish in the subordination of the wrasse-like (Labroidei) within the order of the perch-like (Perciformes). The relationship of the families is supported by the anatomy of the pharynx and gill region.

However, DNA sequencing does not reveal any relationship between wrasse , parrot fish and odacids on the one hand and cichlids, surf bass and damselfish on the other. The similar skull anatomy must have arisen independently of each other at least twice.

A new systematic group within the perch relatives , the ovalentaria , is therefore proposed for the cichlids, the earfish relatives, the surf perch and damselfish and some other taxa related to them . Surprisingly, Pholidichthys was identified as the sister group of the cichlids , a genus and family of eel-like elongated marine fish comprising only two species, which share with the cichlids the single nostril on each side of the head, a pair of adhesive organs on the top of the larvae and the intensive care of the brood. As a new order for the cichlids and Pholidichthys , the order Cichliformes named after the cichlids is used in current systematics .

The cichlids are divided into four subfamilies and a number of tribes . At the base of the family tree are the Etroplinae living in India and Madagascar and the Malagasy Ptychochrominae . The more than 1200 species of African cichlids all belong to the subfamily Pseudocrenilabrinae , the South and Central American ones to the subfamily Cichlinae .

Sympatric speciation (the emergence of new species in the area of ​​the original species (s)) can be found in cichlids in isolated lakes, e.g. B. in crater lakes in Nicaragua ( Apoyo , Masay ) and in the Barombi Mbo and Bermin crater lake (Cameroon). The cichlid species of these lakes each descend from an immigrant species, but today they differ significantly in their morphology and ecological niche . A allopatric speciation can be ruled out in these small crater lakes.

Fossil of Oreochromis lorenzoi from the Miocene of Italy

As fossils of five species of cichlid (genus Mahengechromis ) from a former small crater lake from the Eocene (46.3–45.7 million years) in Tanzania show, the family also formed swarms in the past.

By introduction of the Nile perch by man ( food fish ) in the Lake Victoria are now many of the endemic species living there on the Red List of the extinction of endangered species (see also Darwin's Nightmare ).

Importance for the aquarium hobby

In the middle of the 20th century, the chain of lakes in the East African Rift Valley and Lake Victoria were discovered by aquarists. The enormous number of endemic species in these lakes quickly led to great popularity in the aquarium hobby . Especially species from Lake Tanganyika and Lake Malawi ( Mbunas and utaka , non-Mbunas called) were exported to Europe and America.

Cichlids are best kept in pure cichlid tanks, for example in a biotope aquarium . It is particularly problematic that many of the species attack the plants kept in the aquarium . Only a limited number of plant species are available to aquarists who keep these species. These include the dwarf pear leaf .